If you’re a conservative person who has taken to Google to research topics and news items related to President Trump, you might have noticed that an overwhelming percentage of the top results seem to come from strictly left-wing sources.

Well, as it turns out, you’re not crazy or paranoid. Google really does seem to favor liberal outlets.

The actual numbers attached to this are astounding.

PJ Media’s Paula Bolyard’s recent study on the issue of Google bias suggests it’s the latter. Bolyard found that of the first 100 results provided by Google for “Trump news,” nearly all were from left-leaning outlets.

Bolyard notes that “Google has maintained that all outlets are treated fairly, but nevertheless, conservative sites have reported reduced search traffic and, in the case of Google-owned YouTube, content creators have been banned and demonetized.” The suspicion that left-wing bias pervades the company was only heightened by the famous firing of conservative James Damore.

To test the bias theory, Bolyard searched for Trump using the news tab and then used the following “left” vs. “right” leaning chart provided by former CBS News reporter Sharyl Attkisson to designate the political slant of each site: 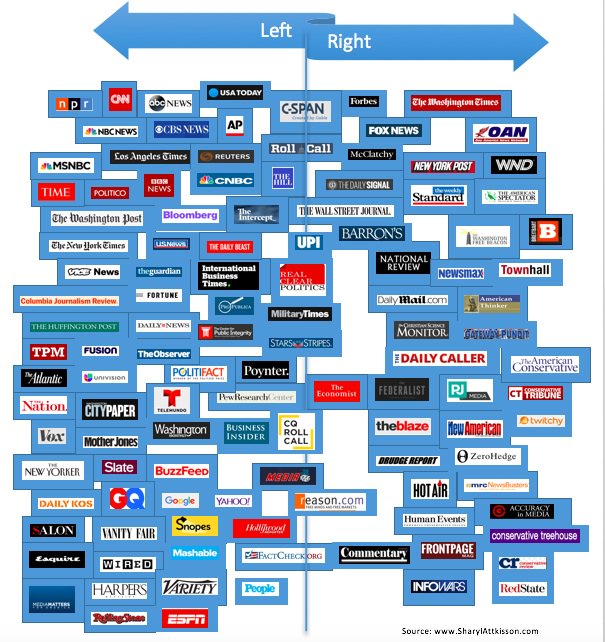 The apparent bias was “much worse” than she expected. Out of the first 100 results, only five stories by right-leaning sites made Google’s search results: three by the Wall Street Journal and two by Fox News.

Bolyard notes that Google is constantly tweaking the algorithm. One significant change in May 2017 particularly impacted PJ Media, she writes, claiming that the site, along with other conservative sites, has “yet to recover the lost traffic” from that change.

This is pretty crazy, but it’s hardly surprising. Google has not at all been shy about their support for liberal causes and politicians, especially in light of the election of Donald Trump to the office of president.

The real question to focus on is whether their algorithm is purposefully targeting conservatives or not and whether or not it’s okay for the company to limit the freedom of expression of conservative news outlets.

The answers to these questions may seem obvious, but things aren’t always what they seem.

'I've gotten a big earful on this from clear across the state, it's not even from that neighborhood,' the state agriculture commissioner said.
By Andrew Jose, The Western Journal  July 4, 2022 Comment MoreShare

The government claims that its crackdown on farmers amid a global food crisis is an 'unavoidable transition' to improve the environment.
By Andrew Jose, The Western Journal  July 4, 2022 Comment MoreShare

'The issue is, these aren’t just any recalls: These are serious and, most worryingly, basic problems - an engine combusting, a tire rolling off.'
By Jack Davis, The Western Journal  July 4, 2022 Comment MoreShare