President Trump recently held a rather lively rally in Tampa, Florida earlier this week, with thousands of passionate supporters filling up the venue, chomping at the bit to hear the commander-in-chief obliterate his critics, draw attention to his accomplishments, and outline what else he wants to accomplish with his time in office.

As you might expect, there was plenty of comedy to go around in the crowds who were more than ready for a little audience participation, doing some heckling and chants about Hillary and of course, the 2020 election. Half way through, Trump decided it was time to go after the media, heckling them in the press pen as “fake news.”

All of the fun being had by the crowd that showed up to the event earned the ire of liberals everywhere, especially fellow reporters and celebrities who called the president and his supporters “Nazis” and wanted them to be “euthanized” after the rally.

Gee, what a bunch of lovely, tolerant folks.

On of the favorite targets of the audience was CNN’s Jim Acosta, who tweeted multiple videos of the crowd mocking him before and after the rally. Acosta blamed Trump for the vitriol, saying “I’m very worried that the hostility whipped up by Trump and some in conservative media will result in somebody getting hurt.” The tweet showed Trump supporters jeering at Acosta after the rally.

The tweet quickly went viral with many celebrities and journalists insulting the supporters. Celebrated composer Christopher O’Riley, who is a regular on PBS and NPR, literally called for the enforced slaughter of Trump supporters. “Calling them Deplorables is euphemizing them. Maybe better to euthanize?” the verified twitter user quipped.

Just a sample of the sad scene we faced at the Trump rally in Tampa. I’m very worried that the hostility whipped up by Trump and some in conservative media will result in somebody getting hurt. We should not treat our fellow Americans this way. The press is not the enemy. pic.twitter.com/IhSRw5Ui3R

Celebrated composer Christopher O’Riley, who is a regular on PBS and NPR, literally called for the enforced slaughter of Trump supporters. “Calling them Deplorables is euphemizing them. Maybe better to euthanize?” the verified twitter user quipped. 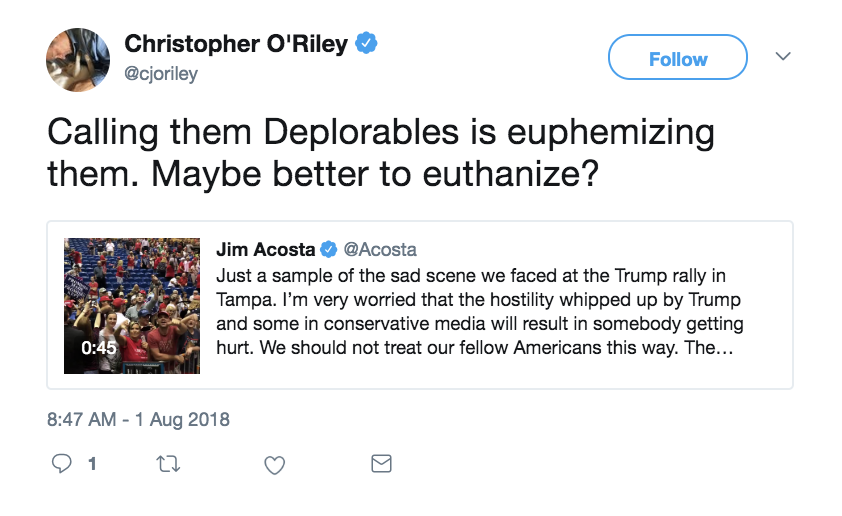 Other verified handles of celebrities and reporters were just as vulgar, likening the Trump supporters to Nazis, KKK members, white trash and Hitler while speculating the crowd will eventually commit murder. Others said the Trump supporters made them “ashamed” of America.

This is sad and yes Jim @acosta also dangerous. I fear for the safety of journalists and for the American people who are being manipulated by #Trump. He will one day be long gone but he will leave a society divided and full of hatred and poisoned hearts. https://t.co/Bpp1LI9dlQ

This scene looks like a modern day Ku Klux Klan rally. Amazing to see that @realDonaldTrump – the man occupying the #WhiteHouse – is so comfortable in this atmosphere of hateful hostility, bigotry & deplorable language. #GodBlessAmerica https://t.co/4HQUtMuko2

As an American citizen, this video depresses and angers me. As a working journalist, it terrifies me. @Acosta: Keep doing your job. Millions of us out here still appreciate your hard work and your quest for the truth. #HumanityFirst https://t.co/O8j2CV3edt

I'm truly ashamed that this is what America has become.

Replace the MAGA hats and Trump signs, and this is straight out of any number of authoritarian regimes where journalists are killed.

I feel like a foreign correspondent in my own country. https://t.co/DyEaefnb7S

Trump's endless vilification of the media will almost certainly lead to vigilante violence against journalists.

If Trump succeeds in weakening American institutions sufficiently, he could wage an Erdogan-style crackdown on his media critics and independent journalists. https://t.co/MZykJccKwP

What’s utterly hilarious about all of this hoopla is that most of these tweets are boohooing about Trump and his followers being “full of hate,” meanwhile many of their own folks are wishing death and murder on folks for simply believing a different political ideology than their own.

How is it the irony goes completely undetected by these people? You really have to be so absorbed into your self that you can’t see the forest for the trees, which is remarkable, really. So brainwashed by liberalism, instilled in their hearts long ago through public schools, they can’t even distinguish their own hypocrisy.

Biden spoke truthfully and - based on some of his statements from previous years - what he believes at some heart level.
By Randy DeSoto, The Western Journal  July 4, 2022 Comment MoreShare
Next