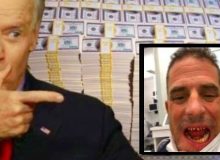 Rubio: American Families are Under Attack
The Floridian

Even as the Biden administration insists that despite media reports to the contrary, it will not provide crack pipes to drug users as part of a “harm reduction” program, two Republican legislators are proposing legislation to ensure that’s the case.

Reps. Lauren Boebert of Colorado and Dan Bishop of North Carolina introduced the Halting the Use of Narcotics Through Effective Recovery Act.

The HUNTER Act is a not-so-subtle reference to Hunter Biden, the son of President Joe Biden whose drug addiction was a dark and well-documented chapter in the family history.

The Biden administration opened the door for the HUNTER Act when it rolled out a $30 million program to make sure drug addicts do not harm themselves. In addition to condoms, syringes and fentanyl strips, so-called “smoking kits” will reportedly be distributed to drug users through the program.

The Biden administration has said that claim is incorrect, but Bishop is not buying it.

“Whenever they are caught red-handed, they use the phrase ‘misinformation’ or ‘disinformation’ to stop the American people from calling them out,” Bishop said, according to Fox News. “That’s what’s happening.”

I never in my life thought I would have to say this, but the proper role of government is not to fund the distribution of crack pipes.

Did Hunter come up with this bullcrap?

“The HUNTER Act is a means of encapsulating how ridiculous public policy can become when it’s in the hands of the woke,” he said.

Boebert said tax dollars should not go up in the smoke of a crack pipe.

“Our tax dollars should not be funding the death and destruction of crack addicts. Democrats are always putting the American taxpayer last and Republicans just want to give people in need a good job. Democrats want to give them crack pipes,” she said.

“Congressman Bishop and I are standing up and saying, ‘Heck no,'” Boebert added.

Bishop said he has a problem with efforts to “remove all stigma” from drug use when “actually stigma is not a bad thing.”

After getting caught, Biden now claims that American taxpayers won’t be funding crack pipes after all.

But just to be safe, @RepBoebert & I are introducing the HUNTER Act, which ensures your tax dollars aren’t subsidizing woke drug policies. https://t.co/Ax7WNupOyg

As for the name? Boebert admitted that it was very intentional.

“I like the HUNTER Act … because it was a better acronym than Stop Paying to Subsidize Biden’s Son’s Drug Addiction Act. That didn’t really flow. I think tax dollars have been on the hook for Hunter’s addictions long enough,” she said.

A Senate bill, the Cutting off Rampant Access to Crack Kits (CRACK) Act, has a similar purpose.

The bill, supported by Republican Sens. Marco Rubio of Florida, Tim Scott of South Carolina and John Kennedy of Louisiana wants to ban the use of American Rescue Plan funds to hand out drug paraphernalia.

The White House declined to comment on the HUNTER Act.

An aluminum mill in Kentuckysent a letter stating it must 'be able to purchase reliable, affordable electric power'.
By Jack Davis, The Western Journal  August 13, 2022 Comment MoreShare

The FBI reportedly received a tip that documents related to nuclear weapons were being stored at Mar-a-Lago.
By Elizabeth Stauffer, The Western Journal  August 13, 2022 Comment MoreShare

This Saudi Arabian businessman collapsed and died in the middle of giving a speech at a conference in Egypt.
By Abby Liebing, The Western Journal  August 13, 2022 Comment MoreShare

The IRS doesn't need a bigger budget and more manpower. In fact, it needs to be abolished.
By Mitch Behna, The Western Journal  August 13, 2022 Comment MoreShare

A news report states the FBI was operating on inside information. A Trump attorney called the warrant 'thin' on supporting documentation.
By Matthew Holloway, The Western Journal  August 13, 2022 Comment MoreShare

If the search warrant does not prove the FBI raid on Mar-a-Lago was necessary, Garland may face some serious problems.
By Grant Atkinson, The Western Journal  August 13, 2022 Comment MoreShare

America is drifting perilously closer to fascism. Soon enough, it may be too late to undo the damage.
By Dan Backer, The Western Journal  August 13, 2022 Comment MoreShare

A Ukrainian national who killed seven members of the Jarheads Motorcycle Club in 2019, has been found not-guilty of all homicide charges.
By Jack Gist, The Western Journal  August 13, 2022 Comment MoreShare
Next