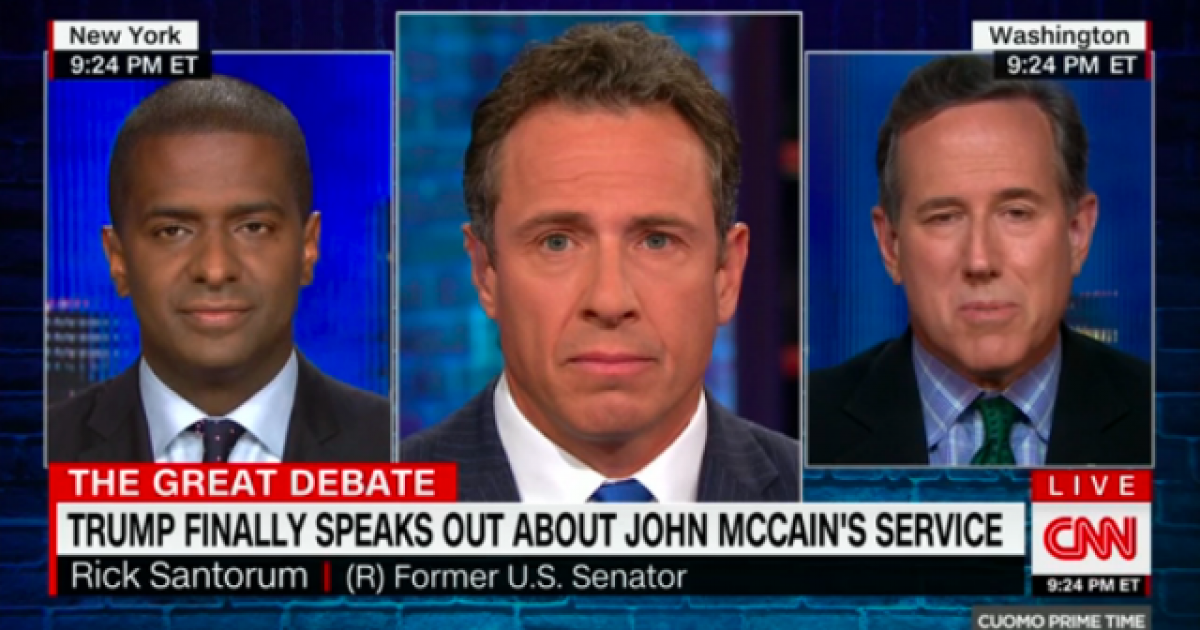 The media is always on the prowl for some new way to take a figurative sledgehammer to President Trump and bash him three ways from Sunday, so it should be no surprise that since the passing of Sen. John McCain over the weekend, news outlets have been doing their best to find some way to use this tragedy as a means to attack the president.

Former presidential candidate Rick Santorum made an appearance on Chris Cuomo’s show on CNN where he called the media out for this kind of shenanigans. You can pretty much guess how the panel responded. It wasn’t pretty.

“I just don’t think it does anything to the memory of John McCain to use him as a cudgel to beat up the president,” Santorum told Cuomo. “The media seems to have this fascination to try to use the death of John McCain to further belittle and beat up Donald Trump.”

Cuomo shot back, saying, “You think we need to do that to find reasons to criticize the president? This is a moment that matters.”

Bakari Sellers then accused the GOP of becoming a party of “cowardice” under President Trump, with members trying to “contort themselves into pretzels” as they defend Trump’s behavior.

“The fact is, you have John McCain who is a war hero. Even my Democrats, even the people on the left who want to chastise him for whatever his policy may have been, we’re saying that now is not the time,” he said. “You have a president this week who did not stand up and show the best of what we can be, and that’s a problem. John McCain deserves all the glory today.”

Sellers added: “You don’t have to kowtow like Rick’s doing right now on TV and make excuses for a president who does not deserve excuses.”

With that, Santorum referenced Cuomo’s brother, Andrew, castigating America as being “never that great” in a speech last Wednesday. It was then that the panel erupted into a schoolyard slap-fest.

Santorum is absolutely spot on here. The mainstream media will do anything within their power to find something to justify some sort of attack on President Trump and his administration. Even when he does good things, they still find a way to flip it and make it negative.

Right now, Trump bashing sells. They play it all off as if it is some sort of crusade to rid the world of corruption and evil, but at the end of the day, it’s about two things: money and the progressive agenda.

The left-wing media is nothing more than propaganda producers for the Democratic Party. They are likely rewarded in many ways for their service and are thus willing to sell out the American people to get ahead. Tragic, really.