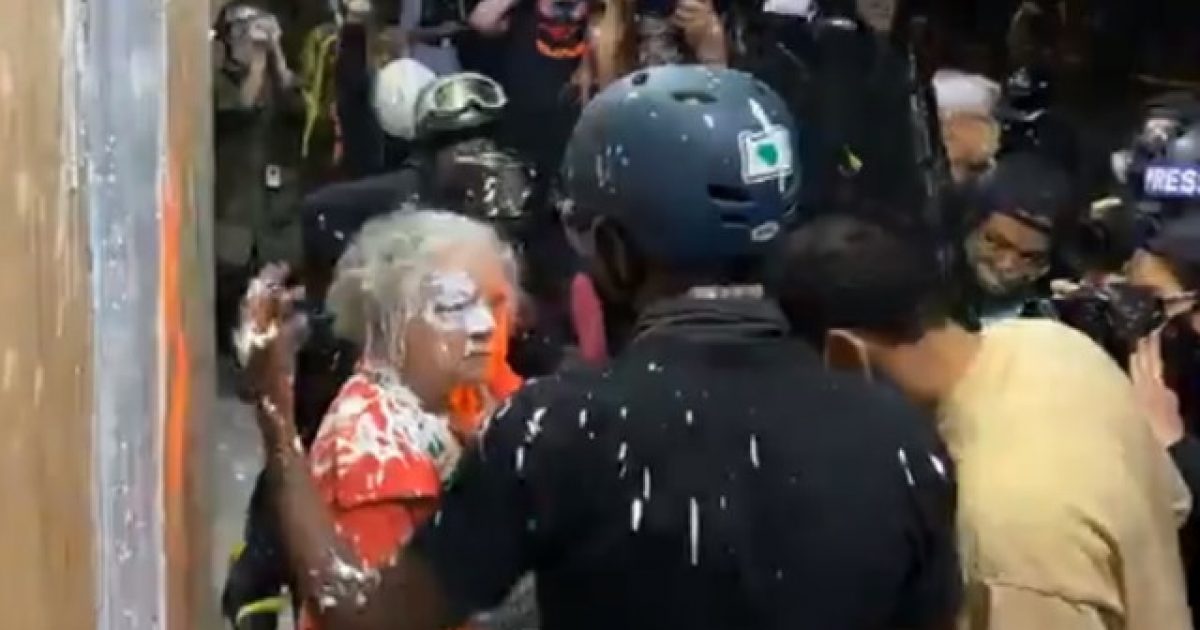 Rioters — oops, I mean, “peaceful protesters” — once again stormed a Portland suburb, this time opting to set their sights on harassing elderly counter protesters by tossing paint all over them among many other heinous deeds.

Folks, there’s nothing peaceful about these people. It’s clear they are not interested in trying to win people over to their point of view. They want to force you to comply with their sick and twisted vision for the future of this country and if you resist, you will be beaten into submission.

Once again, the Portland Police Department was forced to declare a supposed protest an “unlawful assembly” after assessing that the intent of the rioters was “to vandalize or attempt to burn down the precinct.”

The Portland Police Department tweeted out a photo of the elderly woman whom the rioters doused with paint and noted in a subsequent tweet that they incorrectly stated that she was the woman using a walker, when in fact it was another elderly woman who was present.

This unknown woman using a walker was confronted by the group currently outside East Precinct and paint was strewn all over her. pic.twitter.com/k1cCVMbNht

Portland Tribune reporter Zane Sparling took videos of the incident that showed the rioters aggressively confronting the two women and showed the woman covered in paint.

Counter protesters in standoff with Portland protesters; she was doused in paint I believe pic.twitter.com/08ceieWh3t

Journalist Andy Ngo, who has had his fair share of violent run-ins with the terrorists in Antifa, took the time on Twitter to highlight the hostility being displayed toward the two women from these miscreants.

An older woman tried to stop #antifa rioters from continuing their attack on the Portland Police east precinct tonight. She stood in the front and they dumped some white liquid all over her & curse her out. #PortlandRiots pic.twitter.com/fYEu08DOfJ

Antifa militant stops an elderly woman from putting out a fire they started at the Portland Police east precinct. #PortlandRiots pic.twitter.com/RBGb5cNu3g

How much more of this insanity is going to be allowed to continue unchecked by Democratic leadership in Portland? It’s time to step up to the plate and shut these people down and restore law and order. If that means requiring help from federal resources, so be it.

We just cannot allow this kind of violence to continue and spread across the country.