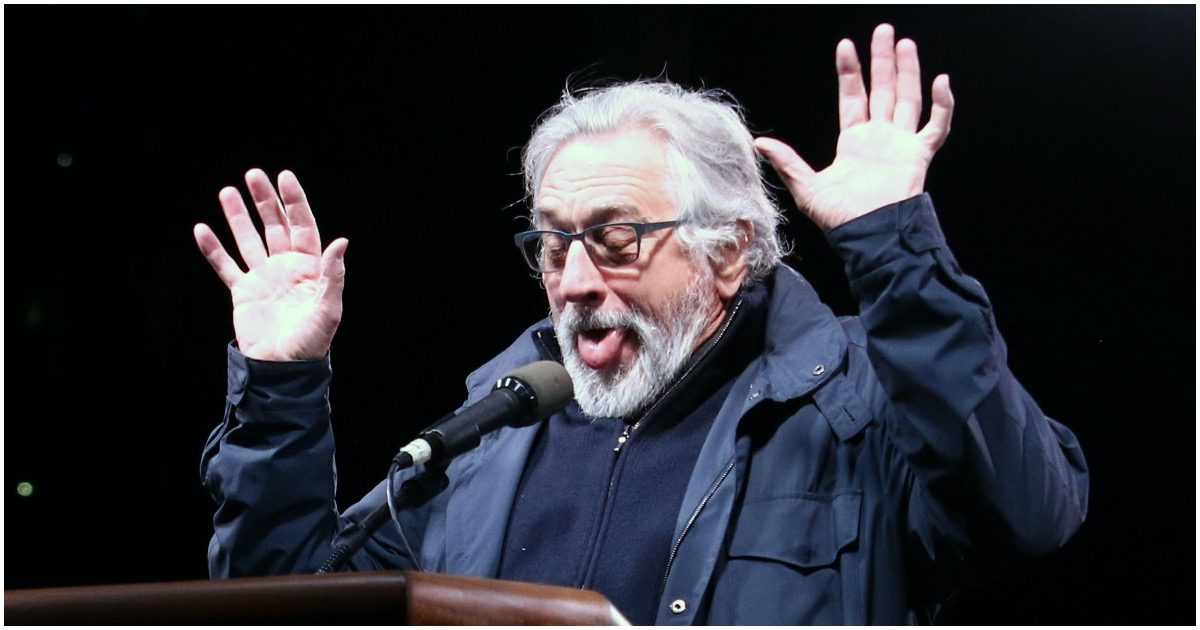 Robert De Niro may be a Hollywood legend but the man seemingly has a burning desire to be remembered as someone on the wrong side of history. As a liberal, of course, Bob will always be protected by the mainstream media and will never be painted in a negative light. But with each passing day, even certain liberals have to wonder if this guy is okay.

His latest comments on President Trump and supporters of POTUS prove that De Niro is entirely off the reservation. And for some reason, he seems to enjoy living there. From Breitbart:

Robert De Niro also lashed out at President Trump’s supporters, stating he has “people who follow him who are crazy and want to do crazy things.”

He said, “Trump has people who follow him who are crazy and want to do crazy things. What we’re doing in film, it’s like a dream. We know it’s not real. There are people who will take anything to be real and that we have no control over.”

He added, “The president is supposed to set an example of trying to do the right thing. Not be a nasty little bitch. Because that’s what he is. He’s a petulant little punk. There’s not one thing that I see in him or his family, not any redeeming qualities. They’re out on the take. It’s like a gangster family.”

It’s one thing to bash Trump as an American in America. That is your right.

But to go overseas and bash the most powerful man in the world is about as disrespectful as it gets. And De Niro couldn’t care less.

The Academy Award-winning actor had no problem ripping 45 a new one, while in the United Kingdom.

Isn’t Bob a “climate change” guy? Was he cool he flying a jet to the UK? Oh, those liberals.

De Niro whined, “Today, everything’s been turned upside-down because of Trump because he’s such a dirty player. It’s amazing to me that’s he’s…getting away with it. He won’t get away with it forever, but he is getting away with saying these things about every institution. We have to defend these institutions, plus the Fourth Estate, the press, because he’s trying to destroy them and for only one reason: to save himself. And we all know this.”

His negative words for Trump on a daily basis prove he’s a long way from the reservation. Dude is off the deep end.

Jill Biden Goes On MSNBC, Says Trump Is ‘Afraid to Run Against My Husband’ In 2020