On Tuesday, Roseanne Barr took to Twitter to share her displeasure with former White House adviser Valerie Jarrett, posting a tweet that was so highly offensive and deemed racist that ABC ended up cancelling the second season of her show.

But that wasn’t all.

Barr’s agency dropped her as a client, her co-stars released statements condemning her behavior, and other networks where the earlier seasons of her show were in syndication have removed it from their programming block.

Later in the evening, Barr came back to Twitter and responded to some of the controversy, but unfortunately, it seems like she might have made things a little bit worse for herself in the end.

Her “joke” about Jarrett being the love child of the Muslim Brotherhood and “Planet of the Apes” set off an uproar denouncing the comedian for allegedly being racist. Barr followed with apologies to Clinton and explained that her Jarrett comments were a joke.

But after the show’s consulting producer, Wanda Sykes, announced she would not be returning to the ABC show’s second season following Barr’s comments, and the backlash continued, ABC announced Tuesday afternoon that it was cancelling the show.

“Roseanne’s Twitter statement is abhorrent, repugnant and inconsistent with our values, and we have decided to cancel her show,” ABC Entertainment president Channing Dungey said in a statement.

After the fallout on Tuesday night, Barr took to Twitter again to explain that she thought Jarrett was Saudi, not black.

i thought she was saudi

@ValerieJarrett i don't know if u saw it, but I wanted2 apologize to u 4 hurting and upsetting u with an insensitive & tasteless tweet. I am truly sorry-my whole life has been about fighting racism. I made a terrible mistake wh caused hundreds of ppl 2 lose their jobs. so sorry!

Roseanne also went on to stat that what she did was “unforgivable” and “indefensible” and asked her fans not to defend her actions. The actress went on to say she had been taking Ambien and seemed to point to that playing some sort of significant factor in her actions. 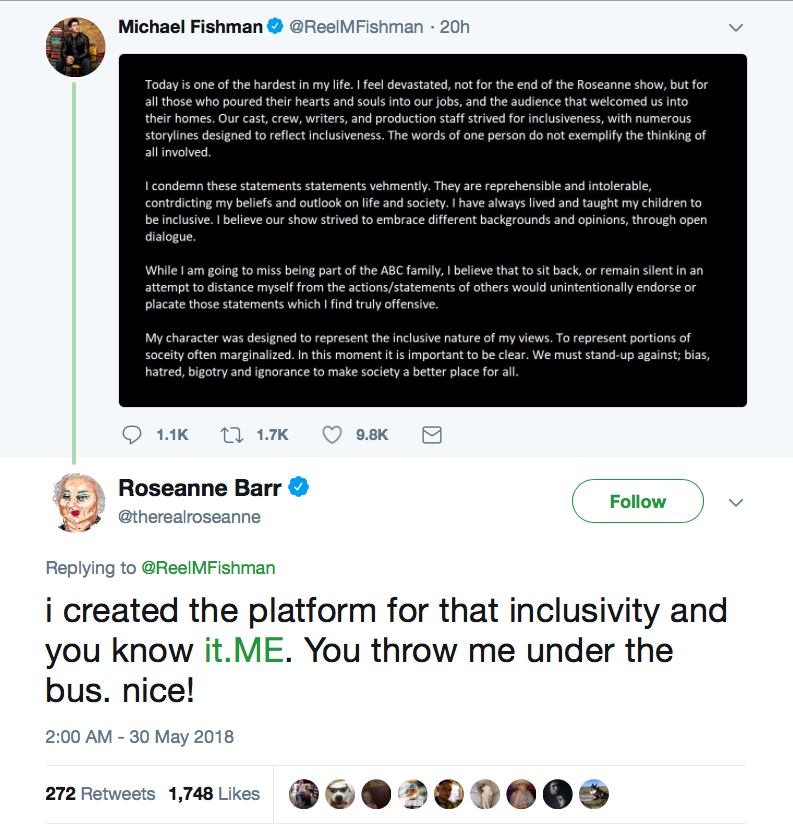 While what Roseanne did is truly indefensible, horrid, and just plain awful, there’s a serious problem with the response given by ABC. The problem isn’t that they cancelled her show, which many agree was the right thing to do.

No, the problem is the inconsistency within ABC’s standards. Plenty of their other programming has folks making fun of white people, yet those shows are still on the air with no issues. HBO didn’t fire Bill Maher for using a racial slur. That hardly seems fair.

It seems that as long as you’re a liberal, you can get away with egregious behavior, simply because you believe the right things. This is unacceptable.

Here are some views from others on Twitter who agree with this sentiment:

People are asking me How can i be black and still support Roseanne after the mistake she made, um the same way y’all still support Bill Maher after he said House Nigger and mocked black slaves, he still has a show and he wasn’t on Ambien . pic.twitter.com/RlI0pAHmgT

Cancel #Roseanne, ok. But what about @JoyVBehar who called Christians mentally ill? Or @KeithOlbermann who slanders @realDonaldTrump everyday by calling him a white supremacist? Or @michelleisawolf who tore into Sarah Sanders based on her physical appearance?e

Maybe if Roseanne had just lied about what she tweeted, blamed non-existent "hackers" and stuck to what was obviously a bogus excuse for weeks, the media would have immediately forgiven her.

thanks for all your kind comments, everyone! Love u all goodnight-

The basic takeaway from all of this is that there is a deep need for consistency in how folks are treated based on the things they say.

ABC, as a private company, has every right to decide what kind of language and speech they want associated with their brand. Roseanne’s comment is not in line with those values and thus she paid the consequences for it.

Remember, free speech is about not having your expression limited by the government. A private company can do whatever it wishes.

Just because you can say what you want doesn’t mean there aren’t consequences.