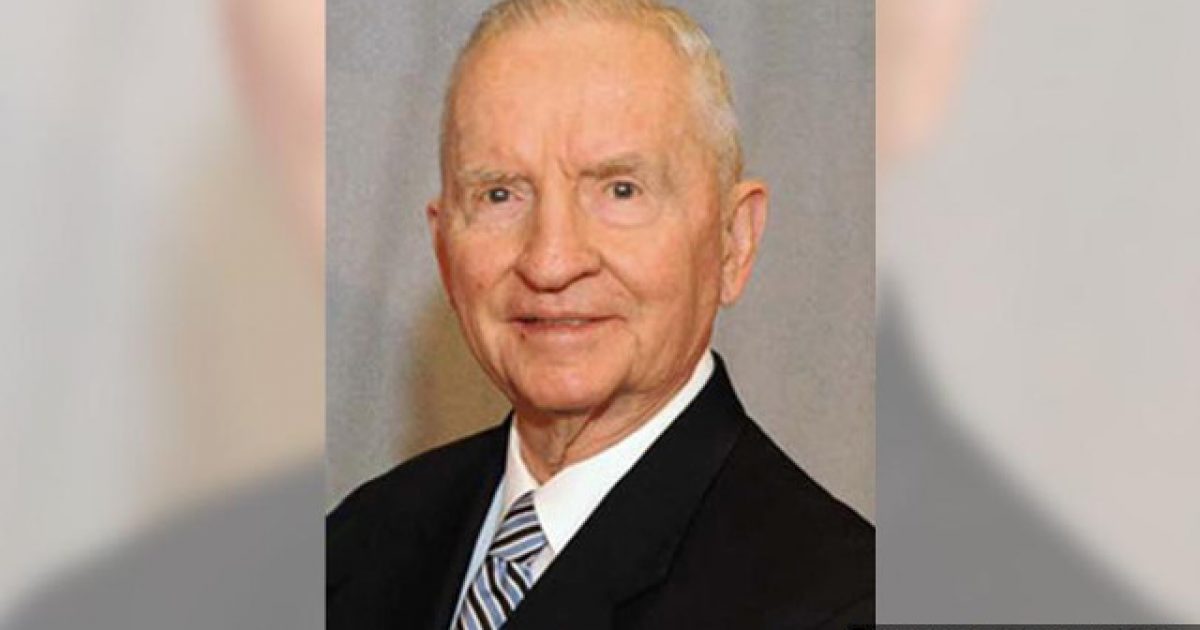 Billionaire Ross Perot passed away from leukemia on Tuesday, but it seems that his one final political act will definitely endear him in the hearts of every Trump supporter across the country.

Apparently, during the height of his battle with this destructive form of cancer in March, Perot wrote out two check for President Trump’s re-election campaign in the legal maximum amount of $2,700.

This, ladies and gentlemen, is what a patriot looks like.

One check will benefit Trump in the primary cycle, while the other will go toward Trump’s general election campaign. Federal election law restricts individual political donations to $5,400 per election year.

Perot, a business magnate who lost his independent campaigns for president in 1992 and 1996, is thought of as Trump’s populist predecessor who paved the road for Trump’s successful campaign in 2016.

Both businessmen employed similar bombastic campaign strategies, including a focus on a nationalistic agenda and leveraging the media to boost their campaigns. The only difference? Perot ran as a third-party candidate, while Trump used the Republican Party to win the White House.

“If Donald Trump is the kind of Jesus of the disenchanted, displaced non-college white voter, then Perot was the John the Baptist of that sort of movement,” Democratic strategist James Carville quipped in 2016, the Globe noted.

Perot didn’t come out in support of Trump in 2016, but then again, he didn’t voice any support for any candidate, so that really doesn’t mean anything. The last candidate to receive his support was Mitt Romney in both 2008 and 2012.

Perot was a man who proved that you didn’t have to be a career politician in order to have a massive impact on the political landscape of the entire country, and also showcased that an independent candidate, using the correct strategies, could indeed beat the two-party system, if the rest of the country was ready for it, that is.

At that time it wasn’t, but it seems that might be changing. We’ll have to wait and see.

There are a number of rotten apples in both the lower and upper chamber. The vast majority of them will vote for Joe Biden in November. Hawaii’s Mazie Hirono is one of the worst. When asked by Senator Ted Cruz to denounce the wildly anti-American group, “Antifa,” Mazie refused. She even took things a step further and walked out of the hearing. Yes, she literally took her ball and walked away so nobody else could play. And that’s what libs do best. From Fox News: Tensions flared at a Senate hearing on Antifa when a top Democrat walked out of the room declaring she couldn’t sit through Sen. Ted Cruz’s rhetorical speeches any longer. The dustup occurred when Cruz, R-Texas, blasted Democrats for not condemning Antifa more directly for the violence and destruction that has taken hold in certain U.S. cities in the wake of George Floyd’s death in Minneapolis. WATCH: https://twitter.com/dcexaminer/status/1290768697838141441?ref_src=twsrc%5Etfw%7Ctwcamp%5Etweetembed%7Ctwterm%5E1290768697838141441%7Ctwgr%5E&ref_url=https%3A%2F%2Fwww.thegatewaypundit.com%2F2020%2F08%2Fantifa-apologist-mazie-hirono-refuses-denounce-antifa-walks-briefing-video%2F Hirono made a vile comment about Trump supporters. And she likely won’t face any push back, whatsoever. VIDEO: https://www.youtube.com/watch?v=LHG_u-p15CQ&feature=emb_title Even when Congressional liberals let it slip that impeaching President Trump is all about preventing him from winning re-election, the media doesn’t care. Is that an issue? Sure. But at the end of the day, the public isn’t stupid. They can see that Dems have cheapened the impeachment process for political gain – and it should come back to bite them sooner rather than later. Check out Hawaii Senator Mazie Hirono (D). She made it clear that there is “tremendous fear” Trump will win in November if he’s not kicked out of office before then. WATCH: https://twitter.com/RNCResearch/status/1221171971569963009?ref_src=twsrc%5Etfw%7Ctwcamp%5Etweetembed%7Ctwterm%5E1221171971569963009&ref_url=https%3A%2F%2Ftwitchy.com%2Fdougp-3137%2F2020%2F01%2F25%2Flet-the-cat-out-of-the-bag-again-sen-mazie-hirono-admits-true-motivation-behind-dem-impeachment-push%2F Reactions: https://twitter.com/kgbman/status/1221176776837103616?ref_src=twsrc%5Etfw%7Ctwcamp%5Etweetembed%7Ctwterm%5E1221176776837103616&ref_url=https%3A%2F%2Ftwitchy.com%2Fdougp-3137%2F2020%2F01%2F25%2Flet-the-cat-out-of-the-bag-again-sen-mazie-hirono-admits-true-motivation-behind-dem-impeachment-push%2F https://twitter.com/LizRNC/status/1221177364794814464?ref_src=twsrc%5Etfw%7Ctwcamp%5Etweetembed%7Ctwterm%5E1221177364794814464&ref_url=https%3A%2F%2Ftwitchy.com%2Fdougp-3137%2F2020%2F01%2F25%2Flet-the-cat-out-of-the-bag-again-sen-mazie-hirono-admits-true-motivation-behind-dem-impeachment-push%2F

The Democrat way: cause massive problems (or refuse to fix them), then demand more and more money to cover the problem like a band-aid – knowing full well how easily it can peel off. New Yorkers, what were you thinking when you put this guy in office? Want a do-over or what? WATCH: https://twitter.com/tomselliott/status/1290763031484473347?ref_src=twsrc%5Etfw%7Ctwcamp%5Etweetembed%7Ctwterm%5E1290763031484473347%7Ctwgr%5E&ref_url=https%3A%2F%2Fwww.thegatewaypundit.com%2F2020%2F08%2Fnyc-mayor-bill-de-blasio-laying-off-22000-city-workers-feds-dont-give-us-bailout-video%2F From ABC 7 New York: NEW YORK CITY (WABC) — New York City Health Commissioner Dr. Oxiris Barbot resigned on Tuesday, expressing her “deep disappointment” with the de Blasio administration’s handling of the COVID-19 crisis. Barbot, in the resignation letter she submitted Tuesday morning, said the Health Department’s expertise was not sufficiently tapped. “I leave my post today with deep disappointment that during the most critical public health crisis in our lifetime, that the Health Department’s incomparable disease control expertise was not used to the degree it could have been.” Do the right thing and resign, Bill. Enough is enough.