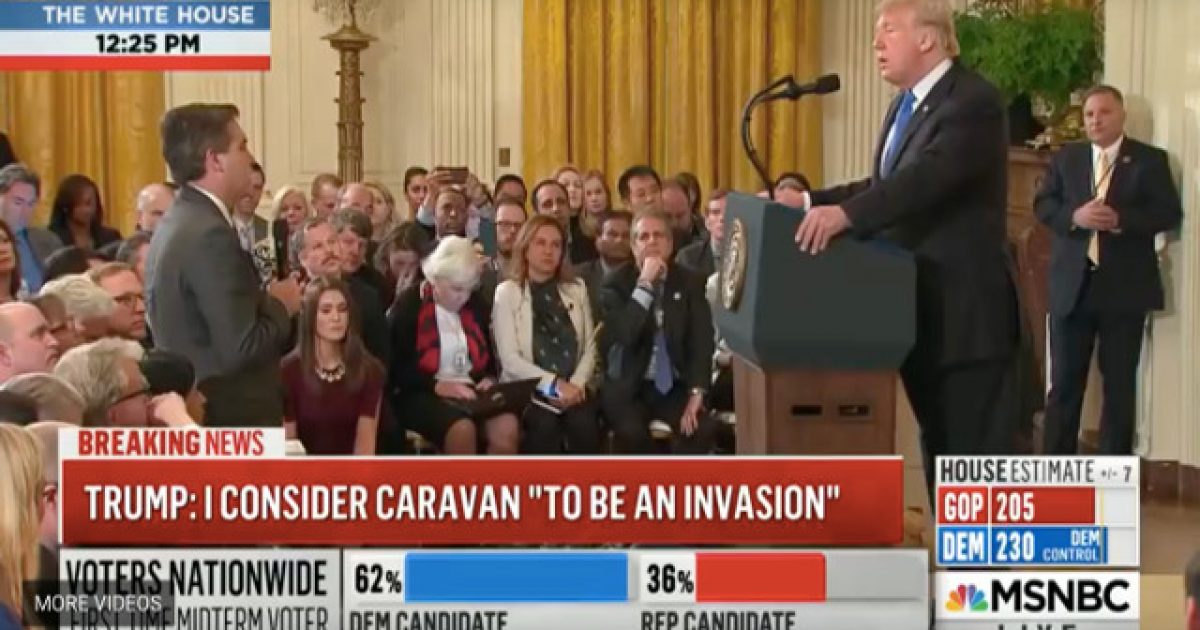 CNN White House correspondent Jim Acosta is not having a very good week. Early on Wednesday he had a confrontation with President Trump that ended with the Commander-in-Chief taking him to the woodshed over his rude and inexcusable behavior, an embarrassing display to say the least.

However, his bad day didn’t end there. In fact, it got even worse. The president revoked his hard pass for being combative, not allowing an aide to take his microphone, and refusing to allow other reporters to ask questions.

The incident actually unfolded during conservative powerhouse Rush Limbaugh’s radio program, which enabled him to give some play-by-play commentary. As you might expect, it’s pretty awesome.

In response, Limbaugh said what was there for “everybody to see” was exactly what’s been happening all along with the media’s treatment of Trump.

“And this is there for everybody to see,” said Limbaugh. “It’s nothing new. It’s the way the press has been dealing with Trump.”

Limbaugh went on to play another clip from yet another combative reporter, American Urban Radio Networks’ April Ryan.

“There was another set of fireworks after Jim Acosta behaved as the childish, rude person he is,” said Rush. “April Ryan of something called the American Urban Radio Networks decided to start asking questions when she had not been given the microphone, when she had not been called on. This is another radical leftist political hack that’s working as a journalist.”

“I’ll give you voter suppression. Take a look at the CNN polls, how inaccurate they were. That’s called voter suppression,” said Trump. But when he gave a reporter a chance to ask a question, Ryan attempted to interrupt repeatedly.

“The point is, that’s April Ryan, and she doesn’t have the microphone,” said Limbaugh. “When it’s a journalist’s turn, they have an aide in there passing a microphone around so everybody can hear the question. She was not given the microphone. She just started shouting questions out, ‘What do you mean voter suppression?’ And Trump’s point about voter suppression is that negative polls — for example, was it a Reuters poll? There was a Reuters poll yesterday that had both Gillum and Bill Nelson up by seven! On Election Day! Well, they end up both losing! But a poll has ’em up plus seven. That’s what Trump is calling voter suppression. When CNN runs all of these crazy polls showing the Democrats running away with everything, that’s voter suppression because it tends to make Republicans think there’s no reason to vote! It’s over, it’s hopeless! ‘Cause people believe this garbage!”

Here’s the full video of the encounter Trump had with Acosta. It’s quite entertaining.

While President Trump doesn’t always deliver the most articulate, clear answers to a lot of important questions, the one thing he does well is put an out of control left-wing media back in its place.

For far too long, liberal mainstream media has been allowed to push conservatives around. With Trump, they know they can’t get away with that, and it’s eating them up.

Perhaps what they ought to do is examine how they approach issues to see if, perhaps, the criticisms against them by Republicans has any real merit. If it does, they should make changes in order to preserve journalistic ethics and integrity.

VIDEO: Michael Knowles’ Reaction to Jeff Sessions Resignation is Right on the Money