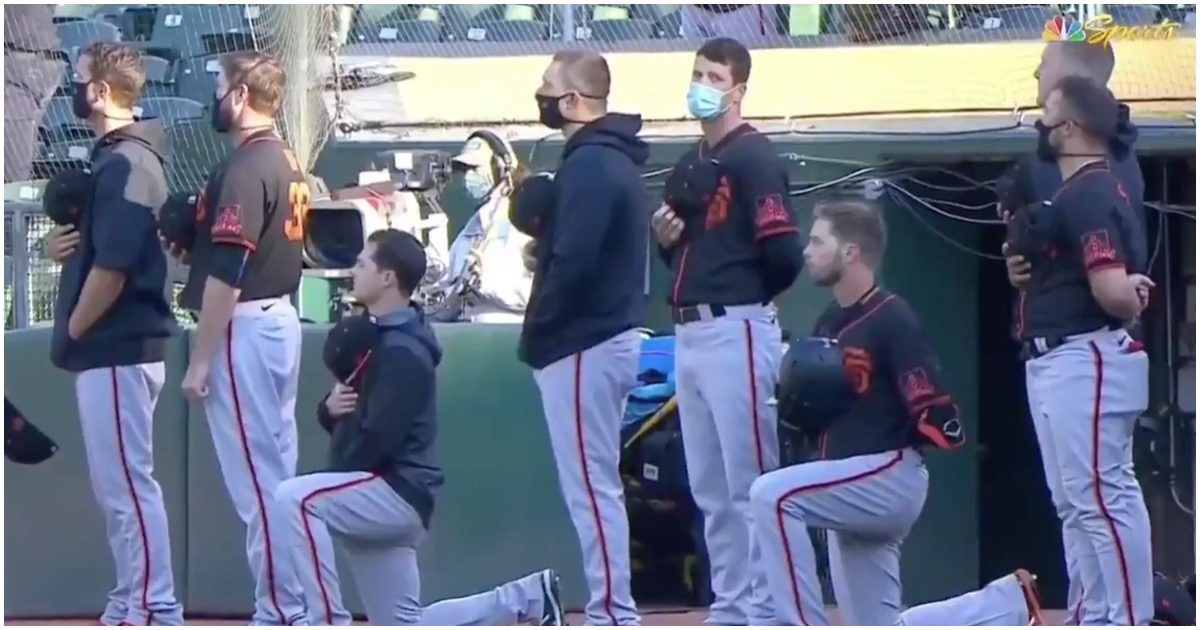 If you’re a Los Angeles Dodgers fan, you didn’t need another reason to hate the San Francisco Giants. And yet, on Monday, they gave you another one – if you’re a proud American.

Manager Gabe Kapler and multiple Giants players decided to kneel for the national anthem before their afternoon game.

Manager Gabe Kapler, first base coach Antoan Richardson and outfielders Jaylin Davis, Mike Yastrzemski and Austin Slater were among the San Francisco Giants who knelt during the playing of the national anthem ahead of Monday’s exhibition game against the Oakland A’s.

Members of the Giants team took a knee on the same Coliseum field where former Oakland A’s catcher Bruce Maxwell became the first MLB player to kneel during the national anthem to protest racial injustice on September 23, 2017.

A bunch of Giants players and coaches kneeled for the anthem. Brandon Crawford put his hands on the shoulders of Jaylin Davis and Antoan Richardson: pic.twitter.com/2XsIg8oFjw

If you thought kneeling during the National Anthem was a problem a year or two ago for the NFL, just wait until the upcoming season kicks off. Taking a knee is going to be the cool thing to do.

A number of players have already stated that they will kneel, including Cleveland Browns quarterback Baker Mayfield.

But what if coaches start kneeling? Wouldn’t that set a poor example for their squads?

Carolina Panthers head coach Matt Rhule said in a video conference with reporters on Thursday that he is considering joining his players and taking a knee.

LeBron James and many other athletes went after NFL legend Drew Brees, all because the star quarterback had the audacity to claim that he doesn’t “agree with anybody disrespecting the flag of the United States of America or our country.”