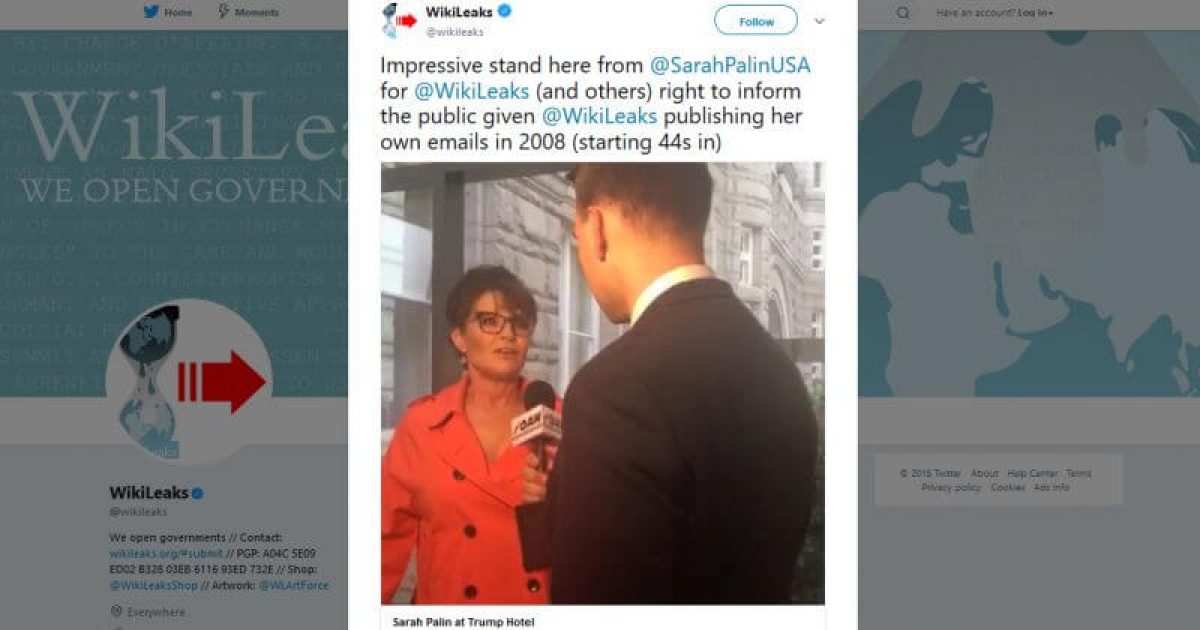 Saying that she had been a “stinker” to Assange when he posted her emails, Sarah Palin said that her feelings changed when she understood him better.

Sarah Palin has been affected directly by Julian Assange’s work, so it is rather amazing that she expressed support for the man when asked about him. Assange has been effectively “disappeared” recently in the Ecuadorian embassy, being cut off from all internet communication. Palin was asked what she thought and she was quite positive about Assange.

Sarah Palin on Thursday expressed her appreciation for WikiLeaks publisher Julian Assange, notwithstanding his website releasing the Republican politician’s personal emails nearly a decade earlier during her failed campaign for vice president.

The former Alaska governor praised Mr. Assange during an interview […], reversing course after harshly condemning WikiLeaks over its past publications.

“We do have a little bit of history,” Mrs. Palin said with respect to the WikiLeaks chief. “He leaked or published somehow my private emails, and I was so ticked off at him and I thought he was just such a foe — until I started figuring out where he was headed.”

Mr. Assange, Mrs. Palin added, “is trying to provide people with information so that we can make better decisions for our own lives, for our communities, for our country [and] for the world.”

“I’ve been able to really appreciate him more,” Mrs. Palin continued. “I appreciate that he’s all about freedom. He wants people to have information. And that’s power. We need that.”

Impressive stand here from @SarahPalinUSA for @WikiLeaks (and others) right to inform the public given @WikiLeaks publishing her own emails in 2008 (starting 44s in) https://t.co/onNSajd31D

Cassandra Fairbanks wrote about the incident at the Gateway Pundit: “AMAZING INTERVIEW: Sarah Palin Goes All In Supporting WikiLeaks and Julian Assange (VIDEO).” She contrasted Palin’s reaction to Assange with Clinton’s reaction.

Posobiec asked Sarah Palin how she felt about Julian Assange being stuck in the Ecuadorian embassy in London with no internet and no communication to the outside world.

Palin, unlike Hillary Clinton, holds no ill will towards the publisher. She told Posobiec that Assange simply wants people to have information and that information is power. “We need that,” she said.

Is there more to the denuclearization of North Korea story than meets the eye?