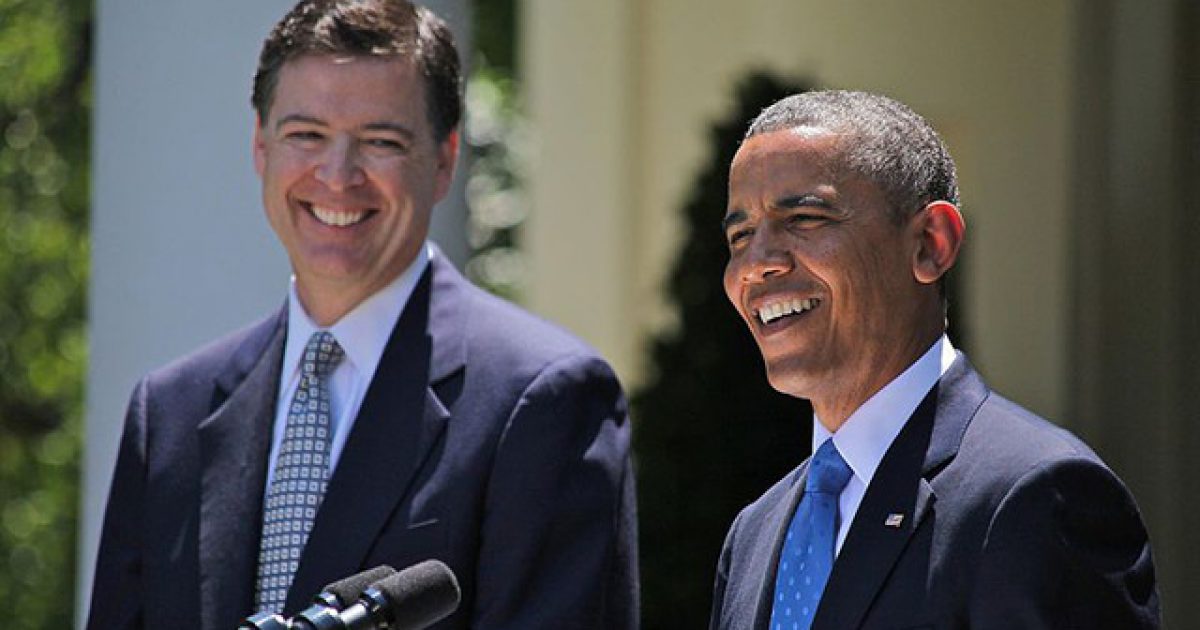 It seems the controversy surrounding the FBI and their investigation into the use of a private email server by Hillary Clinton just keeps getting deeper and deeper. This is thanks in large part to a new report from the Department of Justice Inspector General.

All kinds of bombshells have come out in this report, including the fact that Comey himself conducted FBI business using a private email account. However, it seems we’re still at the beginning of the revelations to surface from the report.

Now it seems, Comey scrubbed Obama’s name from his report on Hillary. Things are not looking good for this guy right about now.

Thanks for a Friday night news dump last September, we knew that Secretary of State Hillary Clinton was emailing back-and-forth with President Obama using her private email address routed through her homebrew server. Don’t worry about national security, though: Obama used a pseudonym that not even Huma Abedin knew, so it was all very secure.

That fact came up Thursday with the release of the OIG report, but with a new twist: according to the report, Clinton “used her private email extensively while outside the United States, including from the territory of sophisticated adversaries,” but the fact that she was corresponding with the president was scrubbed from James Comey’s exoneration. Instead, references to Obama were changed to “another senior government official” … and then even that bit was dropped from the final draft.

2. Scrubbing the reference to Obama was an enormously consequential change. pic.twitter.com/n56lQhgaVQ

Obama repeatedly said he first learned about its existence from the news. https://t.co/I6SlDEFrd0 https://t.co/JpoPP4uI3C

Isn't the fact that Obama knew and may have had his own private address within that server the motivation behind protecting her and thus him from investigation? https://t.co/sRFkhFQids

Hillary was the opposite of reckless. This is the coverup. She knew exactly what she was doing by setting up the server and bleach-bitting it. She was hiding things she knew were there. https://t.co/dWHLroMVBY

"while in the territory of a foreign adversary" https://t.co/ohR6Ex0Fzy

A lot of the focus will obviously be Clinton/Trump but the Clinton/Obama stuff in the IG report is absolutely bananas. Always good to have friends in high places. https://t.co/jBg1KTjllo

Hillary was the opposite of reckless. This is the coverup. She knew exactly what she was doing by setting up the server and bleach-bitting it. She was hiding things she knew were there. https://t.co/dWHLroMVBY

And the media still expects us to believe Obama was a “scandal free” president with a straight face? Yeah, don’t think that’s going to happen.

The former president was corrupt well before this information was discovered, having allowed the IRS to target people based on their political beliefs and doing next to nothing to fix the VA, allowing many of our nation’s bravest soldiers to die from lack of care.

Who knows what else we’re going to find out about Comey and the FBI in the coming days and weeks?

Paul Ryan’s DACA Deal is a Terrible Idea, Here’s The Reason Why