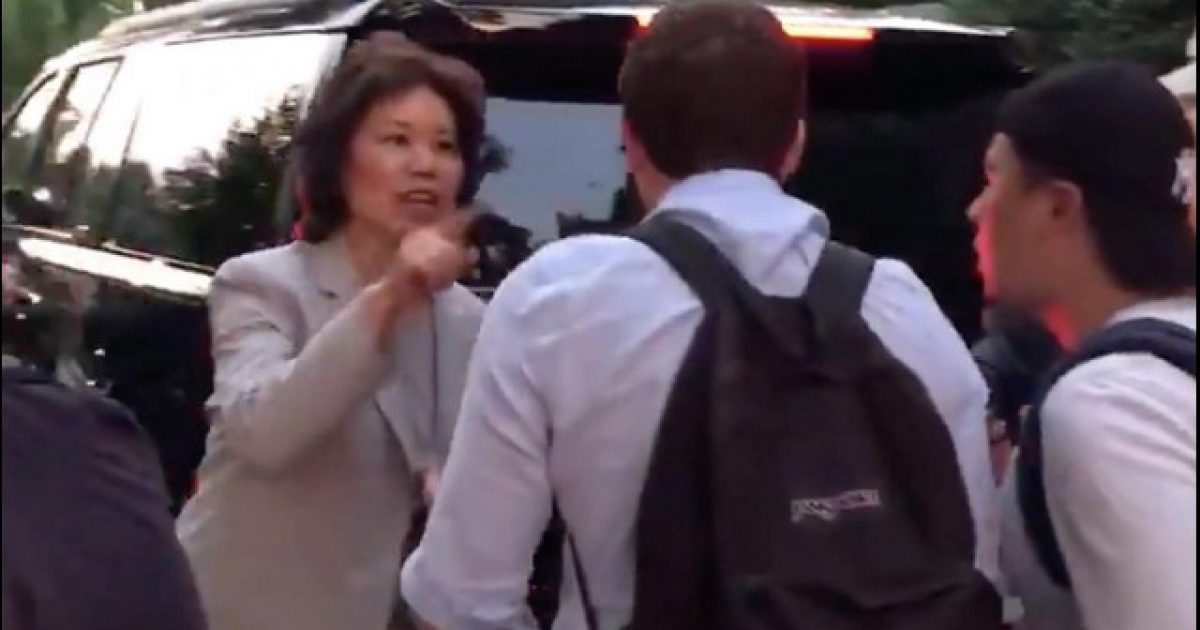 Elaine Chao, Secretary of Transportation, along with her husband Sen. Majority Leader Mitch McConnell were being harassed by a group of liberal protesters who have opted to forego actual airing of grievances and instead toss around hateful rhetoric to try shaming people into following their agenda.

Unfortunately for the protesters, Chao was having none of it and her epic rebuke to these folks has made her a star on social media.

One of the protesters, who only identified himself as “Roberto,” posted video and an explanation of why he was protesting Chao and McConnell.

“We confronted [Senator McConnell] and [Secretary Chao] with @ProPublica audio of children separated from their families at the border while leaving a @Georgetown event,” he tweeted. “We must #AbolishICE & #AbolishCBP!”

“I am Roberto, a rising Senior at Georgetown University,” he continued. “After coming back from my internship at United We Dream, my friend texted me that both Senator Mitch McConnell and Trump cabinet member Elaine L. Chao were present on campus.”

“My parents are Mexican immigrants,” he added, “and I was infuriated that a man who blocked the Dream Act and a Trump cabinet official were invited to my campus. As a result, my friends quickly mobilized and went to the event that was held inside Copley Formal.”

He added, “why they won’t leave our families, friends and communities alone?”

But, as the video shows, Chao did not back down from the protesters and began yelling back at them.

We confronted @SenateMajLdr and @SecElaineChao with @ProPublica audio of children separated from their families at the border while leaving a @Georgetown event. We must #AbolishICE & #AbolishCBP! #FreedomforImmigrants pic.twitter.com/ljv70F3F0L

A group of protesters confronts Mitch McConnell and Elaine Chao with @ProPublica’s audio of children separated from their families at the border while leaving a @Georgetown event. pic.twitter.com/jRKHKBeFpC

There’s a right way and a wrong way to stand up for a cause you believe in. The way these young men behaved here was uncalled for and definitely does not fall under the correct way of drawing attention to an important issue.

They should be organizing legal, peaceful rallies in public places where such activity is allowed if they want to present their concerns. Being civil, polite, and respectful is the only true way to win hearts and minds.

This is something these young bucks need to learn. Fast.

VIDEO: Dan Rather Tries to Smash on Trump, It Totally Backfires on Him