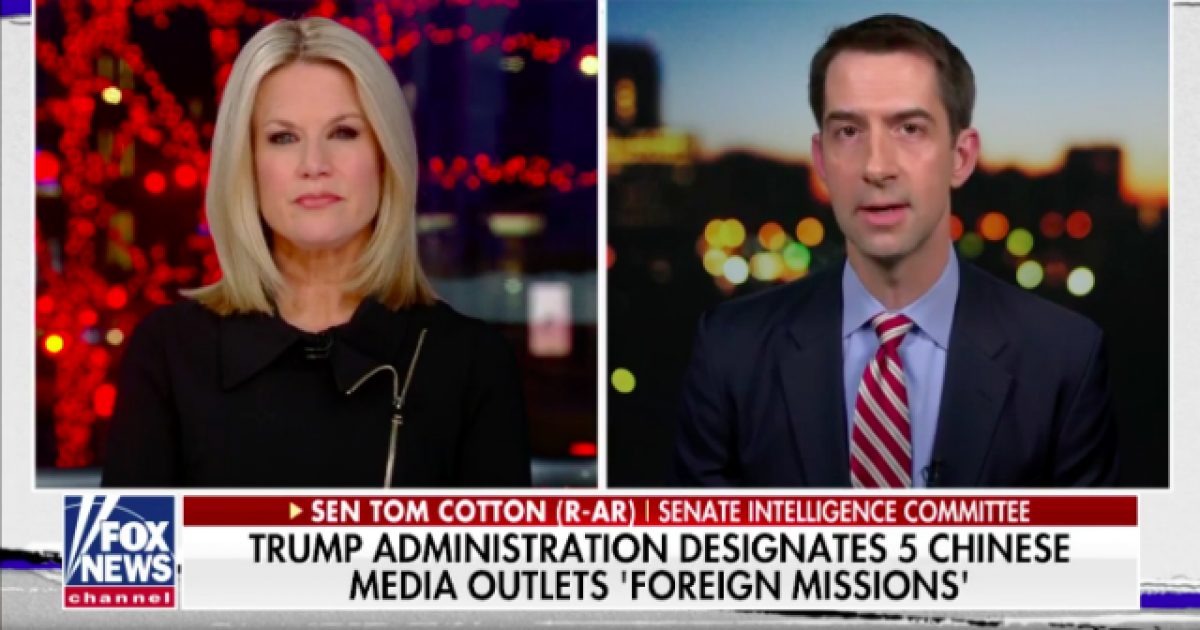 The whole world is freaked out right now about the lethal coronavirus ravaging China, and for good reason, as the virus has killed over 1,600 people in a rather short amount of time.

Folks have been wondering where in the world this virus might have come from, with some individuals theorizing it might have been some sort of biological weapon created in a lab that was either released on purposed in Wuhan as a test of its effectiveness, or leaked out by accident.

Sen. Tom Cotton is one such individual who thinks the coronavirus being a bioweapon is totally plausible and something we need to be open to considering.

Here’s more on that from Fox News:

Sen. Tom Cotton, R-Ark. stood by his earlier suggestion that the deadly coronavirus may have originated in a high-security biochemical lab in Wuhan, China, telling “The Story” Tuesday that we “need to be open to all possibilities” in exploring the origins of the outbreak that has sickened more than 75,000 people around the world.

When host Martha MacCallum pressed the Senator on his startling and unverified claim, Cotton cited a study published by Chinese scientists in The Lancet, which he called a “respected international science journal.”

“I’m suggesting we need to be open to all possibilities and we need to demand that China open up and be transparent so a team of international experts can figure out exactly where this virus originated,” Cotton said.

“We know it didn’t originate in the Wuhan food market based on the study of Chinese scientists … I’m not saying where it started, I don’t know. We don’t know because the Chinese Communist Party (CCP) won’t open up to international experts,” Cotton said. “That’s what we need to do so they can get to the bottom of where the virus originated and hopefully can effect a diagnostic test and vaccine for it.”

When I said we couldn't rule out any explanation yet for the Wuhan coronavirus' origin, @washingtonpost claimed I was repeating "conspiracy theories" that experts had "debunked."

Cotton isn’t trying to be an alarmist here or anything like that. He’s simply stating that we all need to remain open to the possibility that this virus is a bioweapon until we have proof that it isn’t. He’s not saying for sure it is, just stating it is one of many different possibilities.

And that is absolutely true at this point. We have no idea where the virus originated or anything, and that leaves a whole lot of mystery surrounding this sickness that we may not be able to get answers about for some time.

Until then, nations of the world need to continue taking precautions to keep this virus from spreading to other nations and decimating their population.