*NEW* BREAKING: It’s Time To FIGHT BACK After What We Just Found What The IRS DELETED From It’s Website- We Are Under ATTACK!
America's Freedom Fighters

*NEW* BREAKING: Marjorie Taylor Greene Just Filed ARTICLES OF IMPEACHMENT Against… THIS IS GOING TO BE BIG!!!!
America's Freedom Fighters 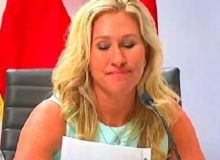 A sheriff in Kings Mountain, N.C, is making it clear what houses he has busted for illegal drug operations.

According to WHNS-TV, the Cleveland County Sheriff’s Office placed a yard sign in front of a house it had reportedly busted for drugs.

“This drug house closed for business by: Sheriff Alan Norman,” the sign read.

“The drug house at 1142 Rollingbrook Ct. in Kings Mountain is officially shut down,” the post said. “Customers are no longer welcome!”

The department also had a message for anyone who was upset by the sign.

“Any unhappy customers or citizens with information about other drug houses should call 704-484-4831.”

This response is perfect for two reasons. First of all, people who were buying drugs from the house would not be able to call and complain to the sheriff’s office without exposing their own crimes.

Second, if a citizen was not buying drugs but simply felt offended by the sign, their complaints would likely be ignored even if they were to call.

With this message, the department let the whole community know it will continue to do its job and bust criminals, and it does not plan on apologizing for it.

The practice of putting up signs at drug houses seems to have originated in Florida. Images shared on Twitter over the last few years showed similar “closed for business” signs outside houses in multiple Florida counties.

“North Port Police Department is now using signs that say “THIS DRUG HOUSE CLOSED FOR BUSINESS” after they make drug arrests.The first sign was placed on Tuesday on Waltrip Street.”

Hahaha this is like a real life darknet market takedown notice 🤣https://t.co/VIaLbi0Uwd pic.twitter.com/uVxvz1iWjY

Sticking it to suspected drug dealers: the St. Lucie County Sheriff’s Office is using a unique way to put folks who are up to no good on notice. Signs that read “This drug house; Closed for Business” were recently placed at homes while being raided for drugs @CBS12 #TreasureCoast pic.twitter.com/CgL90JkiN4

The drug bust in Kings Mountain comes at a time when the fentanyl crisis continues to ravage the country.

According to a February 2022 report from Route Fifty, North Carolina was in the top ten states for fentanyl deaths last year. Overall, 30 states have seen fentanyl deaths double in the last two years.

As police in Democrat-led areas continue to be soft on crime, it is refreshing to see a sheriff send a clear message that crime will not be tolerated. The fentanyl crisis is a major issue in the United States, and it will take decisive action like this to address the problem.

The last time such an explosion occurred in the town was in 2017, when a gas explosion destroyed a home in the city, killing 2 and wounding 3
By Andrew Jose, The Western Journal  August 14, 2022 Comment MoreShare

The Biden family vacation at a South Carolina mansion will not cost them a thing, according to a new report.
By Jack Davis, The Western Journal  August 14, 2022 Comment MoreShare

The revelation could further undermine national trust in the agency.

Trump Calls for the 'Immediate' Release of Mar-a-Lago Documents: 'The World Is Watching'

The ‘domestic terror’ schtick is back.

This is perhaps the most literal manifestation of the national political morass in some time.

Trump Reaches Out to Merrick Garland: 'The Country is on Fire'

It is unclear whether or not this message reached Garland prior to being made public, but the sentiment remains the same:  This is Trump’s nation, and the DOJ is merely living in it.

The actor/producer’s suggestion that he never pulled the trigger has proven to be false.

POKING THE DRAGON: US Lawmakers Make Unannounced Visit to Taiwan

Could this push the world ever closer to the brink of WWIII?

The dune that killed Sean might be an artificially formed one, Indian Riverkeeper Jim Moir told Treasure Coast Newspapers.
By Andrew Jose, The Western Journal  August 14, 2022 Comment MoreShare
Next