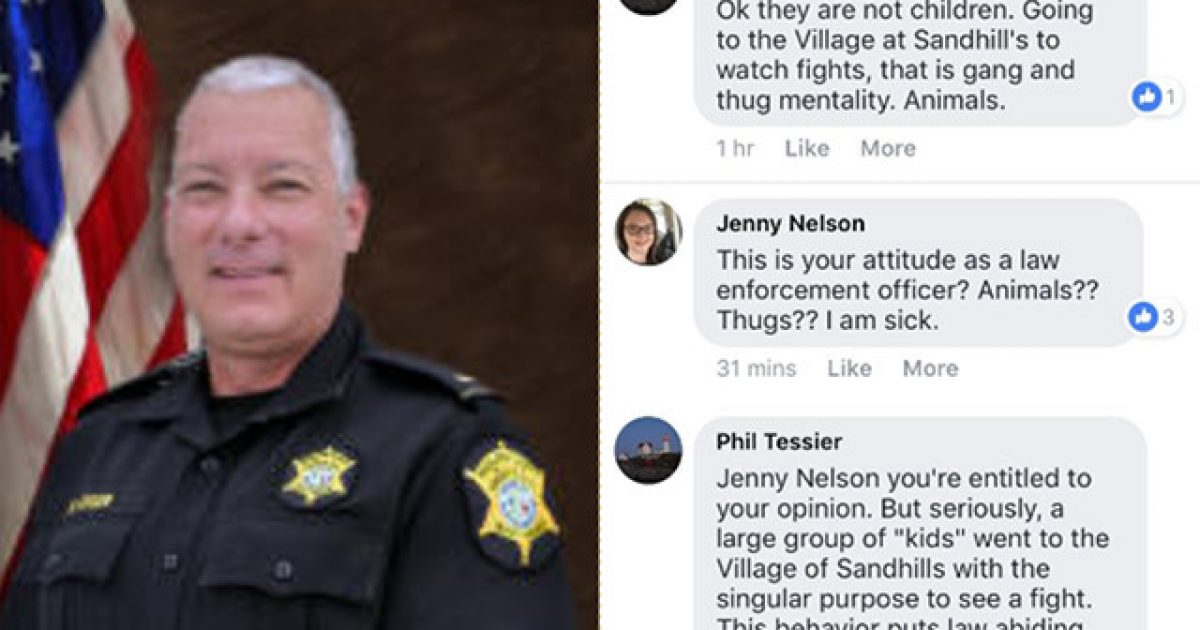 Richland County sheriff’s deputy Lt. Phil Tessier is in a whole lot of hot water after making some controversial statements on social media about teens involved in specific criminal incidents, referring to them as “animals” and “thugs.”

The comment seems fairly similar to one made by President Trump a few weeks ago concerning the MS-13 gang, which is one of the most violent crime organizations in the world. The president referred to them as “animals” and the left immediately twisted this into something racist.

The comments were made on a Facebook post recalling an incident from Saturday night at the Village at Sandhills where a large crowd of teens was fighting in the area. The incident’s aftermath was shown on the popular A&E show LIVE PD and originally investigated as a shots fired call. Despite the investigation, no one was found injured and no gun was ever recovered.

The context of the post written by Richland 2 School District board member Monica Elkins – which has a number of shares and likes – and speaks on the sadness of the incident and how the community could come together to stop them.

The comments attributed to Lt. Tessier have since been removed or deleted but not before screenshots were taken and shared on social media.

The comments, allegedly made by Lt. Tessier, say: “Ok they are not children. Going to the Village at Sandhills to watch fights, that is gang and thug mentality. Animals.”

Commentor Jenny Nelson responded: “This is your attitude as a law enforcement officer? Animals?? Thugs?? I am sick.”

In response, Tessier defended his comment saying their behavior puts other citizens lives at risk and told Nelson she was “entitled to your opinion.”

A spokesperson for the sheriff’s department spoke with the media and confirmed Tessier was the one who made the comments and that he was being put under disciplinary measures for his “stupid and inappropriate” comments.

Have we really become so sensitive  that when a man speaks his mind, tells the truth, and even uses restraint — many other folks would’ve called the kids much worse — in describing wickedness, it has become “stupid and inappropriate?”

It’s understandable the department wants to maintain a healthy relationship with the community and thus expect their officers to be above reproach in the public eye, but this seems just a tad bit excessive.

Sad times when you can’t freely speak your mind.

Jim Carrey Unveils New Painting of First Lady, Doesn’t Get The Response He Hoped For