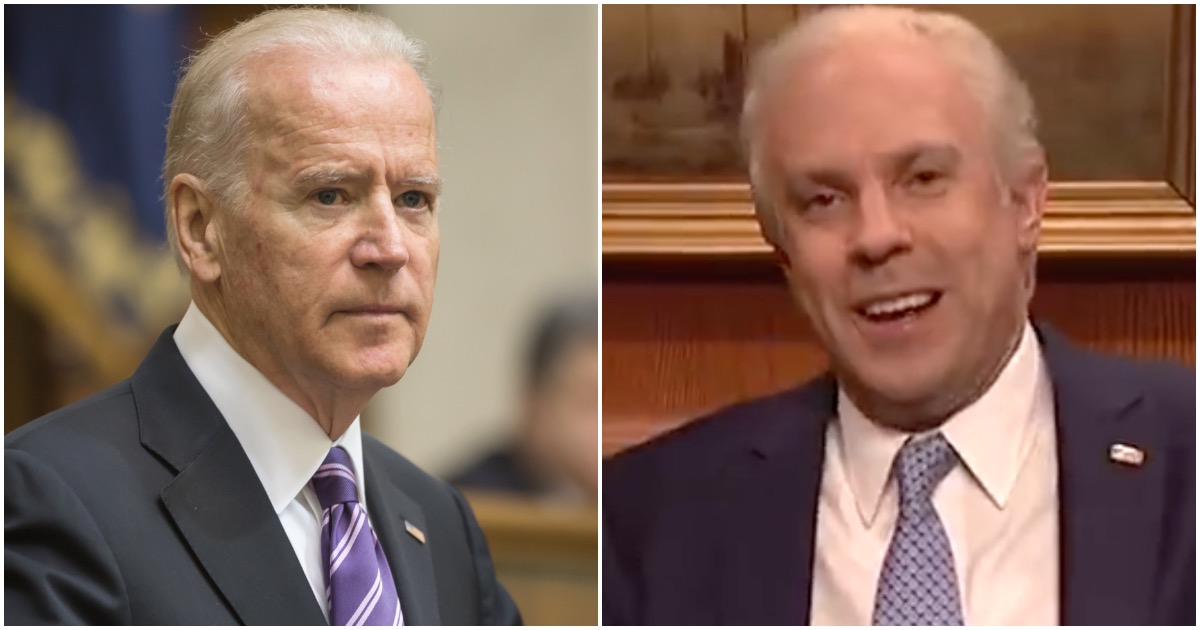 Trending: WATCH: Schiff Admits Trump’s Impeachment Is About Stopping Him From Winning Re-Election

After being told that his contact with women can be considered inappropriate, Biden defends himself:

You guys know that I’m a tactile politician, right? Okay? I’m a hugger, I’m a kisser, I’m a little bit of a sniffer, okay? But the last thing I ever want to do is offend anyone.

The problem for Lorne Michaels and SNL is they know it will be hard to book guest hosts, most of whom are liberal, if they attempt too many conservative-pleasing skits.

One way or another, it’s all about politics.

Again…every now and then; once in every other blue moon.

SNL also did a skit on the college admissions scandal, but it was cut for time.

If Joe Biden was any other candidate running for president in 2020, he’d be forced to bow out.

Of course, Joe was Barack Obama’s right-hand man and is therefore given a pass by the far-left mainstream media.

He can do no wrong.

Although Biden has yet to declare for 2020, he’ll have plenty to answer for if/when he does.

The New York Times reports that “Caitlyn Caruso, a former college student and sexual assault survivor, said Mr. Biden rested his hand on her thigh — even as she squirmed in her seat to show her discomfort — and hugged her ‘just a little bit too long’ at an event on sexual assault at the University of Nevada at Las Vegas.”

Caruso, who was 19 years old during the alleged incident, is now 22 and said that she thought that the alleged incident “was particularly uncomfortable because she had just shared her own story of sexual assault and had expected Mr. Biden — an architect of the 1994 Violence Against Women Act — to understand the importance of physical boundaries.”

Lord Help Us! Atheism Has Now Become the LARGEST ‘Religion’ In the United States [Details]

Sen. Elizabeth Warren has fallen behind both Joe Biden and Bernie Sanders in the polls, which is not a great sign this close to the Iowa caucuses, but at the end of the day, it’s still anyone’s game. With the primary so close, many in the Democratic Party have turned on each other and gone after one another in verbal jousting and mudslinging attacks, chief among them Warren and Sanders, with Warren accusing Sanders of saying he didn’t believe a woman could be president. While the smoke is just starting to clear on that a bit, the feud between Bernie and former Democratic presidential nominee Hillary Clinton is still alive, and Warren is refusing to get involved in the fray. Check out the details from The Washington Examiner: Elizabeth Warren tried to skirt questions about Hillary Clinton’s claim “nobody likes” her rival for the 2020 Democratic presidential nomination, Bernie Sanders. “I’m not going there,” the Massachusetts senator, 70, told CBS Friday morning. Clinton, 72, in an interview published this week by the Hollywood Reporter, blasted the Vermont senator, her former 2016 Democratic primary opponent, as “a career politician,” saying she felt “so bad” that “people got sucked into” him. “He was in Congress for years. He had one senator support him. Nobody likes him, nobody wants to work with him, he got nothing done,” the former secretary of state told the outlet. “Bernie and I have worked together for a very long time, and we continue to do so. I’ve said all I’m going to say about this,” Warren said before turning to the topic of impeachment. Warren has obviously realized that her attacks against Bernie backfired on her in a big way so now she’s trying to avoid getting pulled into another battle that could potentially hurt her chances…

Liberals all across the country displayed their true colors by coming out in support of a radical Islamic terrorist, one who killed an untold number of American soldiers and horribly oppressed his own people in Iran after President Trump ordered the drone strike that killed Gen. Qassem Soleimani. These folks despise the president so much that they took the side of a terrorist, strangely seeming to believe that their opinions on this would reflect the feelings of most Americans. A new poll proves that is totally not the case at all. In fact, a plurality of Americans support the president’s decision to take out Soleimani. Here’s more on the poll from The Washington Examiner: The Associated Press-NORC Center for Public Affairs Research poll released Friday found 41% of Americans approved of Trump authorizing Soleimani’s death while 30% of Americans opposed the authorization. While more Americans supported the killing than opposed it, 59% of Americans disapproved of Trump’s handling of foreign policy overall. The poll comes three weeks after the United States killed the Iranian terrorist leader. The strike came in response to Iranian-backed militias attacking the U.S. Embassy in Iraq. Trump described the killing as a “no bullshit” mission. Iran responded by firing over a dozen missiles at bases housing U.S. troops. The Iranian strikes injured 11 Americans but resulted in no deaths. Once again, this poll demonstrates that a lot of individuals in the Democratic Party are on the wrong side of an issue, led there by their own desire to see President Trump impeached and removed from office. In short, they have become so used to hating the president and attacking him over every move he makes that it has become their default reaction, even when he does something good, to criticize him and oppose him. Will this…

Sen. Elizabeth Warren has fallen behind both Joe Biden and Bernie Sanders in the polls, which is not a great...

Liberals all across the country displayed their true colors by coming out in support of a radical Islamic terrorist, one...

Remember not so long ago when Sen. Kamala Harris went off on former Vice President Joe Biden for something race...

Americans might have a thing or two to say about that...

Many Dems will love or hate this, it's hard to tell...