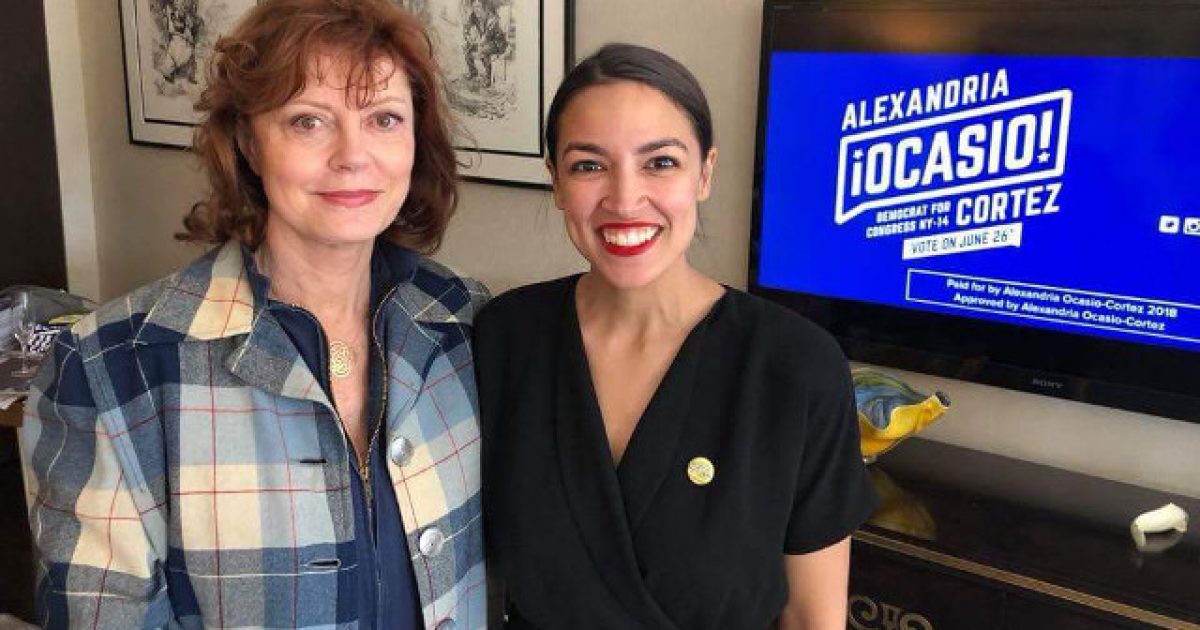 Alexandrai Ocasio Cortez, a 28-year-old socialist who has more or less become a media sweetheart in the last few weeks, has learned that fame and recognition often comes with an ugly side, especially when you don’t tow the line of what is expected of you from the political party you belong to.

Ocasio-Cortez recently snapped a photograph with legendary actress Susan Sarandon and posted it online, which you might think was an innocent gesture, but apparently to folks in the Democratic Party who remain loyal to Hillary Clinton, this was a total deal breaker.

Sarandon, a Bernie Sanders supporter in 2016, offended supporters of Hillary Clinton in March 2016. In a conversation with MSNBC’s Chris Hayes, she said she might not vote for Hillary if she won the presidential nomination, stating, “I think Bernie would probably encourage people [to vote Clinton], because he doesn’t have a lot of ego in this. But I think a lot of people are, ‘Sorry, I just can’t bring myself to do that,’” adding, “I don’t know. I’m going to see what happens.”

Then, in June 2016, appearing on The Young Turks, Sarandon made the statement for which Hillary supporters still condemn her, asserting that Hillary was more dangerous than GOP candidate Donald Trump. She said, “I believe in a way she is more dangerous. They’re both talking to Henry Kissinger, apparently. … She did not learn from Iraq, and she is an interventionist, and she has done horrible things — and very callously. I don’t know if she is overcompensating or what her trip is. That scares me. I think we’ll be in Iran in two seconds.”

Sarandon continued by saying voters were being “fed” a message that Trump was “so dangerous” over his stance on illegal immigration, adding, “I don’t know what his policy is. I do know what her policies are, I do know who she is taking money from. I do know that she is not transparent, and I do know that nobody calls her on it.”

It seems that like elephants, Hillary supporters never forget:

Ok young lady when you cozy to this one. You've lost me. You have to be careful of the company your keep.

“Fear of Donald Trump is not enough for me to support Clinton, with her record of corruption.” — Susan Sarandon

That was my concern about her…..she's a Bernie Bro. But to flaunt it? I'm done.

I think, as more people realize what/who she is, she'll become a footnote. That photo with Dear Sue offends the hell out of me.

Good luck with Doug Jones. I really like him. Anything we can do to help from Mississippi, give us a holler.

Well, at least she stopped pretending and showed us who she really is….like sarandon did in 2016. FOH.

I worked really hard to be fair and give her a chance. She's probably better than the repub candidate…i assume….but i will not give one penny or postcard or any effort for her. Fk susan and her minions.

As you can see, the left is a fickle beast that will devour its own without so much as a second thought for the slightest “infraction” against their core tenet beliefs, which must include a loyalty pledge to Hillary Clinton or something.

It’s always delightful to see the left attack their own, knowing that all that unity they claim to have in their ranks is nothing but fluff.