It’s an image that’s seared into your brain if you’re of a certain age.

Yet, on a certain date, a certain search engine couldn’t even come up with it.

He’s not known by name, but again, the very words should conjure up the image: Tank Man. On June 5, 1989 — 32 years ago — he became the face of the Tiananmen Square massacre without ever showing his face.

Yet, on June 4, the anniversary of the student-led Beijing protests, there was a mysterious glitch on Microsoft search engine Bing which made that image impossible to search for.

If that sounds convenient, consider the reason Microsoft gave: human error. On June 5. How convenient.

If you searched for “tank man” on Bing’s image search, here’s what you came up with:

The same thing with the smaller DuckDuckGo search engine, according to our intrepid reporter: 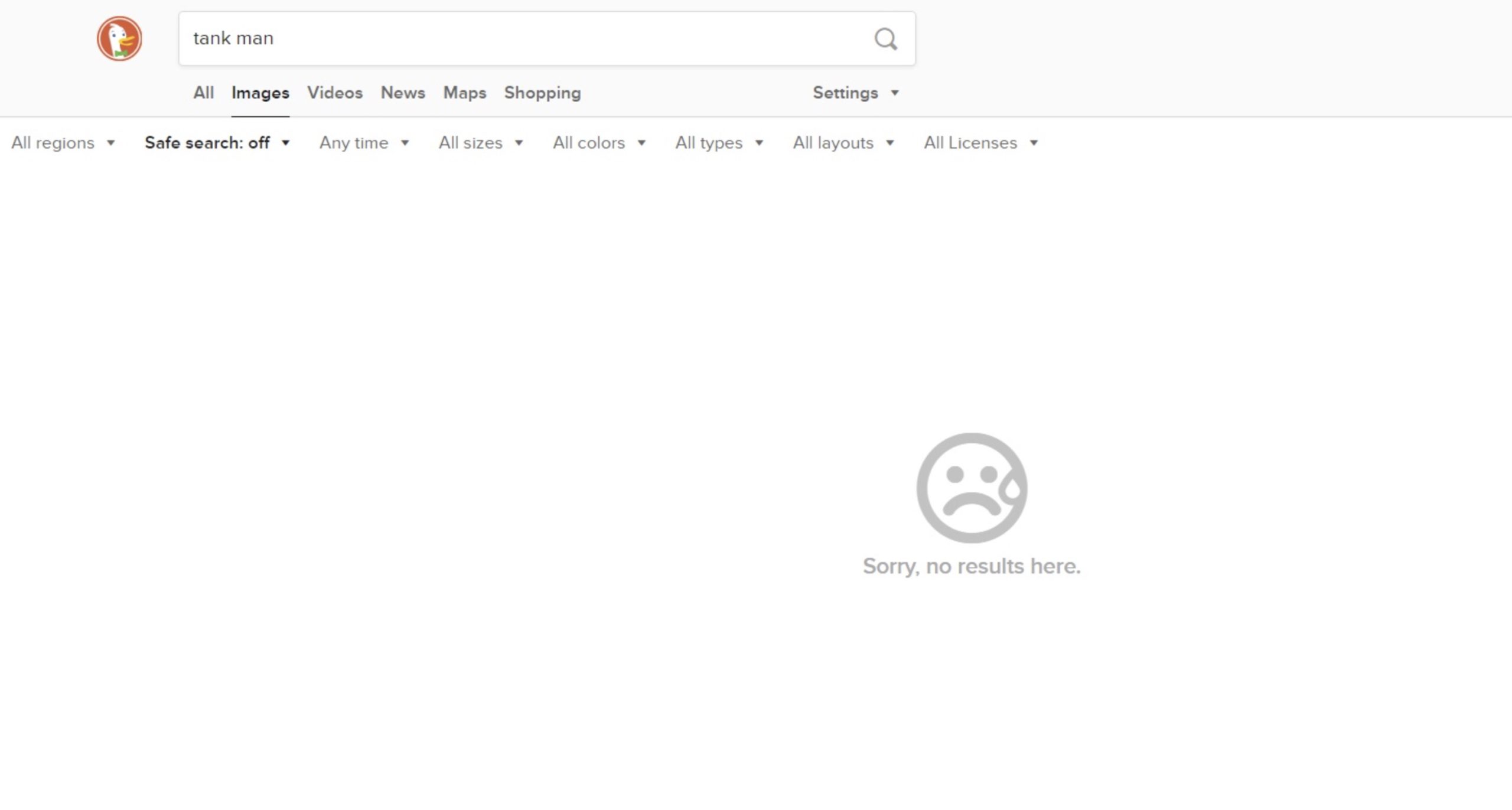 According to the BBC, sources say the Tiananmen square death toll “was 10,000.”

Where did Tank Man go? Don’t worry, Microsoft said, there was a prosaic explanation for the error, which appeared even in the United States on Friday.

“This is due to an accidental human error and we are actively working to resolve this,” the software giant told The Verge.

“It’s an unfortunately timed accident given that June 4th, 2021 is the 32nd anniversary of the student-led protests in China — an uprising in response to changes in the country that was met with assault rifles, tanks, and a massacre,” The Verge’s Ian Carlos Campbell noted.

“Microsoft did eventually restore results to the specific search, though it’s still noticeably missing the well-known image. Adding in a mention of ‘Tiananmen’ or ‘Tiananmen Square’ pulls up what you’d expect, however. It’s not clear why Bing would weigh generic images of tanks more heavily than a famous piece of visual history, but we’ve reached out to Microsoft see if that’s normal.”

On the left is “Tank Man” searches on Bing, available in China. On the right, Google, which has made various attempts to enter the market but remains unavailable there:

MS say they have fixed the problem, so here’s a search for Tank Man on Bing and Google.

Can’t think of a better way to overcome China’s state-induced collective amnesia on the Tiananmen massacre than to make #TiananmenSquare trend on Twitter today, on its 32nd anniversary.

Tank Man’s futile defiance endures as symbolic of the yearning of the human soul to be free. pic.twitter.com/TwWCywKrrB

As Chinese-born human rights activist Yang Jianli, who was an activist in the Tiananmen Square protests wrote in a June 5 Op-Ed, this isn’t just a matter of small import.

“As survivors, we commemorate the Tiananmen Square Massacre not only as a memorial for the victims, but, more importantly, as recognition of the continued struggle. In the face of the world’s most powerful dictatorship, fighting for freedom and justice is like the Tank Man standing in front of a convoy of tanks — it takes unparalleled courage and sacrifice,” he wrote.

“The photograph of the Tank Man risking his life in protest against the repressive Chinese government is one of the most iconic images of the 20th century. For 32 years, people have wondered what became of him, but his identity and his fate remain a mystery.

“The Chinese government has made every effort to suppress the truth about what happened at Tiananmen. To this day, people in China who dare to ask questions about the massacre face brutal persecution.”

As do companies. As The Verge noted, “Google’s experienced issues exploring a modified version of Google Search for China, but faced harsh pushback from employees and US regulators over how the product could impact users in the country.”

It’s rare that Google ends up the moral exemplar in this situation, but there you go.

Again, it’s unclear what the import here is. The Verge reported that Bing was blocked by a Chinese telecom provider in 2019 for an unspecified reason upon order of the government, but they were quickly restored. Whatever the case, they appeared to have learned their lesson — and somehow managed to make Google look good in the process.

C. Douglas Golden, The Western Journal
Ranchers Warn of Disease That Could 'Decimate' Cattle Industry - Biden's Open Border to Blame
Man Gets Exactly What He Asked for After Leaving MTG Threatening Voicemails, Daring Her to Press Charges
Biden Attempts to Tout Job Numbers, Gets Fact-Checked Hard by Musk's New Twitter Feature
Smithsonian Museum Kicks Out Students Over What They Had on Their Hats: Attorney
Two Defense Company Employees Mysteriously Found Dead at Facility During Night
See more...
Advertisement