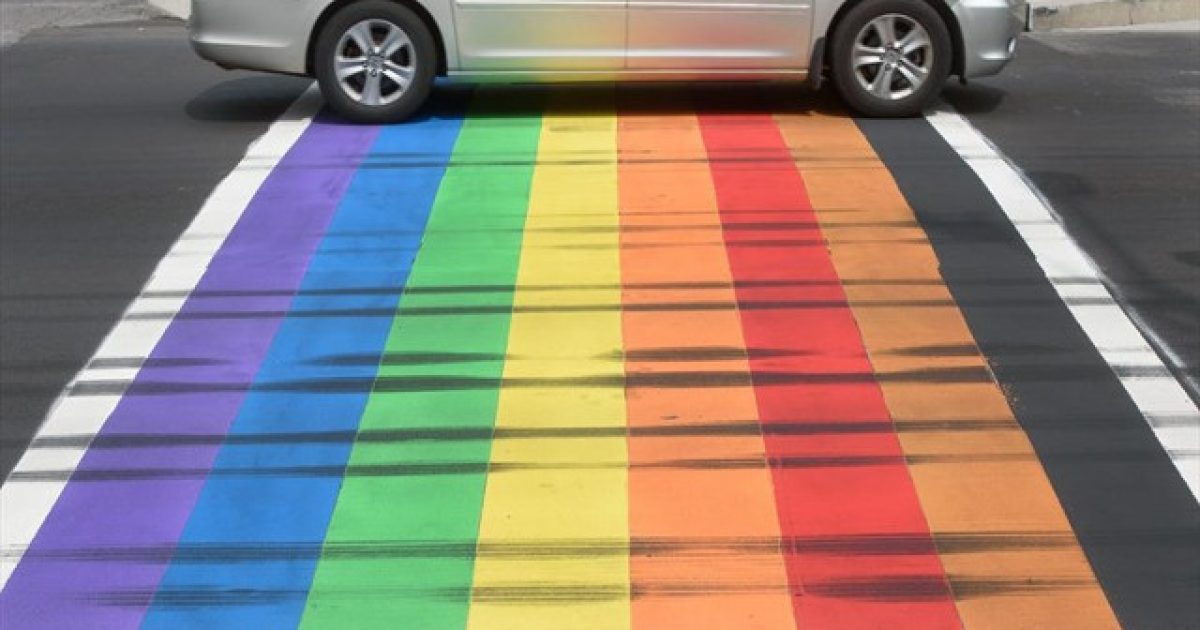 Mayor Fred Eisenberger is yet again providing further evidence to validate the suggestion that liberalism is indeed a mental disorder as he mulls over whether or not black tire marks on a gay pride rainbow flag crosswalk was the result of a bigoted vandal.

This, ladies and gentlemen, is the world we now live in. Hope you’re enjoying the ride.

Mayor Fred Eisenberger said there is some debate among staff as to whether the marks were made on purpose or are a normal occurrence of rubber wearing off tires on hot pavement in the dead of summer.

“I’m suspicious,” he said. “Just the way it (the marking) sits there. It’s odd that it’s just before and after the crosswalk (and into the crossing).”

Eisenberger said some staff think the marks may be due to this summer’s hot weather, but he noted that he hasn’t seen the same kind of tire impressions on white crosswalk markings.

“I suspect it’s wilful … but at this point, we’ll fix it and see what happens.”

The black marks will be eliminated with touch-up paint, he said.

“The good news is this is the only one with the problem.”

The rainbow crosswalks are a symbol of inclusiveness among the LGBTQ community.

David Ferguson, city supervisor of traffic engineering, said it’s always possible people may be doing burnouts or laying rubber on the crosswalks, but it is also possible the marks could be from tires wearing down in the heat and leaving marks on the hot pavement.

This is how this town is choosing to use their tax dollars? Decorating crosswalks and then launching investigations into supposed “vandalism” of the crosswalk paint?

Surely there’s others in this town who see the absolute insanity of decorative crosswalks, right? It’s a crosswalk, not an art exhibit. Good grief. This right here, is what’s wrong with this country, summed up in one story.

Alexandria Ocasio-Cortez’s Stunning Hypocrisy When it Comes to Taxis vs. Uber