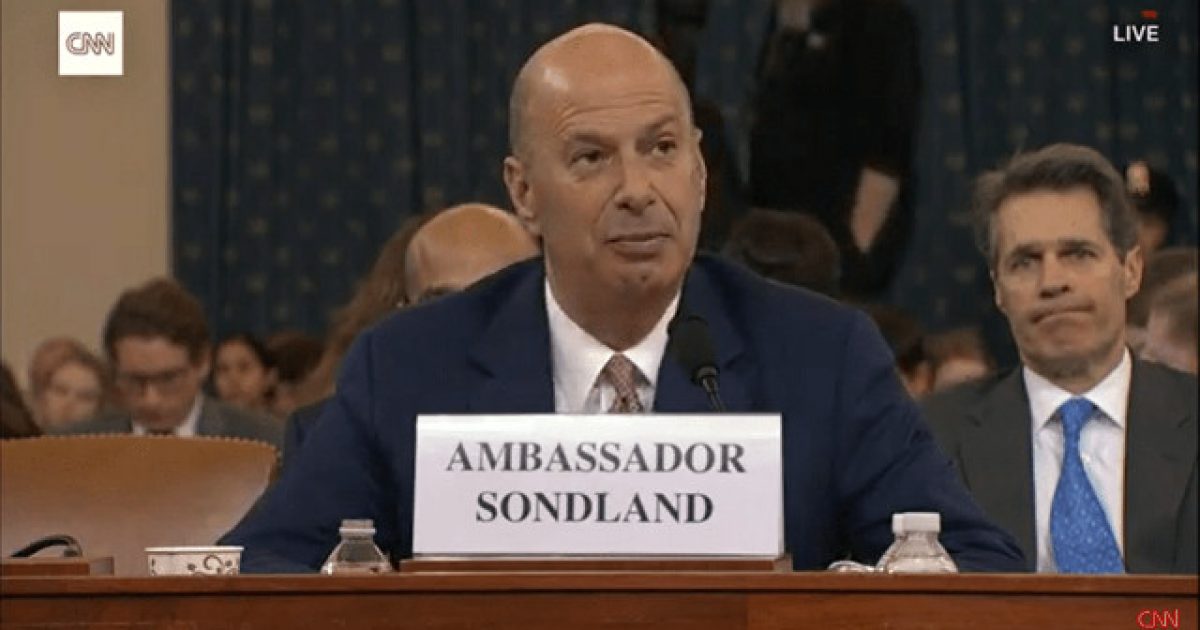 During Wednesday’s impeachment hearing, Ambassador Gordon Sondland, a critically important witness due to his close contact with the president on Ukraine, testified in a front of a congressional committee and stated in his opening statement saying there was a indeed a quid pro quo presented by Trump attorney Rudy Giuliani to Ukraine involving a White House meeting and call.

He also repeated that he “came to believe” the release of U.S. military aide to Ukraine was connected to the investigations, suggesting that he was not told so by the president.

“I know that members of this committee have frequently framed these complicated issues in the form of a simple question: Was there a ‘quid pro quo?’” Sondland said Wednesday. “With regard to the requested White House call and White House meeting, the answer is yes.”

In his opening statement Wednesday, Sondland underscored six key points, beginning with the role of Giuliani, with whom he said was directed by the president to work.

“First, Secretary [Rick] Perry, Ambassador [Kurt] Volker and I worked with Mr. Rudy Giuliani on Ukraine matters at the express direction of the President of the United States,” said Sondland. “We did not want to work with Mr. Giuliani. Simply put, we played the hand we were dealt. We all understood that if we refused to work with Mr. Giuliani, we would lose an important opportunity to cement relations between the United States and Ukraine. So we followed the President’s orders.”

Sondland went on to make it clear other officials were not quite comfortable to work with Giuliani, but “did not believe his role was improper at the time.”

“Second, although we disagreed with the need to involve Mr. Giuliani, we did not believe that his role was improper at the time. As I previously testified, if I had known of all of Mr. Giuliani’s dealings or of his associations with individuals now under criminal indictment, I would not have acquiesced to his participation. Still, given what we knew at the time, what we were asked to do did not appear to be wrong.”

The ambassador went on to stress that accusations made by other officials and himself were “engaged in some irregular or rogue diplomacy: is “absolutely false.”

“Third, let me say: precisely because we did not think that we were engaging in improper behavior, we made every effort to ensure that the relevant decisionmakers at the National Security Council and State Department knew the important details of our efforts. The suggestion that we were engaged in some irregular or rogue diplomacy is absolutely false,” Sondland said. “I have now identified certain State Department emails and messages that provide contemporaneous support for my view. These emails show that the leadership of State, NSC, and the White House were all informed about the Ukraine efforts from May 23, 2019, until the security aid was released on September 11, 2019. I will quote from some of those messages with you shortly.”

In his fourth point, Sondland spoke about the “quid pro quo” arrangement that was pushed by Giuliani.

“Fourth, as I testified previously, Mr. Giuliani’s requests were a quid pro quo for arranging a White House visit for President Zelensky,” the ambassador said. “Mr. Giuliani demanded that Ukraine make a public statement announcing investigations of the 2016 election/DNC server and Burisma. Mr. Giuliani was expressing the desires of the President of the United States, and we knew that these investigations were important to the President.”

“Fifth, in July and August 2019, we learned that the White House had also suspended security aid to Ukraine,” said the ambassador. Ambassador Sondland went on to explain:

I was adamantly opposed to any suspension of aid, as the Ukrainians needed those funds to fight against Russian aggression. I tried diligently to ask why the aid was suspended, but I never received a clear answer. In the absence of any credible explanation for the suspension of aid, I later came to believe that the resumption of security aid would not occur until there was a public statement from Ukraine committing to the investigations of the 2016 election and Burisma, as Mr. Giuliani had demanded. I shared concerns of the potential quid pro quo regarding the security aid with Senator Ron Johnson. And I also shared my concerns with the Ukrainians.

“Finally, at all times, I was acting in good faith,” Sondland concluded. “As a presidential appointee, I followed the directions of the President. We worked with Mr. Giuliani because the President directed us to do so. We had no desire to set any conditions on the Ukranians. Indeed, my personal view — which I shared repeatedly with others — was that the White House meeting and security assistance should have proceeded without pre-conditions of any kind. We were working to overcome the problems, given the facts as they existed. Our only interest was to advance longstanding U.S. policy and to support Ukraine’s fragile democracy.”

ICYMI: Bernie Says Ocasio-Cortez Will Be Key Piece of Administration If He Becomes POTUS