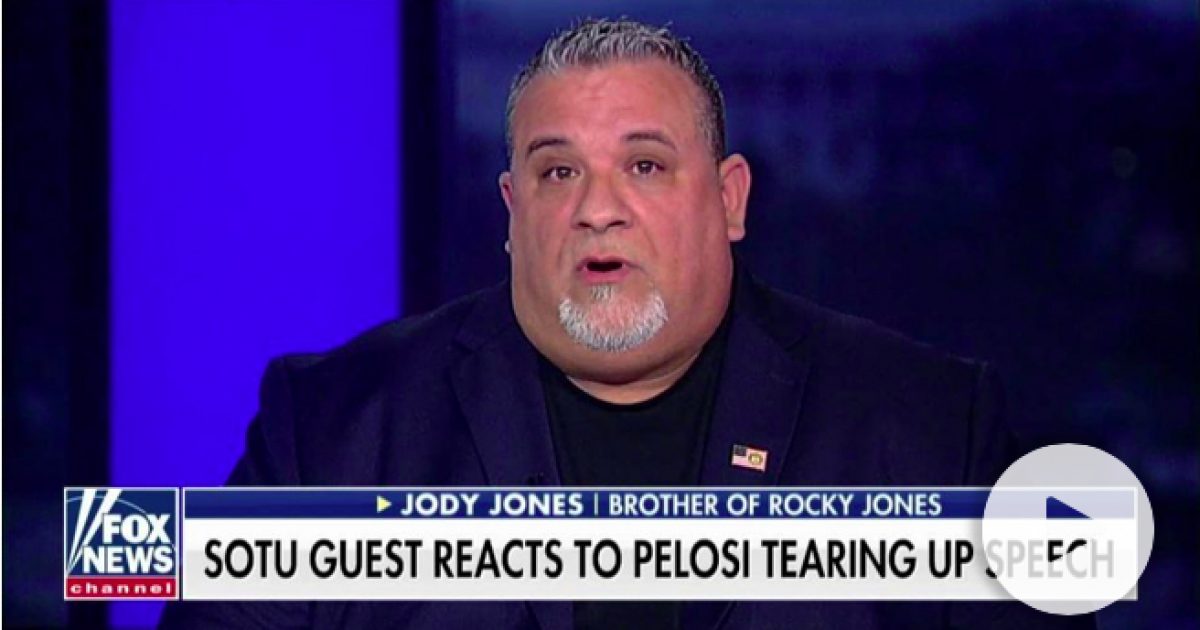 House Speaker Nancy Pelosi has proven that she definitely hates Trump more than she loves America by ripping up the president’s speech right after he delivered it at the State of the Union event Tuesday evening.

It’s the most petty of actions, particularly when you take into account all of the people Trump honored in the speech that Pelosi disrespected with her actions.

One of the president’s guests, whose brother was murdered, went on to say Pelosi’s antics “ripped our hearts out.”

This is now her legacy, folks.

Appearing on “Fox & Friends,” Jody Jones — a Farmersville, Calif., resident — said that in Pelosi’s decision to rip up her copy of the president’s address, she effectively ripped the hearts of every guest in attendance out of their chests.

“It felt like she ripped our hearts out,” he said.

“Everybody there. All of the guests. We couldn’t believe it.”

Following the conclusion of the speech, Pelosi said in a statement that the president’s message to the country was not only deceitful but exposed a president unfit to hold office.

President Trump was impeached for abuse of power and obstruction of Congress. By refusing to call witnesses and compel documents, Senate Republicans have chosen to become accomplices in his cover-up. #DefendOurDemocracy https://t.co/cHfatTHnbh

“The manifesto of mistruths presented in page after page of the address tonight should be a call to action for everyone who expects truth from the president and policies worthy of his office and the American people,” Pelosi wrote in her statement. “The American people expect and deserve a president to have integrity and respect for the aspirations for their children.”

What Pelosi fails to understand is that there are tons of people who were on the fence about voting for President Trump until both the false impeachment narrative and her actions last night pushed them over the edge.

The Democratic Party is causing themselves to lose this election in an even bigger way. It’s crazy to think they can’t see this, but it seems they are totally blinded by hatred.

No, Taylor Swift — Tennessee Christianity Does Not Support Your View [Opinion]

Celebrities React To Trump’s State Of The Union Speech