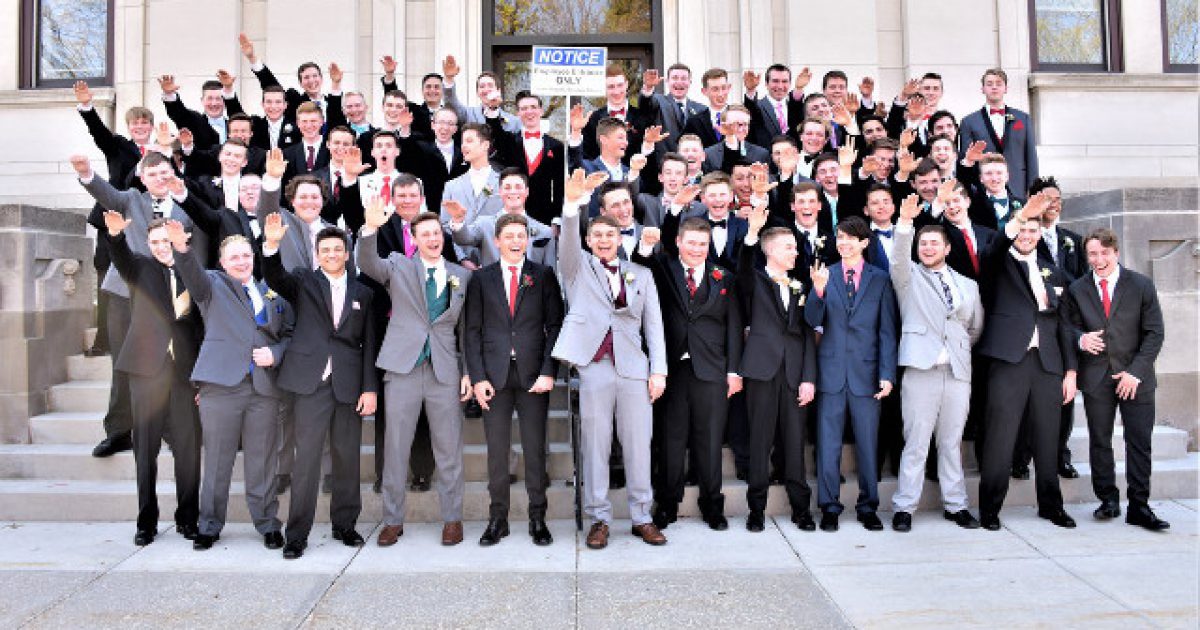 Police in Wisconsin are assisting a local school district with an investigation over a disturbing prom photo that features dozens of male students giving a Nazi salute.

According to Suzdaltsev, the students in the photo are from the Class of 2019 and it was taken during junior prom. The photo was “apparently taken by one of the parents, and is on the parent’s website as part of their collective prom photos,” he noted.

Correction: The photo of students doing salutes is the Class of 2019, not 2018, and was taken during their junior prom.

Here is a higher resolution photo (which was apparently taken by one of the parents, and is on the parent's website as part of their collective prom photos.) pic.twitter.com/lkrFln9pyz

On Monday, Baraboo School District Superintendent Dr. Lori Mueller released a statement condemning all “hate” and acknowledging the photo while making it clear that it was not taken on school property.

“Early this morning, a photo that was taken last spring of some Baraboo School District students who appear to be making extremely inappropriate gestures began circulating on social media,” said Mueller in the statement. “The district has confirmed at this time that the photo was not taken on school property or at a school-sponsored event.”

“With that, we want to be very clear: the Baraboo School District is a hate-free environment where all people, regardless of race, color, religion, creed, sex, sexual orientation, gender identity, national origin or ancestry, are respected and celebrated,” the statement continued.

The Baraboo School District sent the following letter to parents this morning in response to a photo circulating on social media. We are launching an investigation, and as such, are unable to provide additional details at this time. pic.twitter.com/oRxcl82lJT

Local Baraboo Police have stated they will be assisting in the investigation in a tweet posted on social media:

The Baraboo Police Department is aware of a controversial photo of a group of high school students that has been posted to social media. Officers are assisting the Baraboo School District with their investigation into this matter.

Jordan Blue, one of the students in the photo not giving the salute spoke to the media about the anti-Semitic salute.

“My name is Jordan Blue, I am the boy captured in the photo to the far right,” wrote the student. “The photo was taken during out Junior Prom Photos. I clearly am uncomfortable, with what was happening. I couldn’t leave the photo as it was taken within 5 seconds. The photographer took the photos telling us to make the sign, I knew what my morals were and it was not to salute something I firmly didn’t believe in.”

“I attend BHS, these classmates have bullied me since entering middle school,” Blue continued, “I have struggled with it my entire life and nothing has changed. … nothing has been done and my question is.. [will] anything ever be done. I truly & firmly believe we need to make a change to this horrible act, it needs to stop. Bullying. Immaturity. [A]nd just taking things as a ‘joke.'”

I spoke with the only student who is visibly not comfortable with the “salute”, he provided this statement. pic.twitter.com/HbNBc8xLOK

This photograph is disturbing on so many levels, it’s almost hard to give an adequate breakdown of it. This gesture is one grounded not only in hatred, but also in mass murder.

Nazis killed six million Jews in cold blood, with the ultimate goal being extermination of the entire race. Nothing associated with these monsters or their actions should ever be used as some sort of joke. It’s insensitive to Jewish people, the nation of Israel, and all decent human beings everywhere who were impacted by the Holocaust.

Let’s hope these kids learn a valuable lesson in respect from all of this.

Top Trump Aide Backs Hillary Clinton 2020 Run, But It’s Not What You Think