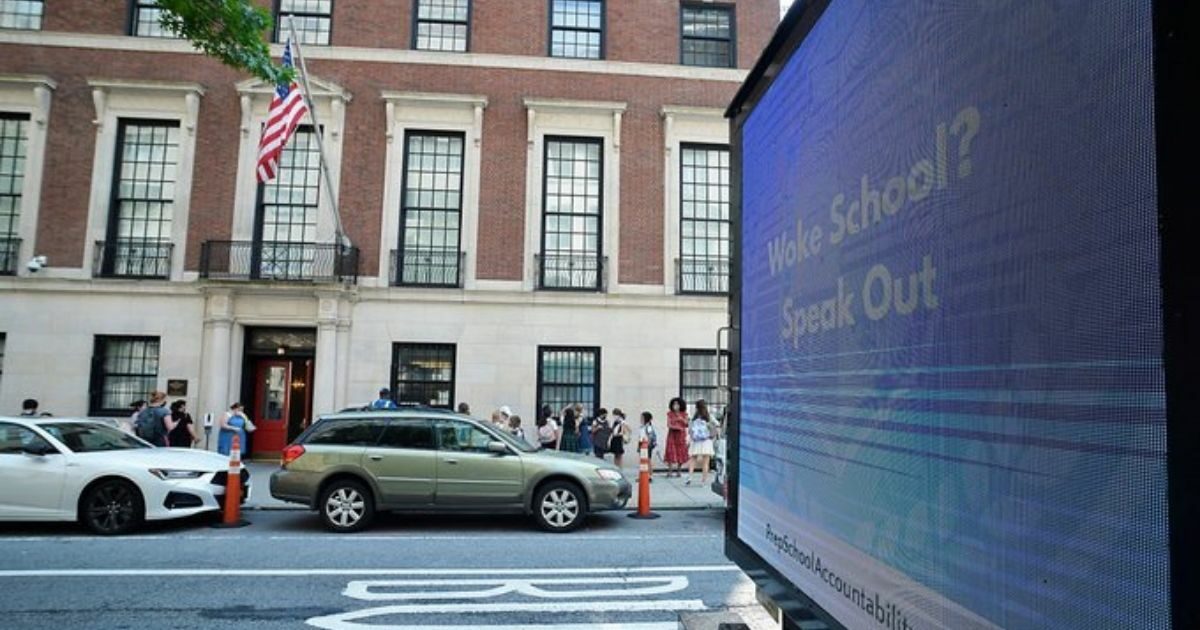 Roughly 21 percent of American adults are functionally illiterate, according to data from the National Center for Educational Statistics. Furthermore, two out of three high school graduates attend college or enter the workforce reading below grade level.

This poses a problem for advocates of critical race theory and other peddlers of woke gobbledygook. How are kids supposed to internalize their written propaganda if they can’t read properly?

“They sat there in their graduation dresses while the white mothers of the white students — many of whom volunteer, donate, call, email and do whatever the school asks of them — were tarred and feathered in a video their teacher showed them. While their white female teachers were mocked,’’ Baron said in a letter to school officials, which was obtained by the New York Post and reported Tuesday.

Journalist Megyn Kelly also obtained a copy of the letter and posted it to Twitter.

“We just left this school bc of its growing far-left indoctrination,” the former Fox News and NBC News host said Tuesday. “This is a place we’ve loved-breaks my heart they’re doing this.”

(Another) Spence parent pulls her kid after grossly racist episode attacking white women is forced on girls in class on last day of school. We just left this school bc of its growing far-left indoctrination. This is a place we’ve loved-breaks my heart they’re doing this. pic.twitter.com/DLEMMCvPUa

The video, according to Baron, was the first episode of a new talk show hosted by comedian Ziwe Fumudoh, who is no stranger to controversy as a result of her anti-white content.

While “tarred and feathered” was meant metaphorically and not literally, the description is apt.

I watched the whole thing so you don’t have to, but if you want to subject yourself to 24 minutes of pain, you can find it here. Here’s a sampling of some of the, uh, “highlights” of this self-promo video masquerading as a talk show:

Lebowitz, who so looked miserable that I almost felt sorry for her, said that she agreed to do the interview “because somebody who worked for [Fumudoh] was incredibly persistent,” and it “seemed easier” to oblige her.

Fumudoh asked Lebowitz, who requested that the interview have no games, whether it is “standard for white women to come on to a show and dictate how things are supposed to go.”

What was one of the follow-ups? “What percentage of white women do you hate? And there is a right answer.” Somehow, that ended in Fumudoh comparing Lebowitz to the Rev. Martin Luther King Jr.

One “commercial” was a fake PSA clearly meant to depict white women as vapid, racist hypocrites, and that was followed by an equally racist (and horribly pitchy) music video.

Fumudoh finished her “Karen” interview by giving all four women temporary tattoos that said “Karen & Proud,” allegedly in an effort to promote “kindness.”

In her final interview, with Steinem, Fumudoh inquired as to how many black friends the famed feminist has before reading lyrics from the extremely vulgar song “WAP” and asking Steinem if she felt empowered.

Baron rightly pointed out the hypocrisy of leftists and their, as she termed it, “blatantly racist” video.

“Had a similar video been shown making fun of ANY OTHER racial group, Spence, its faculty, the Board and the entire community would be whipped into a frenzy,’’ she said. “Is Ziwe’s video somehow not racist and acceptable to Spence because it attacks whites?”

One would hope that such a vigorous, negative missive would generate some kind of response from the school, but any actions on its part have been tepid at best.

“This satirical video is not a part of our curriculum,” the school told the Post in an email.

“We trust our dedicated teachers and stand by their professionalism and commitment to our students,” it added.

Perhaps the commercials were satirical, but the show identifies as a variety, late-night talk show, not a satire — something that Fumudoh herself has admitted.

“It’s kind of complicated,” she told Business Insider. “My art imitates life. So, the ways in which I interpret my life experiences will reflect the art that I create.

“So, it’s not that I woke up one day and said, ‘Race is important to me and thus it will be my art.’ It was merely that these were things that I had to confront throughout my life. I found them to be both tragic and hilarious. So, my ways of coping with trauma are to laugh.”

The Post reported Thursday that Spence doubled down on its platitudes.

“We are sorry for any harm this has caused to anyone in our community,” said Bodie Brizendine, the school’s head — while suggesting that the politically correct all-girls institution may be changing how it does things in the future.

“We will be strengthening faculty protocols,’’ the administrator followed.

I’ll believe it when I see it. More than likely, the school will try to shove this under the rug and hope people forget.

I just want kids to be able to read properly.