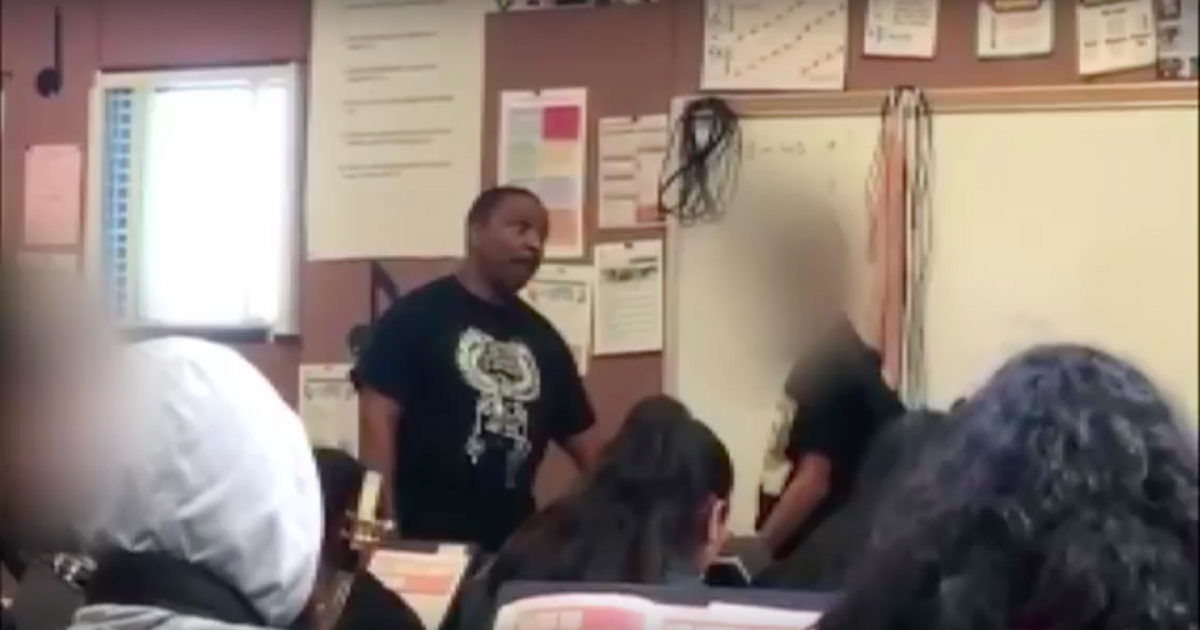 A 14-year-old boy was punched in the face by his 64-year-old teacher after the young man hurled racial slurs and various other profanities at the teacher.

The incident occurred during Marston Riley’s  music class at Maywood Academy High School in Southeast Los Angeles and was recorded on cell phones by other students in the class.

Videotape shows the boy throw a basketball at Riley, prompting him to pull out his cellphone to ask for help. The boy allegedly continued to hurl profanity and the “n-word’ at Riley, who then punched him.

According to The Daily Mail, the verbal back and forth went like this:

KTLA reported, “The ensuing brawl lasts about 30 seconds, with the pair clambering across the room as Riley repeatedly delivers blows and others in the classroom shriek. The boy is only able to deliver about one punch. The video shows Riley continued to aggressively pursue the student even after other school officials responded to break up the fight. The footage ends as the student is being pulled from the room by campus staff.”

CNN noted, “The boy wound up on the ground wrapping his arms around Riley’s leg. Riley, at this point, repeatedly punches him.”

The students who were interviewed by local media outlet KTLA took the teacher’s side, saying their classmate simply pushed the man too far. One student stated, “Everything was planned out. There were students there who were already taking out their phones to record the incident. I don’t think it’s completely fair that they’re just putting the blame all on (Riley), when I personally know that he’s a good guy.”

Another student said they had the same teacher the previous year and had no issues with him, noting he typically had great relationships with other students.

Another video from a parent showed Riley in an altercation with another student over a year ago. Riley has been charged with child abuse. His arraignment is scheduled for November 30.

The Los Angeles Unified School District released a statement: “We are extremely disturbed by the reports of the events that occurred at Maywood Academy High School. We take this matter very seriously and do not condone violence or intolerance of any kind. Los Angeles Unified is cooperating with law enforcement in investigating this incident. Crisis counselors and additional School Police patrols will be at the school on Monday to support our students and staff.”