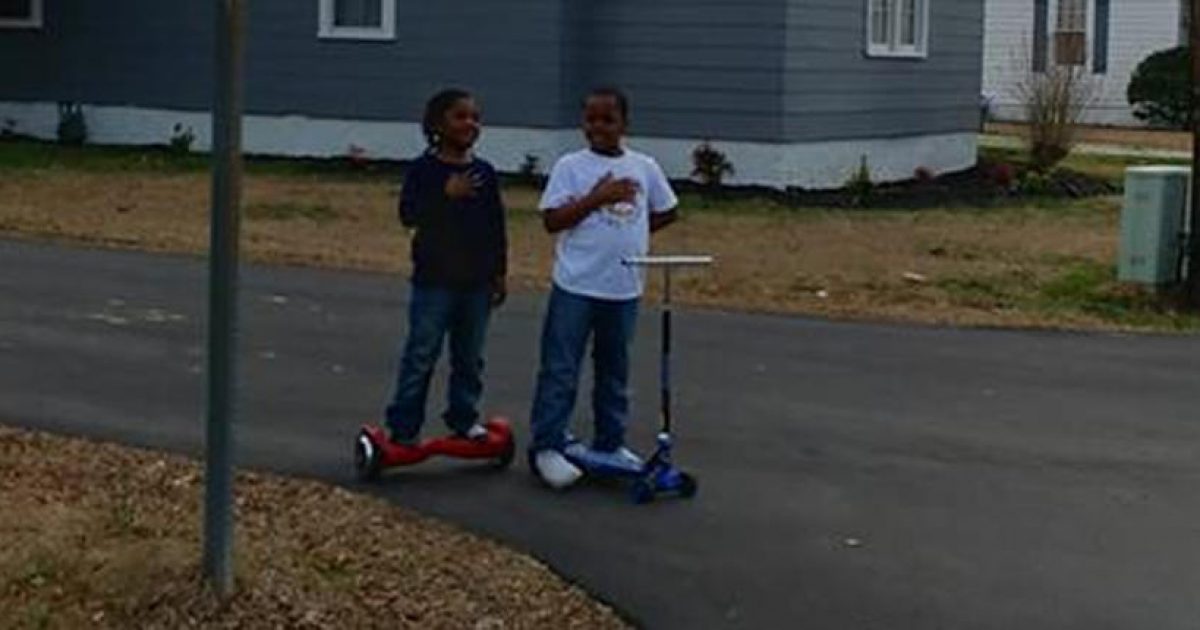 Now THIS is a great story!

With all the controversy over standing for the flag or reciting the Pledge of Allegiance in schools over the last few years, it sadly seems like a novelty for young people to be instilled with the values of patriotism and respect for our flag.

Two young men are going viral for being the subjects of a picture snapped by North Carolina Fire Chaplain Bobby Herring, who was inspired to see the children stop and recite the Pledge of Allegiance as he raised the flag over the Roseboro Fire Department.

“This afternoon as Chaplain Herring was raising the U.S. flag to full staff, he looked over to the intersection and saw these two young people standing there with hands on their heart saying the pledge of allegiance,” the post read. “God bless our community.”

This afternoon as Chaplain Herring was raising the U.S. flag to full staff, he looked over to the intersection and saw…

The boys, who are cousins, were riding by the fire station on a scooter and hoverboard when they noticed the flag being raised, Raleigh’s WRAL reports.

The original post has been shared over 10,000 times across social media and has been flooded nearly 1,000 comments praising the boys and expressing encouragement and appreciation for this heartwarming display of young patriotism.

The boys were identified by the Roseboro Fire Department as Derrick Tyrone Ingram Jr., and Thomas Edwards Jones, Jr, according to the Charlotte Observer. Their families are very proud of them.

“My son and my nephew,” Ladii J Ingram shared on the Facebook post. “This made my whole day.” Her post was full of comments praising her and her family for raising the boys so well. “Thank you for instilling respect in your young men!”

“Their response was taught, and taught well,” wrote one commenter. “Please congratulate these young men for the respect they showed our great flag and our great nation. They are setting the example for others to follow.”

“The fact that they stood there showing respect without being prompted to do so says a lot about how they are being raised,” another Facebook user wrote on the original post.

It just goes to show that no matter what is going on in the culture, nothing can overpower the impact of good parenting!

Related Topics:childrenFeaturedparentingpatriotismviral photo
Up Next

Teacher Shocked to See 7-Year-Old Student Riding Bike on the Highway. Then She Found Out Where He Was Going.