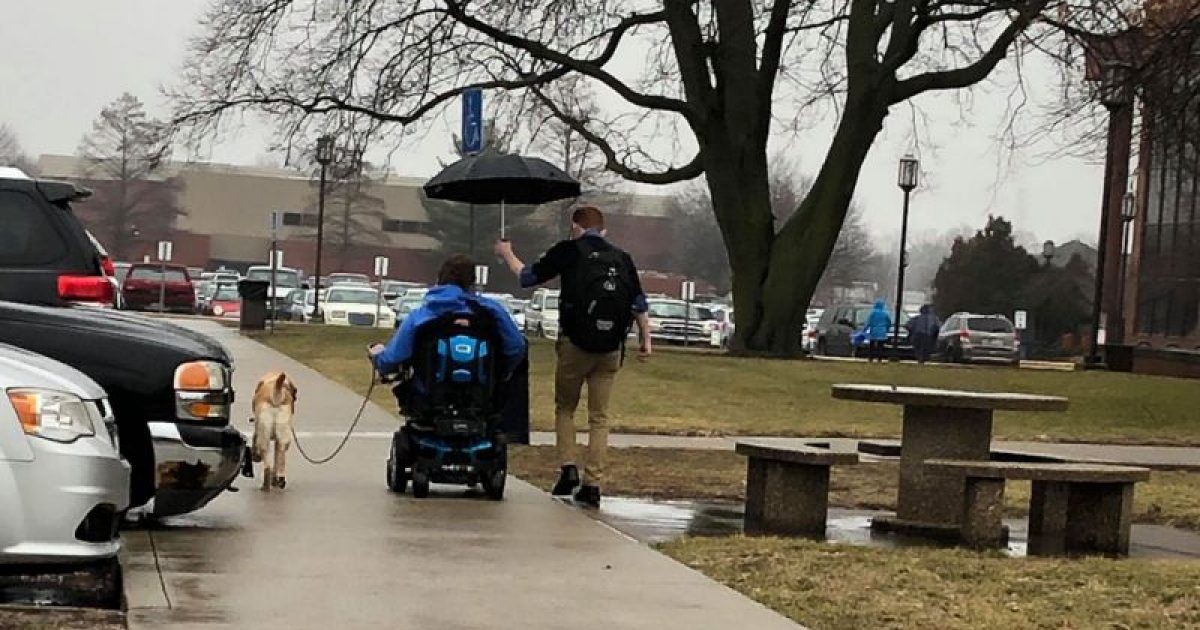 Young people these days get a pretty bad rap.

They’re often harshly criticized for their dependence on their smartphones, their admitted inability to “adult,” and their membership in the same generation that boasts socialist airhead Alexandria Ocasio-Cortez.

Of course, these are all generalizations, and there are plenty of hard-working, intelligent, and kind young people out there who, in the age of social media, often get recognition for simple acts that go viral.

So don’t forget what young people are capable of!

One such young person who is being praised across the interwebs is Vincennes University student Andrew Cohen’s gracious offer to a wheelchair-bound student who he noticed headed to class in the rain.

It was pouring in Vincennes, Indiana, on Wednesday when Cohen, a business administration major, saw a fellow student in a wheelchair across the parking lot headed towards class in the rain with his service dog and no umbrella.

“It was also drizzling outside and I thought he could use an umbrella,” Cohen told Yahoo Lifestyle. “So I crossed the street and held my umbrella over his head as we passed.”

Cohen held up his own umbrella for the student and walked him all the way to the building for his next class. The two had never met before. “I’d never talked to him before that day,” Cohen told Yahoo Lifestyle. “I found out his name was Parker and his dog’s name was Herb.”

Elizabeth Stevens-Hardin, an employee at Vincennes University, was on her way to lunch when she happened upon the moment.

“It really touched my heart. He was getting soaked and running to keep up with the student to keep him covered,” Stevens-Hardin told Yahoo Lifestyle. “My thoughts were, ‘What a wonderful young man!’ If either one of those boys were my son I would want a picture of that.”

Stevens-Hardin, a production manager at the college’s radio station Blazer 91.1 WVUB, quickly snapped a photo and later posted it to WVUB’s Facebook page with a caption that read, “Spread kindness!”

This pic was taken by a staff member on her way to lunch. She spotted this young man running across a parking lot to provide an umbrella for a another student. Spread kindness! #blazer911wvub

When Cohen caught wind of the heartwarming praise social media users had poured upon him once the post went viral, he humbly posted he wasn’t the only one who had reached out to the student.

“I appreciate all the kind words people are giving me for my action,” Cohen wrote on his Facebook.  “However, what wasn’t captured were the other four or so students taking time out of their day to help him free his wheelchair when it became stuck. I was really far from all of this and they managed to dislodge it before I reached them. I was not the only one showing kindness today.”

I appreciate all the kind words people are giving me for my action. However, what wasn’t captured were the other 4 or so…