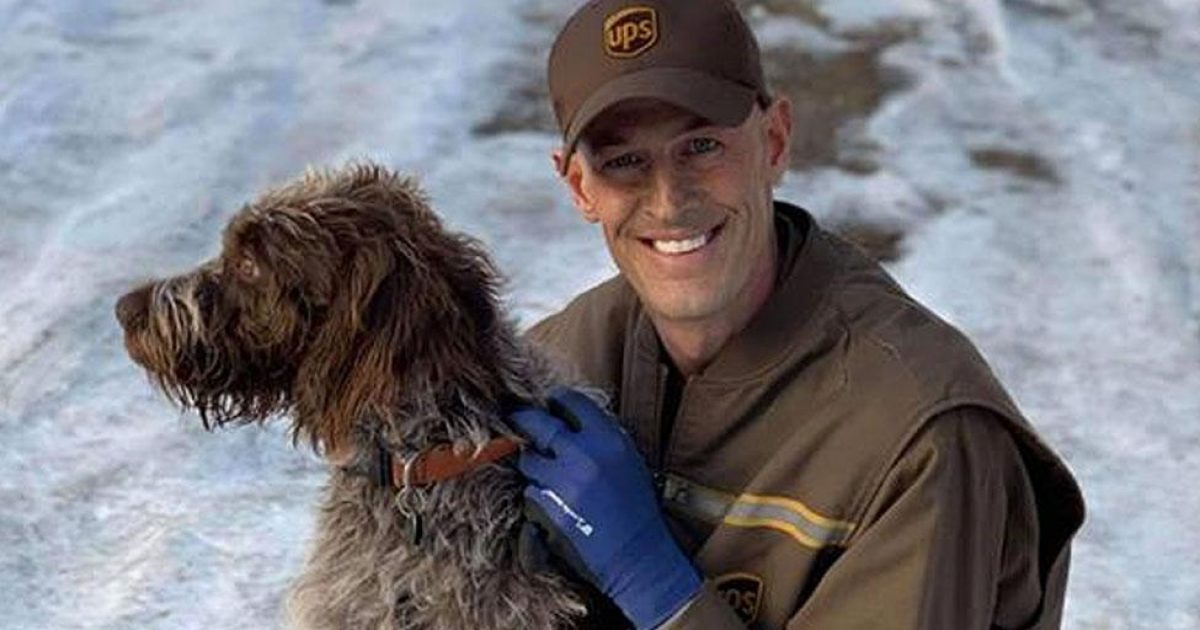 How far out of your way would you go to rescue the helpless? Or, more specifically, how much danger would you allow yourself to be in so you could save a life?

We expect these considerations to be made when someone becomes a police officer, a firefighter, or a soldier, but even those in civilian occupations find themselves in situations where these questions need to be asked.

For Ryan Arens, a UPS delivery driver, there was absolutely no question. When he encountered a dog who would certainly have died without his help, Arens was ready to risk his own life in order to save her.

“Animals are my weakness. It was the highlight of my 14-year UPS career,” Arens said, recalling the incredible incident to the Great Falls Tribune.

On an ordinary route in Bozeman, Montana, Arens said he saw a distressed dog howling and crying from a frozen pond.

Arens quickly delivered the package in his hands and rushed over to the pond where he found the dog “screaming and going crazy.”

“I could see the dog trapped about 10-15 feet off of shore, with ice all around it,” he said. An older man on a boat was on the scene trying to get to the dog but, Arens explained, he was unable to chip away at all the ice in order to reach the dog.

Without a moment’s hesitation, Arens sprang into action to save the terrified animal.

“I stripped to my boxers and got the guy out of the boat. Then, I slid the boat out onto the ice, using it to distribute my weight,” he said. “I shimmed out to where the ice was thin.”

Arens came closer and closer to the dog before the boat crashed through the thin ice. It’s then that Arens says he saw that the dog “was starting to go under,” so he swam through the frigid water to reach her.

The brave delivery driver was able to grab the dog’s collar and pull her to the thicker ice and back to safety where a bystander offered the freezing pair a blanket. Arens and the thankful pup were welcomed into the boater’s warm home while they awaited help from first responders.

As a UPS guy, Arens has surely made someone’s day at least a handful of times throughout his career, but this day topped them all. “Animals are my weakness,” he said. “It was the highlight of my 14-year UPS career.”

“This dog had a whole lot of life left in her, and I’m really glad I was able to act when I did,” Arens said, describing Sadie, the wirehaired pointing griffon. “She’s a sweetheart.”

While Sadie couldn’t use words to express her thankfulness to Arens for his incredible courage, a chance reunion when he came to deliver a package to her family’s home became her chance to say—or bark—”thank you.”

“She must have remembered me,” Arens said warmly of the dog, who was barking excitedly when she saw him again. “It sure made me feel good.”

She Got Pulled Over For Expired Tags, But What The Officer Did Next Was Totally Unexpected