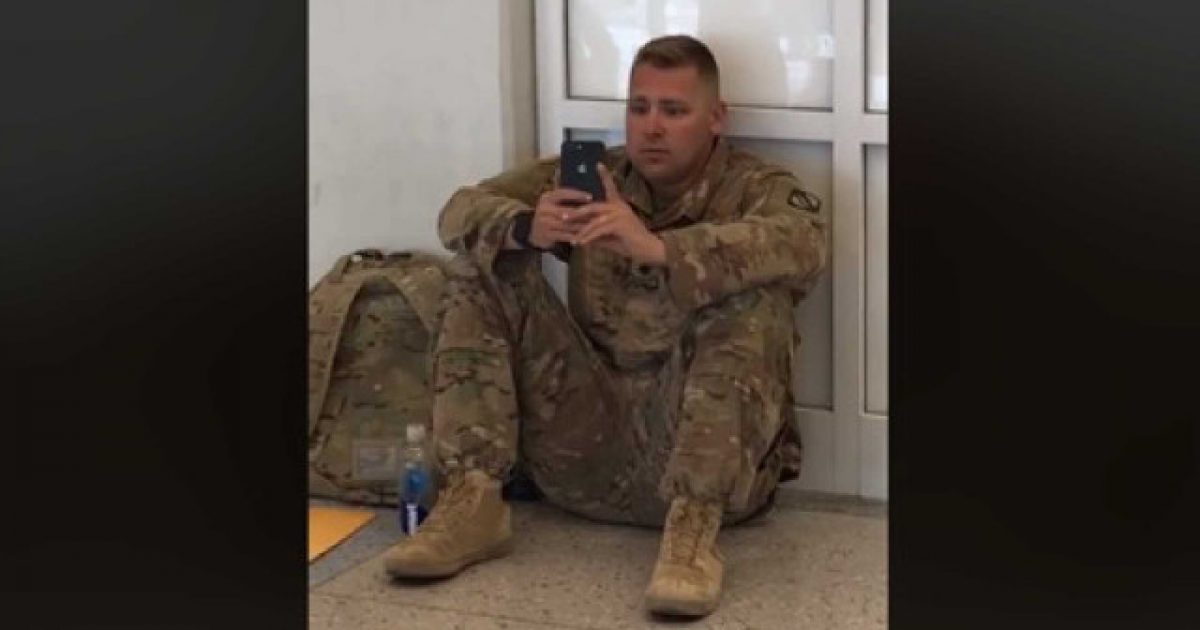 A video of a U.S. soldier stranded in an airport has become an Internet sensation, and when you watch the video it’s not hard to understand why it’s become a hit.

We live in tumultuous times where there seems to be a line drawn in the sand and everyone is choosing sides, attacking anyone not on their side of the line with vitriol and venom. There is a shortage of material online that reminds us all that, despite our political differences, we’re all still human beings made in the image of God, living together on a wild journey called life.

Fortunately, for the moment, this video is filling in the gap.

This soldier found himself stuck at the airport on the night that his wife was due to give birth to their daughter. However, thanks to the miracle of modern technology, Brooks Lindsey was able to FaceTime with his wife back in Texas and witness the birth of their child.

His reaction was caught on video and it’s priceless.

Tracy Dover, like Mr. Lindsey, was in the airport as well due to a delayed flight. She captured a photo of the soldier witnessing the birth via FaceTime and posted it to her Facebook. “This Army soldier was on my delayed flight home yesterday to MS. He had to watch the birth of his daughter on FaceTime. He was crying and our hearts were breaking. We all gave him space. When we heard the baby cry, we all rejoiced for him. I wanted to share this because I never want us to forget about our soldiers who serve us everyday and the sacrifices they make,” she wrote.

The photo went viral, with tens of thousands of Americans “liking” and sharing the post, mostly noting the young father’s sacrifice for our country.

Mr. Lindsey’s wife, Haley, posted a video of her husband watching the birth of their daughter Millie. “Here’s the video of Brooks Lindsey watching Millie come into the world,” she wrote.

Here’s a photograph of Lindsey as his precious baby girl was born.

The Lindseys have received tons of love in the form of online messages ever since the video went viral, which proves the point mentioned earlier, that we just need to be reminded sometimes of our shared humanity.

Our soldiers are special people who sacrifice so much to ensure our way of live continues unhindered by the threats of evil men who hate our country. They deserve the highest honor and respect we can afford them for being willing to run into the line of fire.

God bless this soldier and his new baby girl!