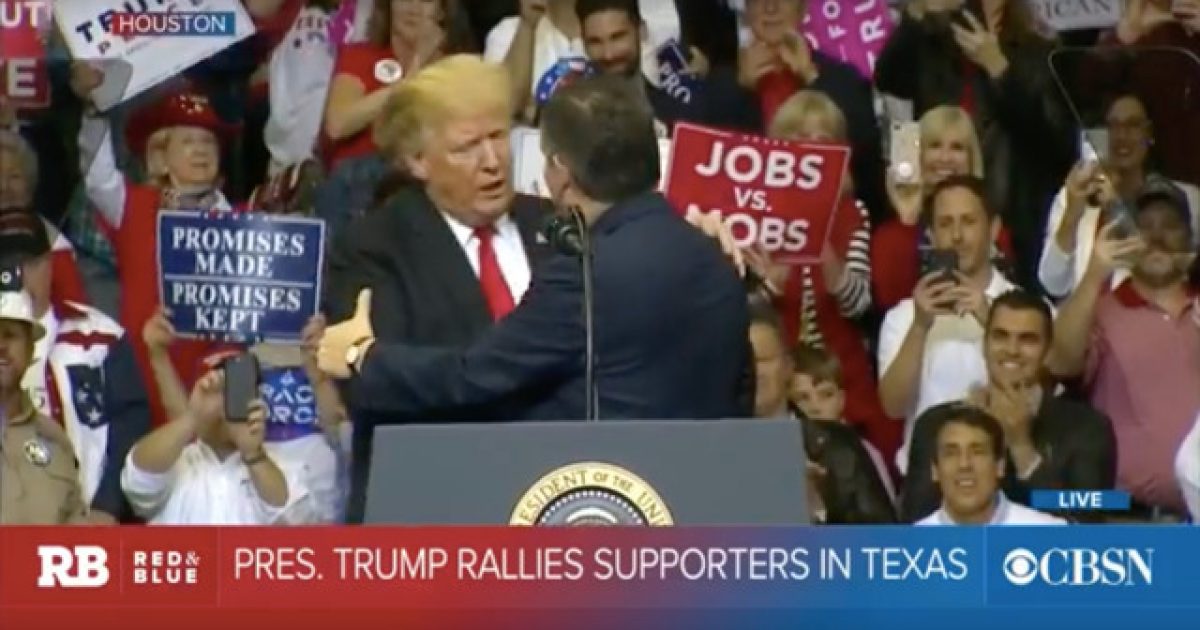 President Trump and Sen. Ted Cruz teamed up on Monday for a MAGA event in Houston, speaking to a packed out crowd about important current events and issues that directly impact the lives of voters across the country, including the migrant caravan that is marching toward the United States border.

Trump also spoke about Cruz’s opponent, Beto O’Rourke, calling him a “stone cold phony.” In other words, it was a night full of classic Trump.

“You know how the caravan started? Does everybody know what it means? I think the Democrats had something to do with it, and now they’re saying, ‘I think we made a big mistake.’ Because people are seeing how bad it is. How pathetic it is,” Trump said. “That is an assault on our country.”

The president said there “are some very bad people” in the caravan heading to the U.S. border, which now numbers as many as 10,000. And Trump said voters aren’t happy about that, nor were they pleased with the way his Supreme Court justice nominee was treated.

“I think Beto O’Rourke is highly overrated,” Trump said. “What I heard about him, I figured he must be something a little special. He’s not. I thought he got beaten badly in the debates. I think he’s a highly overrated guy.”

“And he pretends to be a moderate, but he’s actually a radical, open-borders left-winger,” Trump said.

Supporters of the president began lining up outside of Houston’s 18,000-seat Toyota Center more than 24 hours before the president was set to speak. The event was moved from a 8,000-seat venue after demand outpaced supply, and even once inside the Houston Rockets home court arena, requests for tickets topped 100,000 people.

Trump addressed the bad blood between he and Cruz during the 2016 election and stated that he is now longer “Lyin’ Ted” but has become “Texas Ted.” He went on to say that things got nasty during the election, but once it was over they got along great, even going so far as to say he likes Ted.

It’s good to see they’ve buried the hatched and gotten rid of all the bad blood between them, because right now, with the current condition of the country and the political climate, we need all hands on deck.

Trump Mocks Elizabeth Warren Over DNA Test, Vows to Keep Doing This From Now On