Treasury Department – Has the US gone Communist?
Conservative Firing Line

In Echo of The Holocaust, Russian Troops Pilfer Gold Teeth from Living and Dead Ukrainians
Flag And Cross

One surefire way to tell how well the DOJ’s investigations into Donald Trump are going is to see just how focused they are.

It stands to reason that the Justice Department would have a laser-like, pin-point probe had they found some evidence of some actual crime having been committed by the former President.  After all, with the entire force of the federal government behind them, you’d think that they’ve be able to dig up all of the data they’d ever need to accomplish their goal of preventing Trump from running for office again.

But instead, there have been zero charges filed against Trump, and zero indication that any are coming.

And, to top it all off, the DOJ has gotten so desperate in their attempts to catch Trump in something, that they’re now sending FBI agents after his buddies while they’re ordering fast food.

MyPillow CEO Mike Lindell, a supporter of Donald Trump who has espoused the former president’s false claims that the 2020 election was stolen, said he was served a federal subpoena Tuesday and that his phone was seized by federal agents.

Lindell claimed in a video posted online Tuesday that FBI agents approached him after he ordered food at a Hardee’s drive-thru in Mankato, Minnesota. Patrick McSweeney, an attorney for Lindell, confirmed in an email to CBS News that the subpoena was served and Lindell’s cell phone was confiscated.

“We pull ahead and a car comes perpendicular and parks a little ways in front of us, and I’ve been around the block, and I said to my buddy, I said, ‘Uh that’s either a bad guy, or it’s FBI,'” Lindell said in the video.

Lindell didn’t seem too terribly upset, and even went out of his way to suggest that the agents involved were all rather polite.

Donald Trump, on the other hand, was livid. 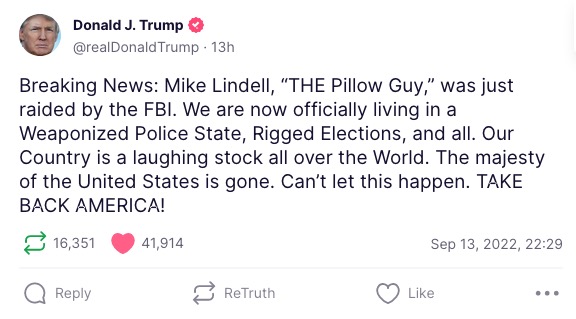 Donald Trump has yet to face any charges in any of the plethora of investigations that he currently faces, leading a great deal of credibility to the theory that the DOJ is simply fishing for political dirt to use against him in upcoming elections.

Andrew West
As a lifelong advocate for the dream promised us in the Constitution, Andrew West has spent his years authoring lush prose editorial dirges regarding America's fall from grace and her path back to prosperity. When West isn't railing against the offensive whims of the mainstream media or the ideological cruelty that is so rampant in the US, he spends his time seeking adventurous new food and fermented beverages, with the occasional round of golf peppered in.
The Schaftlein Report | OPEC+ Cut Production 2M Barrels a Day
In Echo of The Holocaust, Russian Troops Pilfer Gold Teeth from Living and Dead Ukrainians
WATCH: Creepy 'Ghost' Caught on Video Camping Tutorial
OPEC Trounces Biden as Russia, Saudi Arabia Slash Production
Russia Rolls Out 'Doomsday' Nuke for Test as Putin Turns Desperate
See more...
Advertisement

In Echo of The Holocaust, Russian Troops Pilfer Gold Teeth from Living and Dead Ukrainians

The Russian army won’t likely live this down.

As the month of October arrives, many of us will undoubtedly find ourselves in the mood for something spooky. Maybe it’s your yearly rewatching of The Shining, or an overnight […]

The move may be aimed at adding undue stress to the American wallet.

This is just INSANE.

This unusual unwillingness to cozy up to the Kremlin’s talking points signals a major shift for Russia, and perhaps puts another nail in the coffin of Putin’s time atop the pile.

Trump is not going down without a fight.

According to a report, President Joe Biden is planning to protect hundreds of thousands of illegal immigrants via executive action.
By Michael Austin, The Western Journal  October 4, 2022 Comment MoreShare
Next