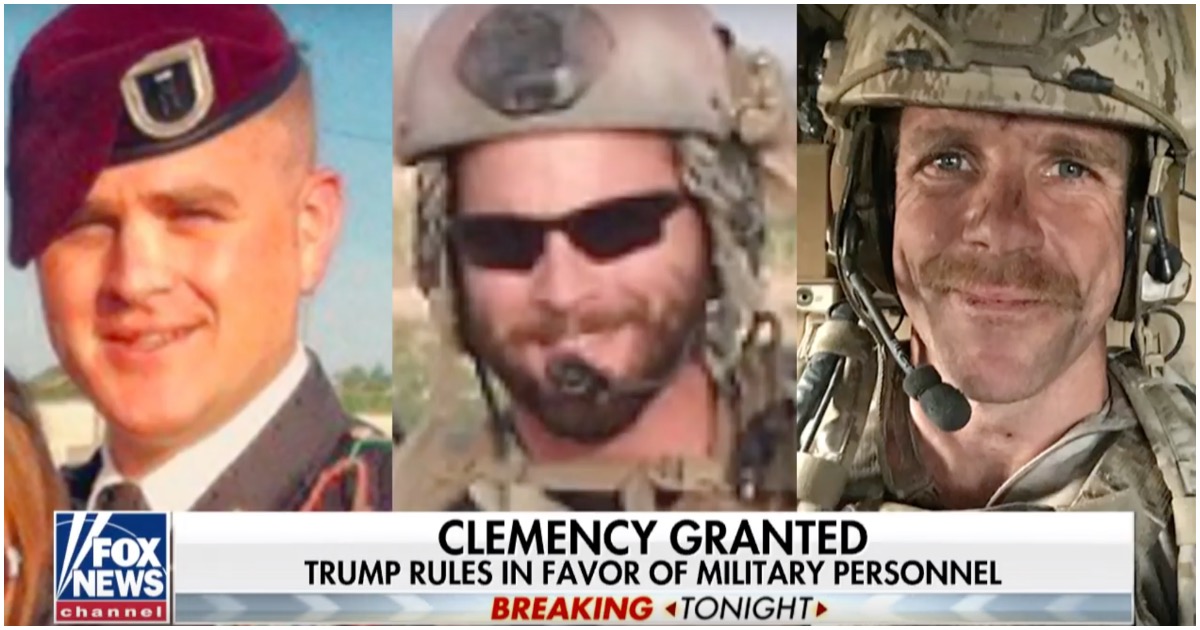 Eddie Gallagher became a household name for a little while due to a heavily-publicized trial where the Navy SEAL was accused of murdering an ISIS monster. Gallagher was found not guilty but was later convicted for posing for a picture with the monster’s dead body.

On Friday, Gallagher’s rank had been restored. Also, two men accused of war crimes were granted clemency by Trump. Here’s the deal, via From Fox News:

President Trump has granted clemency to two Army officers accused or convicted of war crimes and restored Navy SEAL Eddie Gallagher to the rank of chief petty officer after he was docked a pay grade after being convicted of posing for a photo with a dead Islamic State (ISIS) fighter, the White House announced Friday.

Army 1st Lt. Clint Lorance could be released from the military prison at Fort Leavenworth, Kansas, as soon as Friday evening, six years after being found guilty of second-degree murder. Maj. Matt Golsteyn, a former Green Beret, will have the murder charge against him dropped.

[Gallagher’s] punishment included a reduction in rank from chief petty officer to 1st class petty officer, which would have cost him about $200,000 in retirement funds. His family and defense team were fighting to have his rank restored.

Statement from SOC Eddie Gallagher 🇺🇸 • • “There are no words to adequately express how grateful my family and I are to our President – Donald J. Trump for his intervention and decision. @realdonaldtrump @vp • • We would also like to thank the American people for their unwavering support during this very difficult time for my family and I – we can never thank you enough. • • In addition I would like to thank my wife Andrea and children Treven, Ava, and Ryan. My brother Sean, my family and friends who stood by me as well as ~ Bernie Kerik, Tim Parlatore and Marc Mukasey and my entire legal team for their hard work and diligence on my behalf during our fight for justice. • • I truly believe that we are blessed as a Nation to have a Commander-in-Chief that stands up for our warfighters, and cares about how they and their families are treated. • • Our military is the best in the world, and with steadfast and supportive leadership; like we have in this President, our fighting force will only get stronger. • • God bless the United States of America, our President, and the men and women in our armed forces and their families.” • • Edward ‘Eddie’ Gallagher Chief U.S. Naval Special Warfare 🐸🔱🇺🇸

Not only is the war hero a former Navy SEAL, but he’s an all-around good guy who has facts on his side.

Crenshaw has gone toe-to-toe with numerous Democrats since winning a seat in Congress, and he has shown no sign of slowing down anytime soon.

Hey “journalist,” maybe you should check your facts. I am a co-sponsor. Nice try though.

Ali then tried once more, because why not, right?

Thanks for letting me know. I'm glad you did and I have no problem correcting and updating the record with facts. Now try it with your comments about Ilhan Omar. You'll feel better. Sincerely, a fellow patriot. https://t.co/6bAsYBpxsY

Flashback: Confused Biden Says First Thing He Will Do As President Is Defeat Donald Trump [Video]

Ginsburg died peacefully, unlike the tens of millions of babies whose violent murder she advocated
September 23rd, 2020 DC Clothesline