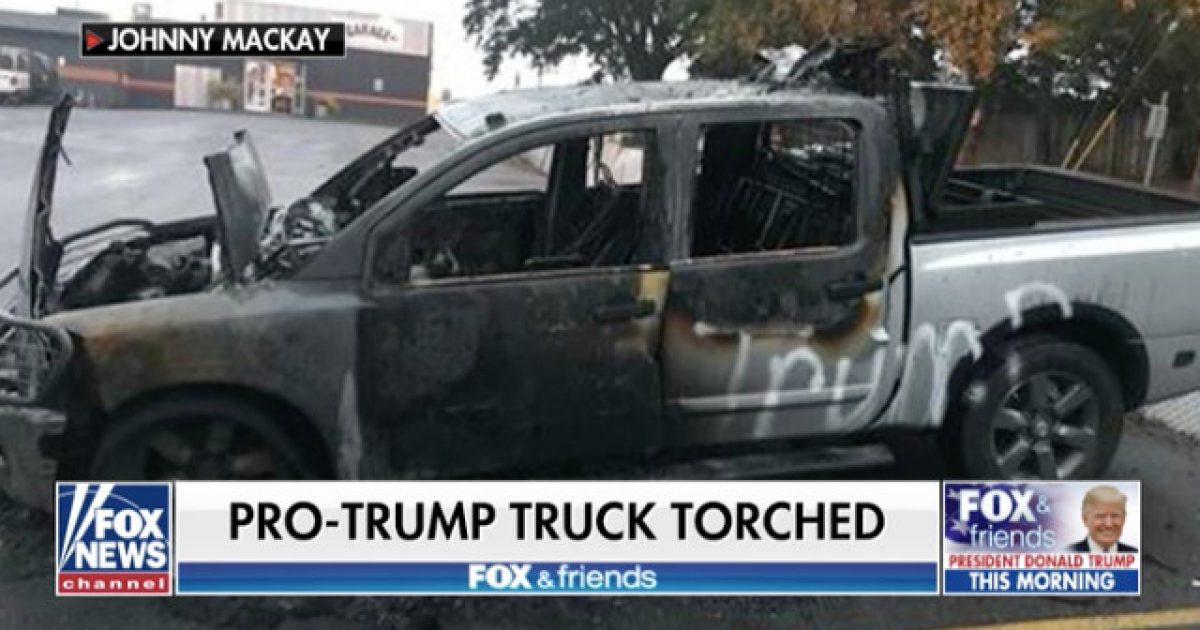 A man from Washington State had his truck torched and vandalized with spray paint all because the vehicle was adorned with bumper stickers related to President Donald Trump.

Johnny MacKay went to a bar in Vancouver, Washington where he had a few drinks and decided to be a mature, responsible adult and call an Uber to take him home. His truck was left overnight in the bar parking lot where the incident took place.

The truck had two stickers on the bumper in support of President Trump, one of which read: “TRUMP 2020.”

MacKay was shocked the next morning to find his truck destroyed, as he said the “tires were melted, the windows were shattered.”

The word “Trump” appeared to be spray-painted in large white letters across the body of the vehicle.

On “Fox & Friends” Thursday, MacKay said the woman who reported the fire said the truck originally had “Fk Trump” spray-painted on it, but some of the letters were scorched off by the blaze.

He said he’s certain it was a targeted, anti-Trump attack, and he’s hopeful that law enforcement is able to track down the suspect or suspects.

“The bar has surveillance video and I believe a few other neighbors might have additional video footage,” MacKay said.

He said he currently plans to vote for Trump in 2020, as he’s not overly impressed by any of the rumored Democratic challengers.

This is how dangerous it’s becoming to show any sort of support for President Trump, which is absolutely ludicrous. This is America. People are allowed to support whoever they want for any political office and no one, left or right, should have their property or physical safety put in jeopardy for any reason.

We should all be able to connect with one another enough to not wish violence and harm on those who see the world differently than we do. It’s just absurd how far people are willing to go to express their hatred these days.