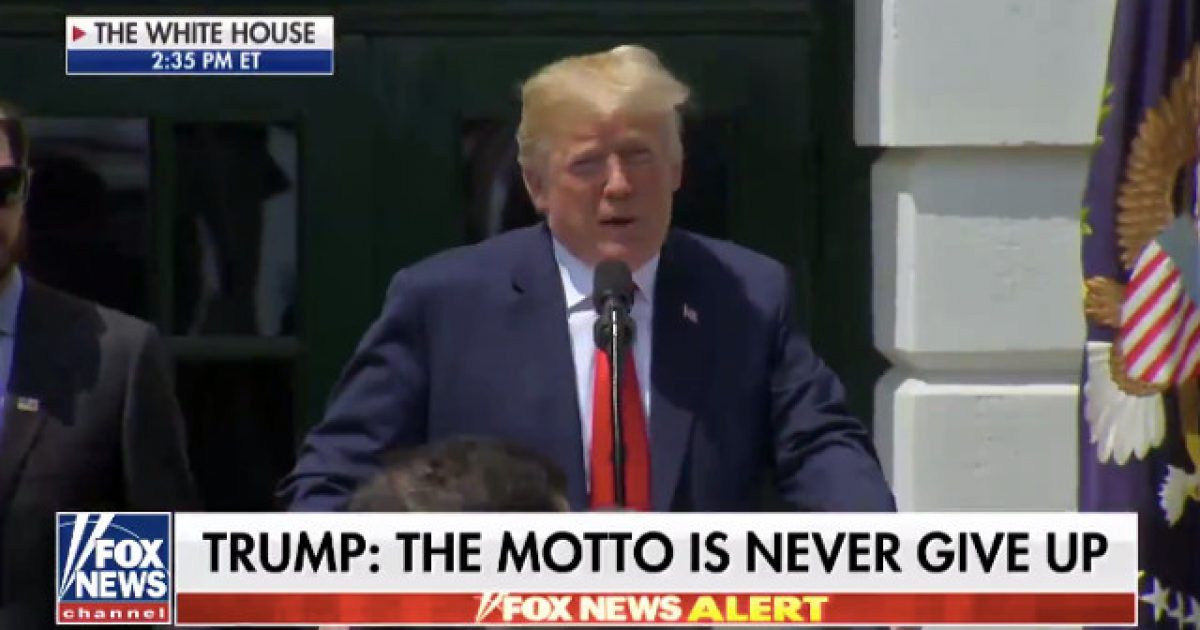 While the president never came out directly and delivered a targeted zinger at the NFL or professional football players in general, he still put them on blast in a round about way for not standing for the National Anthem as a form of protest against police brutality.

Here’s what Trump had to say:

“At every NASCAR race, you will see thousands of patriotic Americans from the grandstands to the pit stalls proudly waving our flag and roaring with joy at the words, ‘Start your engines,’” Trump said.

Trump added that Truex and NASCAR CEO Brian France should be proud of something else, Fox News Insider said.

“And I will tell you, one thing I know about NASCAR, they do indeed, Brian, stand for the playing of the national anthem, right?” Trump remarked. “They do indeed.”

.@POTUS: "I will tell you one thing I know about @NASCAR, they do indeed Brian, stand for the playing of the National Anthem." pic.twitter.com/dGK6jJflzz

Trump noted that later on someone told him that perhaps he ought not say anything about the anthem controversy as it could make someone mad.

As you might expect, Trump wasn’t a bit concerned with whether or not such a statement would be found offensive.

“Somebody said, ‘Maybe you shouldn’t say that. That’ll be controversial,’” Trump noted. “I said, ‘That’s okay. NASCAR’s not going to mind it at all.’ Right, fellas?”

The bottom line in regards to the whole “taking a knee” during the National Anthem is pretty simple. Don’t do it.

It’s fine if these players want to use their massive platforms to champion a certain cause, but they need to do so on their own time. When these individuals step out on the field, they represent their team to the world, and when they come out in favor of something on the field, it makes it seem as if the whole team is supportive of that same issue.

It’s disrespectful to the men and women who gave up so much to protect our liberty and way of life. It’s a proverbial slap in the face.

Let’s hope this next NFL season sees much less controversy than the last several have.

VIDEO: Woman Claims She Was Raped by Cop, But Body Cam Footage Paints a Different Picture