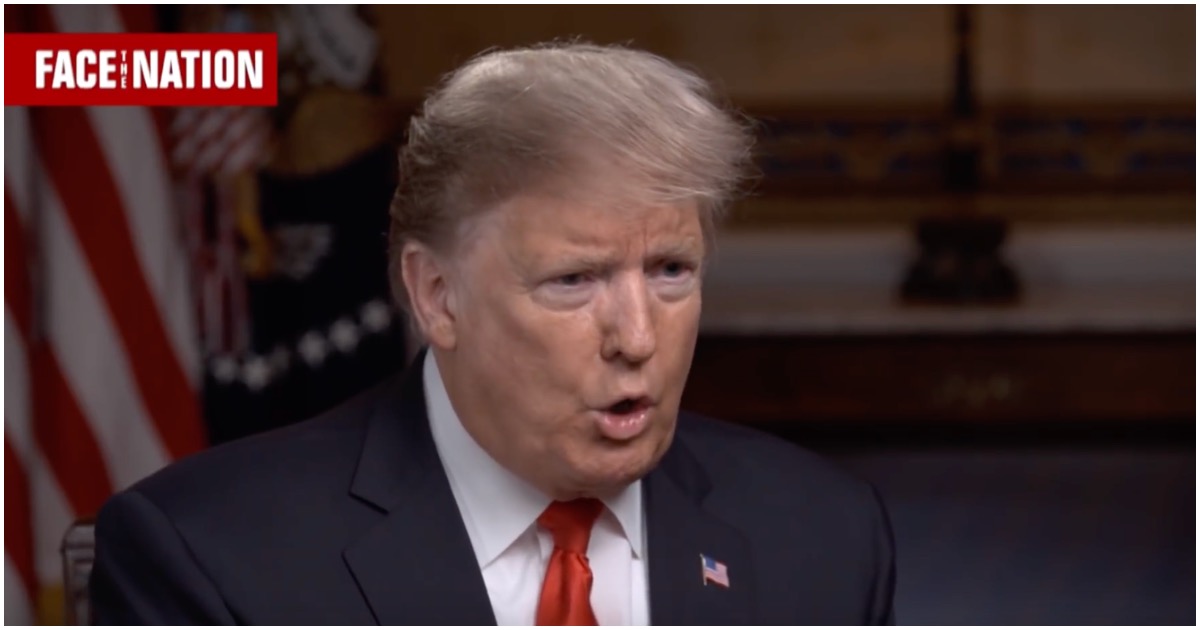 The thing some people love about President Trump is that he’s blunt and doesn’t waver in his beliefs.

He could not have been more direct when he blamed Speaker Nancy Pelosi for “people dying all over the country.”

In a preview clip of an interview that will air Sunday on CBS’s “Face the Nation,” President Donald Trump blamed “people dying all over the country” on House Speaker Nancy Pelosi (D-CA).

“Well, I think that she was very rigid — which I would expect — but I think she’s very bad for our country. She knows that you need a barrier. She knows that we need border security. She wanted to win a political point. I happen to think it’s very bad politics because basically, she wants open borders. She doesn’t mind human trafficking or she wouldn’t do this.”

“She’s costing the country hundreds of billions of dollars because what’s happening is when you have a porous border and when you have drugs pouring in, and when you have people dying all over the country because of people like Nancy Pelosi who don’t want to give proper border security for political reasons she’s doing a terrible disservice to our country.”

In case you were wondering, yes, Trump can build the wall using a different section of the US code…

[Trump’s] authority is even stronger in the field of combating drug smuggling, even without the declared health crisis. 10 U.S.C. § Section 284 allows the secretary of defense, upon request from federal or state law enforcement dealing with drug trafficking, and in conjunction with the secretary of state, to “provide support for the counterdrug activities or activities to counter transnational organized crime.” Subsection b(7) allows the DOD to provide help in the form of “construction of roads and fences and installation of lighting to block drug smuggling corridors across international boundaries of the United States.”

This is not some parsimonious loophole for an excuse to build a wall. This is the whole enchilada, folks. The main reason we need a wall is to combat the smugglers and the cartels who use the migration to bring in their contraband and dangerous criminals. Last October, the DOJ designated MS-13, Cartel de Jalisco Nueva Generacion (CJNG), Sinaloa Cartel, and Clan del Golfo as transnational crime organizations (TCOs).

Things are about to get wild!