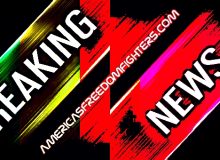 For a while there, it really did appear as though a 2024 rematch between incumbent President Joe Biden and former Commander in Chief Donald Trump would be rather close…but not anymore.

Biden had been on an undeniable upswing as of late, with a number of polls showing his approval rating going from abysmal to merely dismal, and his team has been working on the timing and the message of his reelection campaign announcement.

But then he got caught smuggling classified government documents to a number of his personal and professional properties, in a scandal that makes Donald Trump’s Mar-a-Lago storage of federal files look mundane in comparison.

The new has drastically shifted public opinion of Biden, and put Trump back in the 2024 driver’s seat.

Trump at 46 percent leads Biden’s 41 percent in the survey, with 13 percent who said they were unsure.

Trump also leads Vice President Kamala Harris by even more, with Trump at 48 percent, Harris at 40 percent, and 12 percent undecided.

And, perhaps just as important is how Trump fares against his potential GOP usurpers.

It is also worth noting that Trump is outperforming Florida Gov. Ron DeSantis in both hypothetical contests, against either Biden or Harris. While DeSantis still also leads both, he leads by less in each instance. Against Biden, DeSantis leads by just three percent—with 42 percent to Biden’s 39 percent and 18 percent undecided—and against Harris, DeSantis also only leads by three percent, 43 percent to 40 percent with 17 percent undecided.

In the GOP primary, Trump has a 20-percent lead over DeSantis as well, at 48 percent to DeSantis at 28 percent. No other candidate gets double digits in this survey, with former Vice President Mike Pence coming in at seven percent, Sen. Marco Rubio (R-FL) and former United Nations ambassador Nikki Haley at three percent, and Sens. Ted Cruz (R-TX), Tim Scott (R-SC), and former Secretary of State Mike Pompeo each at one percent, while two percent said someone else and six percent are unsure.

DeSantis has yet to make any official announcement regarding his potential candidacy, but the Florida Governor has been performing a number of telling political maneuvers of late leading many to believe that he’ll be throwing his hat in the ring soon.

Andrew West
As a lifelong advocate for the dream promised us in the Constitution, Andrew West has spent his years authoring lush prose editorial dirges regarding America's fall from grace and her path back to prosperity. When West isn't railing against the offensive whims of the mainstream media or the ideological cruelty that is so rampant in the US, he spends his time seeking adventurous new food and fermented beverages, with the occasional round of golf peppered in.
TRUMP V. BIDEN: Latest '24 Poll is a DOOZY
Pelosi Turns on Biden? Latest Comments on 2024 are ASTOUNDING
GIBBERISH: LA Sheriff Claims Shooter Had 'Assault Pistol'
Biden Provides Offensive, Flippant Response to Doc Scandal Question
BYE BYE BUREAUCRATS! Gaetz Introduces Bill to Abolish 3-Letter Agency
See more...
Advertisement

Davos? Do We Save the Planet or the Souls of Mankind?

There will be plenty of trouble and warfare right up to the end or the second coming of Christ, but it is not until the final war known as Armageddon that the kingdoms of men will be handed over to God alone.

Angry Biden Grasps for His Script When Reporter Asks About Classified Documents Scandal: 'There's No There There'

President Joe Biden was clearly miffed when a reporter asked him about his mishandling of classified documents.
By Jack Gist, Western Journal  January 23, 2023 Comment MoreShare

In a December 2020 podcast, just two months prior to his death, Rush Limbaugh warned Biden the “regime” could one day turn on him.
By Elizabeth Stauffer, Western Journal  January 23, 2023 Comment MoreShare
Next