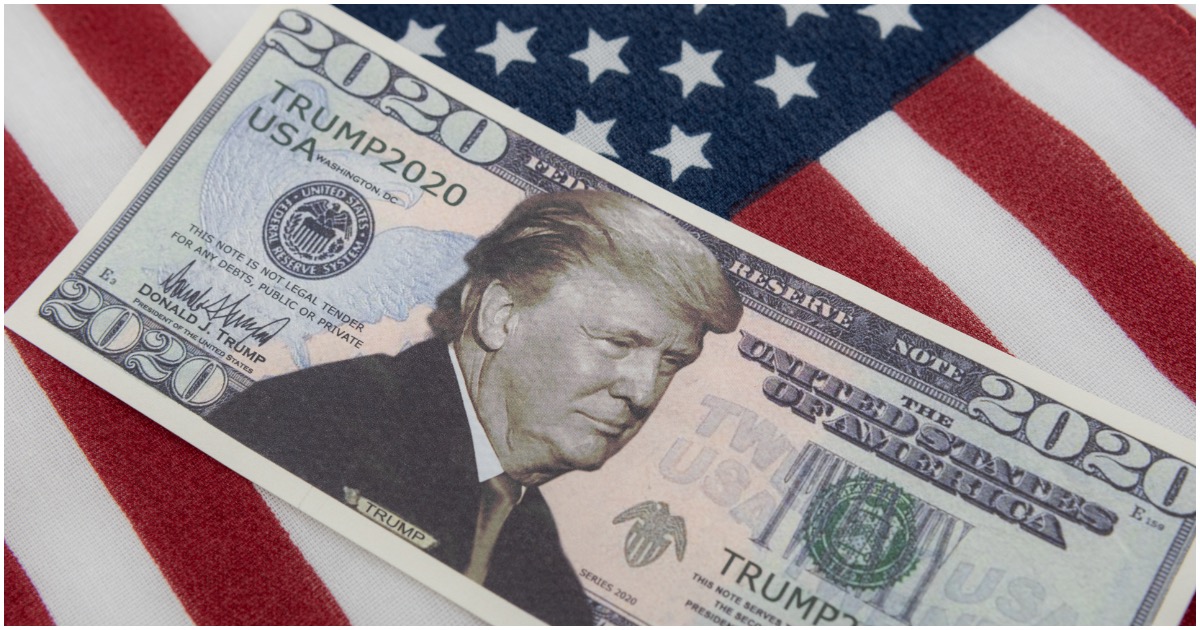 Washington is in full impeachment mode. As a result, Washington is paralyzed and can’t do a thing for the American people. None of the Socialist Democrat candidates for the president will get much, if any airtime. And fundraising is impacted too.

Trump’s campaign reports, in fact, that his fundraising has ripped through the stratosphere since House Speaker Nancy Pelosi announced her fake impeachment inquiry on September 24. NPR reports, much to their chagrin, that together the Trump campaign and the Republican National Committee have raked in a record $125 million.

The Trump campaign and the Republican National Committee took in a huge haul in the third quarter, which ended Monday — a combined $125 million.

This means that this year alone, they’ve raised more than $300 million — double the total that then-President Obama and the Democratic Party had raised at this point in 2011 on Obama’s way to a successful reelection bid.

But there’s a big difference between now and 2011 — President Trump is facing an impeachment inquiry. The campaign claims that this move by House Democrats helped supercharge Trump’s fundraising.

According to a new book set for release on November 26, not only is the Trump campaign correct that impeachment has boosted GOP fundraising – the 2016 campaign gave clues that this result could have been expected.

The book is Inside Trump’s White House: The Real Story of His Presidency by Doug Wead. Wead is a former adviser to two presidents and the author of multiple best-sellers. Trump and the Trump family gave him astonishing access in the run-up to the inauguration, and have all sat for interviews and extended conversations with him in the years since. Where Michael Wolff’s discredited Fire and Fury book included falsehoods, innuendo and insinuation, and stops after the first few months of the Trump administration, Wead’s work is based on first-hand knowledge and continues deep into 2019 as re-election has gotten underway. Wead’s book promises to be the definitive inside history of the Trump presidency. Whereas Wolf’s fantasy “work” will occupy the fiction section right next to the Steele dossier.

According to Inside Trump’s White House, Jared Kushner recalls how the Access Hollywood tape actually helped the 2016 campaign.

“The Billy Bush thing was kind of critical,” Jared said. He was referring to the Access Hollywood video, the October surprise. “Our online donations went from about $1.4 million a day to $2.6 million a day.”

The infamous Access Hollywood tape emerged on Oct 7, 2016 – a true “October Surprise” intended to swing the election in Hillary Clinton’s favor. The RNC’s reaction to the tape’s disclosure was to try to convince Trump to drop out of the race, by presenting him with only two alternatives: Either he stays in and loses by the most lopsided landslide in American history, or he drops out. Trump’s reaction was typically Trumpian:

According to multiple Trump family eyewitnesses he said, “Nice. I don’t want either one.”

Trump stayed in. The Access Hollywood episode revealed a resilience to Trump’s candidacy that no other candidate had ever enjoyed. Apart from the country’s trust in Trump, this failed torpedoing of his campaign reflected an equal distrust of a corrupt and deeply biased press. It also helped that Hillary Clinton was the worst and most reviled candidate in U.S. presidential election history.

“What happened is that our people started rallying around us,” Jared Kushner told me. “As the Republican establishment started to abandon us and started condemning Trump, the rank and file Republicans rose to support us. The RNC quickly learned that the base of their party was actually with Trump.”

And that appears to be the case now. Polls show steady support for Trump among Republicans well after Pelosi’s impeachment announcement. Recent disclosures, such as the fact that Democrat Rep. Adam Schiff misled the country about having early access to the Ukraine so-called whistleblower before they ever filed the “urgent concern” complaint. This suggests an orchestrated attempt to get Trump…again. Add to that his reading of a fake accounting of the alleged offending phone call with the Ukrainian President into the Congressional record during an official hearing of the House intelligence committee. The parallels with the Access Hollywood episode are glaring.

The press is even worse today than in 2016. Hillary has been replaced by the equally loathsome and untrustworthy Schiff/Pelosi combo. And once again Trump’s core supporters are sticking by him, sensing another manufactured political setup. The Trump nation is assured that impeachment is just the latest in a long string of efforts to accomplish what Dems can’t at the ballot box.

Trump’s fundraising has doubled up over Obama’s from the same period in first term. Obama was supposed to be the world-changing lightworker, and the media consistently sung his praises, ignored his scandals, and propped him up despite weak poll numbers. But Trump has matched Obama’s popularity at several key points – and is crushing “the Chosen One’s,”fundraising.

Additionally, as in the Access tape episode, Trump opted not to hide anything in the Ukraine phone call. In both cases, he ripped up the usual Washington playbook – the one perfected by the lying and dishonest Clinton machine – and released the transcript and the leaker’s complaint as soon as he could. He’s trusting the American people to see through the spin from Democrats in and out of the media. In turn, he’s offering Republicans a new playbook – push back, hard, relentlessly, and in the end, win.

Inside Trump’s White House: The Real Story of His Presidency debuts November 26.

Chris Salcedo, is a nationally recognized radio talk show host heard on WBAP is Dallas TX and KSEV in Houston TX. He is the author of the Ayn Rand style novel Liberty Rises, and the Executive Director of The Conservative Hispanic Society.

Flashback: Biden Says ‘Politicians Can Take Away’ the First Amendment ‘If We Want’ To [Listen]

U.S. Troops Pulled From Syria Will Go To Iraq To Continue Fight Against ISIS