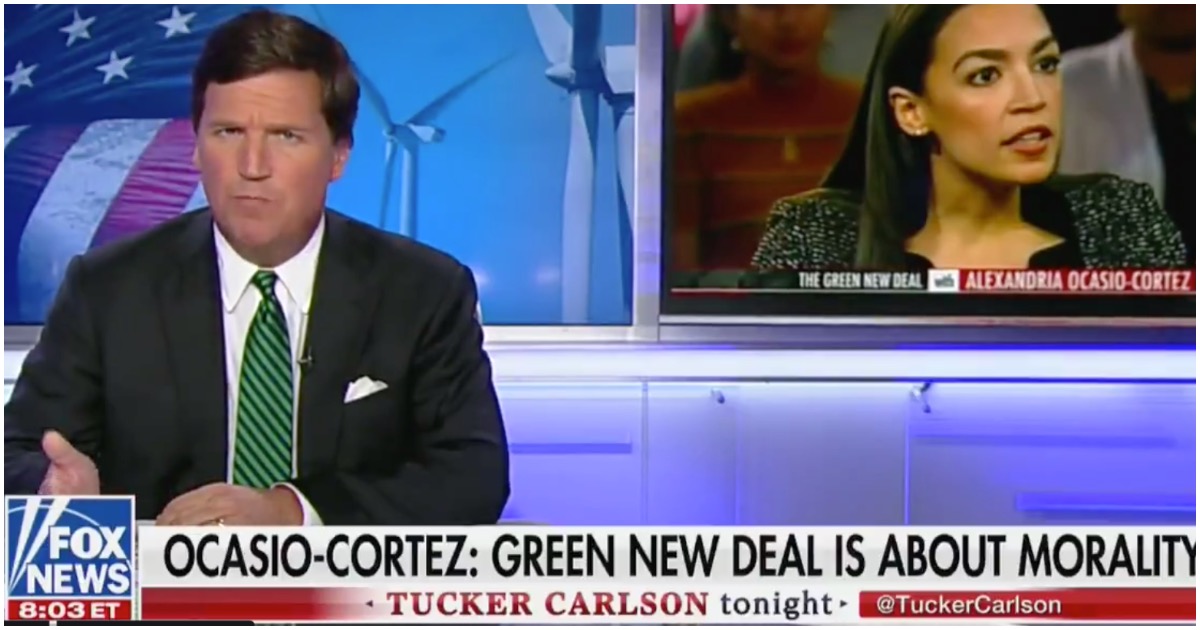 Fox News host Tucker Carlson unloaded on freshman Democrat Socialist Rep. Alexandria Ocasio-Cortez (NY) in a way no other TV personality has yet to do.

He called her quite a few names, in the process.

Fox News’ Tucker Carlson slammed socialist Rep. Alexandria Ocasio-Cortez (D-NY) on Monday after she participated in an MSNBC town hall last week that was designed to promote her and her far-left ideology.

Carlson also took aim at MSNBC’s Chris Hayes, who hosted the town hall, saying Hayes “is what every man would be if feminists ever achieved absolute power in this country: apologetic, bespectacled, and deeply, deeply concerned about global warming and the patriarchal systems that cause it.”

Carlson noted, “[The town hall] apparently seemed like a wise idea to executives at MSNBC. The very same news outlet that spent two years lying to you about Russia brings you a 29-year-old former bartender to teach you about science.”

Tucker added, “Listen to her explain how she doesn’t resort to ad hominem attacks unlike her enemies who, by the way, are xenophobic white supremacists. So it’s official, Alexandria Ocasio-Cortez is a moron, and nasty, and more self-righteous than any televangelist who ever preached a sermon on cable access. She’s not impressive, she’s awful.”

Tucker Carlson slams Ocasio-Cortez: "So it's official, Alexandria Ocasio-Cortez is a moron, and nasty, and more self-righteous than any televangelist who ever preached a sermon on cable access. She's not impressive, she's awful."pic.twitter.com/iIfwu0ylRa

Ocasio-Cortez’s poll numbers are in the garbage.

It’s not hard to see why. AOC constantly finds a way to stick her foot in her mouth.

What’s even more sad is that she routinely doubles down on her mistakes, which only serves to exacerbate the situation.

During a recent town hall in her home disrict, Ocasio-Cortez (NY) was heckled.

Congresswoman Alexandria Ocasio-Cortez recalled how her public-school teachers thought she needed “remedial education” because she had grown up speaking Spanish at home.

Specialized high school parents heckle @aoc at an education town hall and you won’t believe what happens next pic.twitter.com/JiewjeJQWU

She can’t be too thrilled about that.