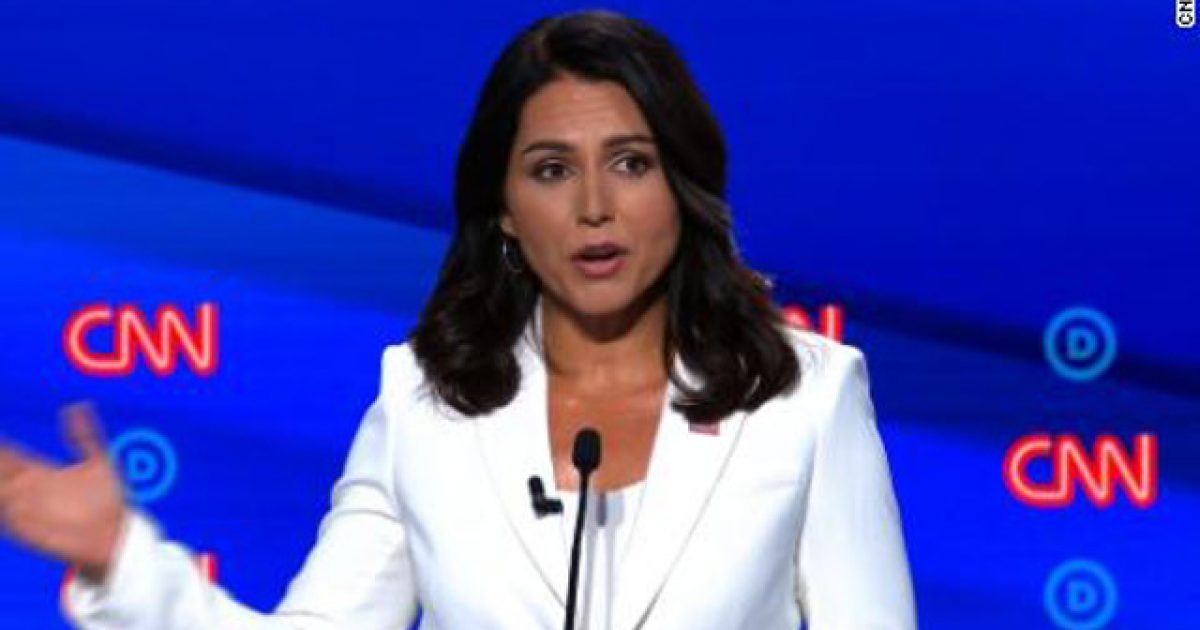 Gabbard stated, “So I enlisted after 9/11 to protect our country, to go after those who attacked us on that fateful day, who took the lives of thousands of Americans.”

Then Gabbard attacked Trump, snapping, “The problem is that this current president is continuing to betray us. We were supposed to be going after al Qaeda. But over years now, not only have we not gone after al Qaida, who is stronger today than they were in 9/11, our president is supporting al Qaeda.”

Gabbard attacking Trump for supporting al Qaeda was ironic considering that prior to the debate on Wednesday, three U.S. officials stated that intelligence reports acknowledged that Hamza bin Laden, the son and likely successor of former al Qaeda leader Osama bin Laden, was dead. CNN noted that a U.S. official informed CNN that the United States had a role in his death.

A report by the New York Times clearly states that Hamza bin Laden was killed within the last two years, during President Trump’s current time in office. The Times added that the United States played a role in the operation that led to this man’s demise.

Strangely, Gabbard seemed to completely ignore that news, which clearly points out that Trump is taking the fight to these disgusting degenerates. That hardly sounds like lending the group support. In fact, it sounds a whole lot like destroying the group’s leadership, which scatters the sheep so to speak.

Perhaps these politicians running for office need to do a much better job at researching the issues of the day before setting foot on the debate stage?

Gillibrand Slams Trump With Lame ‘Clorox’ Joke; Internet Bursts Her Bubble By Bringing Up Her Past

Kayleigh McEnany Slams Jen Psaki, I Didn’t Do A “Ton Of Circling Back”
March 8th, 2021 The Lid

9 Signs That Chess Pieces Are Being Moved Into Place For A Major War In The Middle East
March 8th, 2021 DC Clothesline