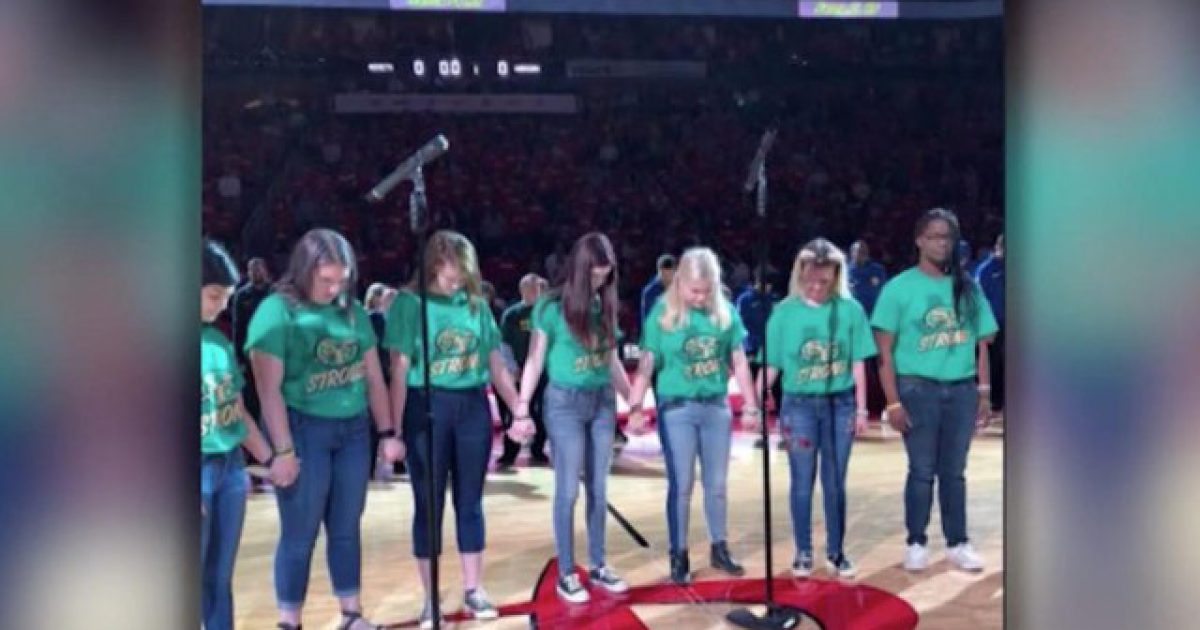 A group of Santa Fe High School students who recently had a picture of themselves posted on Twitter at an NBA game found themselves the target of progressives on social media who defaulted to their favorite tactic and labeled the photo as “racism.”

These students attended the school that recently had a deadly school shooting take place, meaning many of these kids probably lost loved ones and friends in the incident, so the tossing out of the race card is in extremely poor taste.

Anyway, once the trolls started slobbering all over themselves in an eager effort to attack these poor kids and make themselves look “woke,” one girl’s mother decided to fire back and set the record straight.

The Golden State Warriors NBA team invited the students and first responders from the school to sing the national anthem and to hold a moment of silence for the victims of the shooting before the game.

The NBA posted the picture on their Twitter account, and immediately it started garnering negative attention. Why? Because all of the girls holding hands in the photo were white and no one was holding the hand of the only black girl featured in the photo.

But why is Nobody holding the black girls hand…. https://t.co/zfmhvqY3sw

The "black girl" is my daughter. It's people like you that keep the race crap stirred up. You just look for ways to make things about race. These girls are her friends. You have no idea what you are talking about so you just need to shut up.

As you might expect from all the mighty, mighty social justice warriors, many folks on Twitter still gave this girl and her mother the business:

my daughter didn't want to cry before she had to sing and holding hands would have caused her to start crying that's the story nothing about race.

I have a birth certificate which you will not be seeing. This is us at senior parent night for band. pic.twitter.com/LQA4D83nxq

I let her read these post. Y'all are doing a damn good job.

I love this girl to the moon and back. pic.twitter.com/B6ZsTBosrs

Lynda told KHOU the image the NBA posted to Twitter did not capture every student on the court, which is important because the students not in the image also were not holding hands.

“When Nicole came out of her room Saturday morning, she was upset that they had turned this into a race thing, because she knew what was real. To make something so simple into a race issue was just absolutely ludicrous,” Lynda said.

“It’s very disappointing that people are going to take a race issue out of a picture with nine grieving girls in it. I grieve in my own different way. I don’t like to be touched. When we had that moment of silence, I didn’t want to grab anyone’s hands because I didn’t want to break down before we sang [the national anthem],” Nicole added.

How sad is it that folks on the left are so desperate to feel relevant that they will take anything they can find, no matter how small and insignificant, and attempt to transform it into a racial matter? It’s insulting, silly, and just plain ridiculous.

This poor girl was grieving, having lost people she knew well in a horrific attack that will leave scars she’ll never ever forget. And instead of allowing this to be a beautiful moment, intellectually challenged leftists blew it up into something it wasn’t and detracted attention from the reason these kids were at the game to begin with.