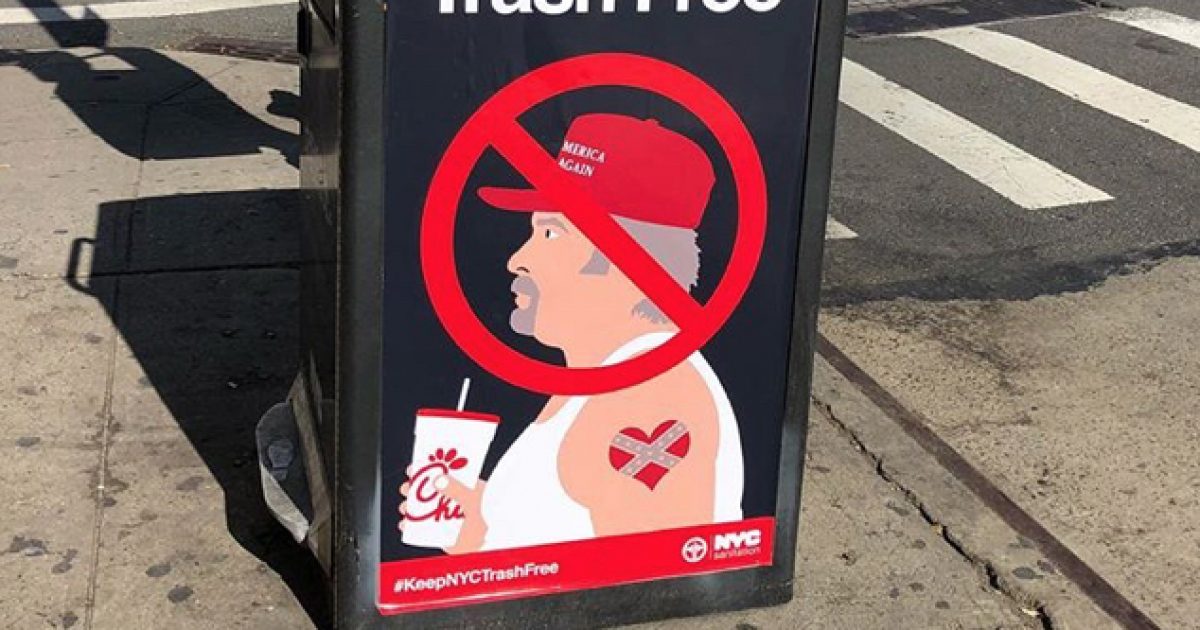 We can always look to the combative and influential “resistance” of the liberal left for the next escalation on the figurative political battlefield.

Our nation is one purposefully built for diversity of thought, with freedoms supposedly guaranteed in the Constitution to protect us from the encroachment of tyrants.  Unfortunately, this isn’t how the folks on the left tend to view the First Amendment and the idea of competing ideologies.

In fact, when confronted with an opportunity to listen and learn from gay conservative author Milo Yiannopolous, leftists at UC Berkeley literally rioted instead, forcing a cancelation of Yiannopolous’ event.

Now, in what can only be described as the dehumanization of conservatives, a New York City street artist has placed disturbing posters around the Big Apple.

This NYC trash can is telling #MAGA types where they can go: https://t.co/T5E9yg9CRF #KeepNYCTrashFree pic.twitter.com/eGrhPyKXJ6

And, because it had to be said:

To all "liberals" who want to #KeepNYCTrashFree :
Remember when Germany tried the same? Let me remind you: pic.twitter.com/hvYYKQnarW

Once again, we are facing a segregation of Americans down political lines.

If we have learned nothing from history itself, it is that this sort of division is dangerous.  We know that dehumanization and the degradation of civility are key components in the fascist handbook, yet we still allow this sort of malignant hatred to continue in a nation where we are all free to pursue happiness.

This isn’t the America we were promised by the founding fathers, and it will take a massive dose of humanity to right the ship.

After seeing this latest batch of “art” from NYC, I’m not sure that everyone in this country is on board with that plan.