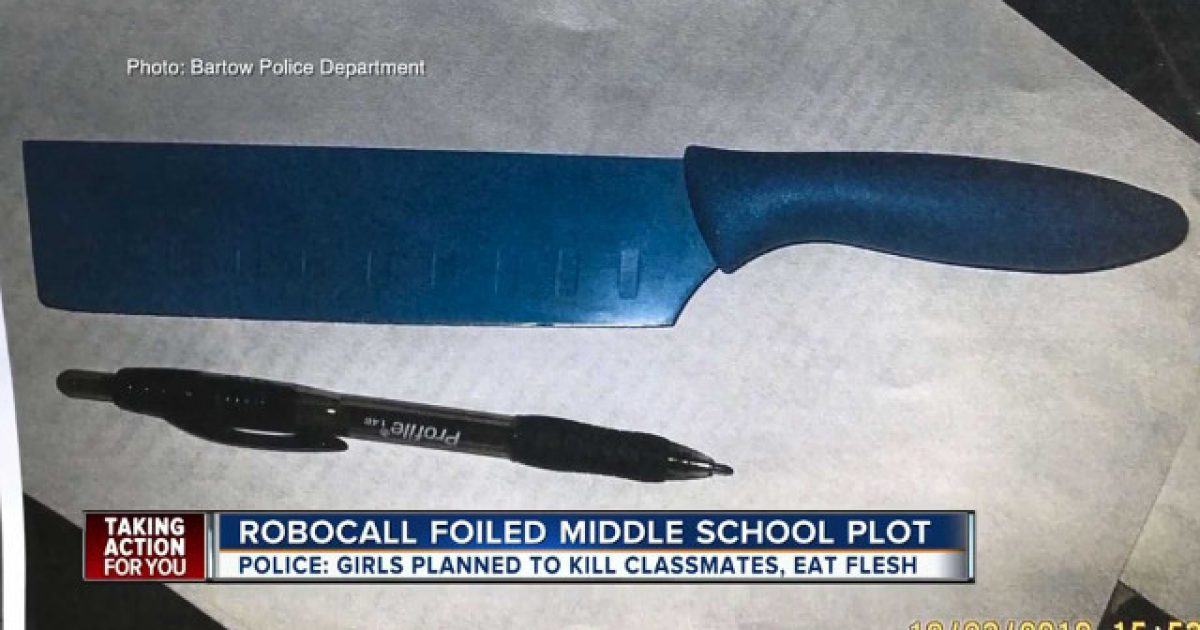 Florida law enforcement officials managed to foil a disturbing plot involving two young middle-school girls — who claim to be satanists — that were fully prepared to murder classmates and then drink their blood from a goblet they had in their possession.

If you needed any more reasons to not support the public school system, here’s one more you can add to your ever growing list. As The Offspring famously stated, the kids aren’t alright.

The 6th and 7th-grade girls, ages 11 and 12 respectively, were arrested at Bartow Middle School on Tuesday after they brought weapons to the school and admitted to plotting the attack. ABC Action News reports:

When asked about motivation, the girls reportedly told police that they were Satan worshipers. According to police, the girls planned to drink their victims’ blood out of the goblet they were found with. They also discussed eating their victims’ flesh and leaving body parts at the school’s entrance before killing themselves.

“They noted that they wanted to kill at least 15 people and were waiting in the bathroom to find smaller kids that they could overpower to be their victims,” Bartow Police Chief Joe Hall said. “I believe that these two small children, I’m going to call them small children, they are only 11 and 12, seriously sat down and plotted to do bodily harm to another student at school.”

Authorities were warned that “something bad” would happen at the school on Tuesday after a student warned a teacher on Monday that they overheard one of the girls talking about the planned attack.

The school, which summoned extra police officers to the school to deal with the threat, found the two girls in the bathroom after one of the girl’s mothers called the school in response to receiving a robocall alerting her that her daughter was not at school, which triggered a campus-wide search for her.

“Once in the principal’s office, the girls were told to empty their pockets, which revealed a knife and knife sharpener,” ABC Action News added. “After that, their bags were searched, and several weapons including a pizza cutter and butcher knife were found on the girls. The two admitted to planning to kill students as they entered the bathroom.”

The girls, who are currently sitting in lock up, are now being charged with a “conspiracy to commit murder, possession of a weapon on school property, and disrupting a school campus.”

This is incredibly disturbing, however there is one thing that needs to be addressed. Apparently folks are blaming horror films for the reason these kids acted out the way they did.

That’s not at all true. Millions upon millions of people watch horror films every day and none of them act this way in real life. There’s obviously some mental and spiritual problems plaguing these girls. Only the gospel of Jesus Christ can invade their souls and renew their hearts and minds.

We cannot blame outside sources for problems that stem from the inner person, as doing so abdicates those individuals from personal responsibility for their own actions.