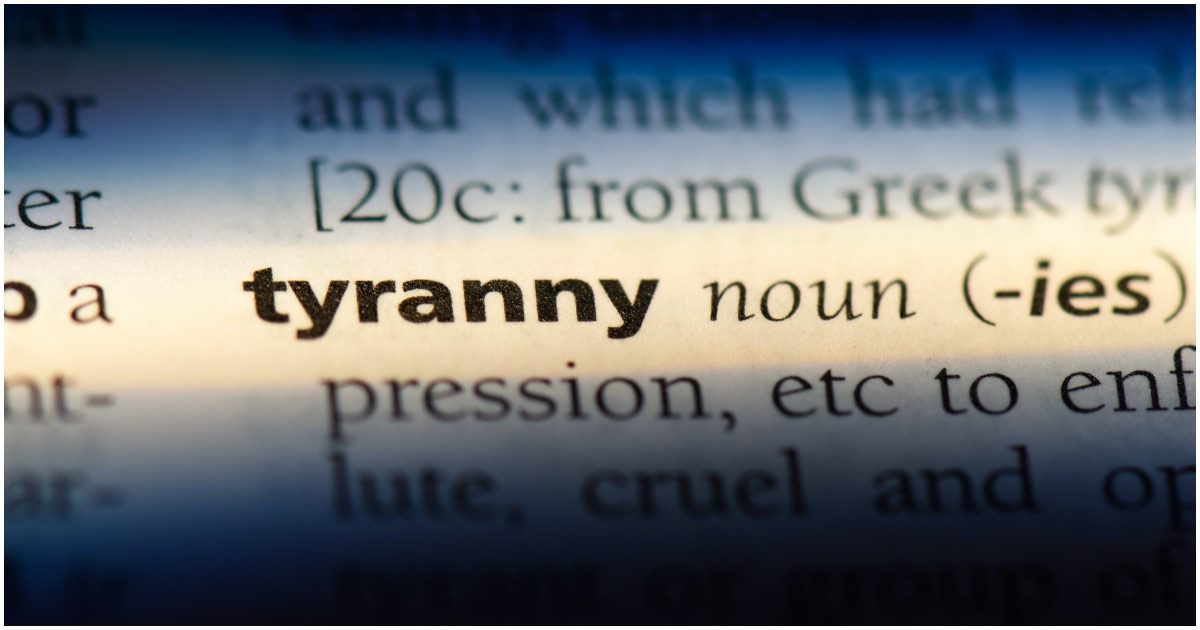 Why do men lust for power over other men? Here, I refer to “men” in the classical sense, as in “mankind.”

This ubiquitous human failing is rooted in hubris, ignorance and insecurity. It has also proven to be as contagious and deadly as any plague. Genocides have grown out of such tyranny when people tried too late to reject authoritarianism and the sick ideologies that have often accompanied it.

Some, including myself, are stupefied by how few people understand the difference between being asked to do something and being ordered with the power and force of government to do it.

Before coronavirus changed life as we formerly knew it, we saw numerous manufactured protests over false stories and petty grievances. The primary complaint was usually that the offending word or action constituted tyranny. On it’s face, it was ridiculous.

Today, those same Leftist agitators and protestors could not have rushed fast enough to comply with orders that are the very definition of tyranny. Not only have they complied but they’ve been among the first to bully those who dare to question or maybe even protest!

How did we arrive at a place where so few Americans understand the definition and the preciousness of Liberty?

Indeed, it appears that we are dealing with an ugly virus which is deadlier to some age groups and geographic areas than others, but the same politicians who have zealously shut down entire states have stubbornly rejected any good news. They are committed to ramping up fear which makes it conveniently more likely that citizens will view their extreme orders as necessary and proper.

It took governor Jared Polis of Colorado 45 minutes into one of his numerous press conferences to mention that 9 out of 10 people won’t require any medical treatment at all–not even an aspirin. We’re thankful this isn’t the Bubonic plague. If it were, heightening public fear would hardly be necessary.

The more that Americans dutifully comply with increasingly strict orders from politicians and government bureaucrats to shut down their lives and their livelihoods and confine themselves to their homes, the stricter and more stringent those orders continue to become.

In Laredo Texas people are now required to wear a face mask when going out in public or risk a $1,000.00 fine. New York’s Socialist Mayor didn’t just demand that churches and synagogues close, but he threatened to shut down one synagogue “permanently” because they defied his orders.

New Jersey Governor Phil Murphy is telling families to distance themselves from one another even inside their own homes. Can video policing be far behind? In some states, phone companies have made cell phone location data available to government officials to enable mass enforcement of stay-at-home orders.

Authoritarianism breeds even more authoritarianism and, like a virus, it spreads. We now have “social shaming” and spying on one’s neighbors, all with the nodding encouragement of the same government bureaucrats who continue to ramp up fear and intimidation.

The virus of tyranny has also spread from governor to governor, from “asks” to orders, and then, to fines, punishment and threats of imprisonment. It hasn’t mattered how biased, subjective or extreme their dictates and demands have been. For example, pot shops and public transportation have been deemed essential in Colorado, but traveling alone in one’s private vehicle or visiting Hobby Lobby are considered “non-essential” and are therefore, forbidden. Is it merely a coincidence that the former two things have been perennial favorites of the Left while they have always detested the latter two things?

Perhaps most disturbing is that so many Americans don’t understand that they live in the most exceptional country in history precisely because it was created to afford every citizen the greatest possible individual freedom and personal responsibility. America’s power and prosperity, which Socialists have so desperately wanted to blunt, was built on exactly those values.

If Liberty isn’t held as a moral imperative, a virus, or anything else, can and will become the excuse to rob us of it.

As the virus of tyranny continues to spread through our nation, it is not only possible but essential that we take care of our Liberties as well as our health. If we don’t, we will lose both.

ICYMI: Common Anti-Parasite Drug Might Be Able to Kill Coronavirus In Only 48 Hours (Report)