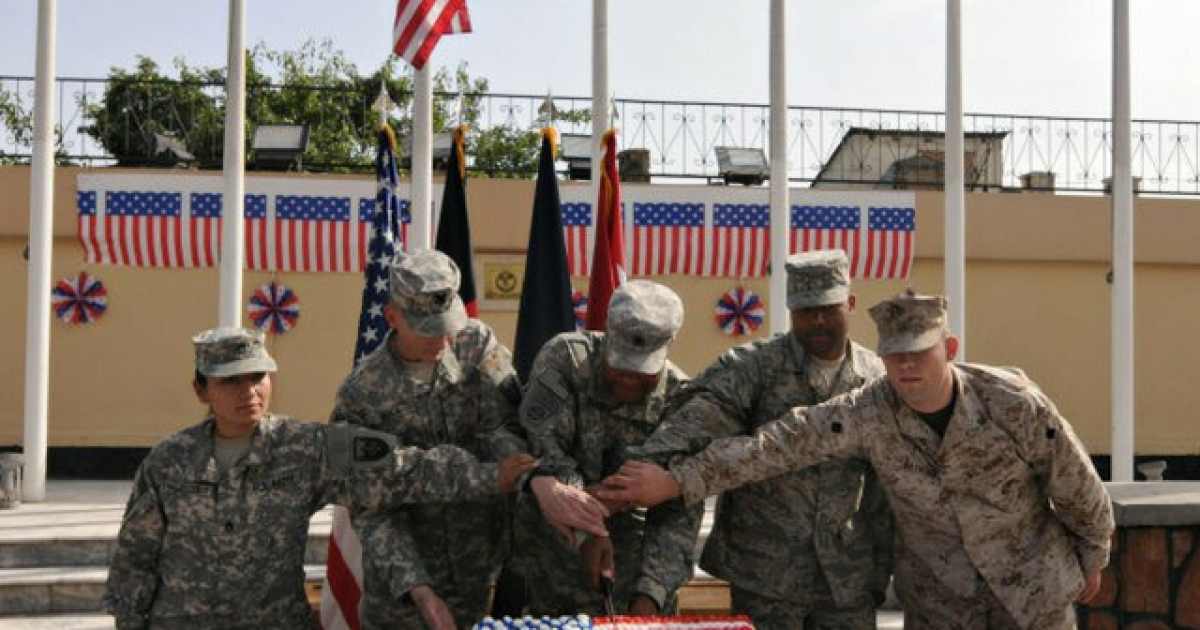 On Wednesday, millions of free Americans honored the birth of our nation with barbeques, parades, and lots and lots of fireworks. Hopefully, many took a moment to appreciate and pray for our troops overseas, to whom the 4th of July takes on an added significance as they honor the day in the midst of conflict.

Breitbart reports that our troops in Afghanistan, who have been faced with a recent wave of terrorist bombings in Kabul as the Afgan Taliban and their supposed rival, ISIS, have been hitting the city hard.

Despite being thousands of miles away from home and engaged in such a messy battle, our armed forces were treated to a fun–but reverent–Independence Day celebration.

U.S. service members in Kabul took a moment’s respite from the wave of terrorist bombings in Afghanistan in recent months to enjoy a lunchtime ceremony in honor of America’s 242nd Independence Day on the Fourth of July.
“It’s an important holiday because we fight for it,” U.S. Army Cpl. Ruby Cruz of the 191st Regional Support Group Forward from Fort Allen, Puerto Rico, told Stars and Stripes in Kabul.

Acknowledging that she missed the celebrations back home, she added, “But we have fun here, too, so it’s not too bad.”

A barbecue dinner in the evening is expected to follow the Fourth of July ceremony at the headquarters of the U.S.-NATO mission known as Resolute Support (RS).

“American flags could be seen in all corners of NATO’s Resolute Support headquarters in Kabul on Wednesday as U.S. service-members celebrated Independence Day,” Stars and Stripes reports.

U.S. Gen. John Nicholson, top commander of American and NATO forces in Afghanistan, made a statement to mark the occasion:

For American servicemen and women who are deployed overseas, this day holds a very special significance, and it reminds us of the tremendous sacrifices made by previous generations of patriots in all of America’s wars in defense of liberty at home and abroad. …We hope Afghans will remember this, that reconciliation is possible between rivals.

After 17 years of conflict, Trump’s singular goal in the region is reconciliation between Kabul and the Taliban.

On Independence Day and every day, we honor our troops and thank them for their sacrifice as well as the sacrifice of countless brave men and women who have given their lives to protect our sacred liberty.

The 4th of July celebrates the birth of our nation, which was founded on the principles of liberty and freedom. On this #IndependenceDay, we send thanks and wishes to our troops at home and overseas as they continue to protect our nation. @CJTFOIR @ResoluteSupport pic.twitter.com/NhxNGaUqdN

Yes, Someone Really Did Try to Climb the Statue of Liberty to “Protest ICE”. Here’s What We Know