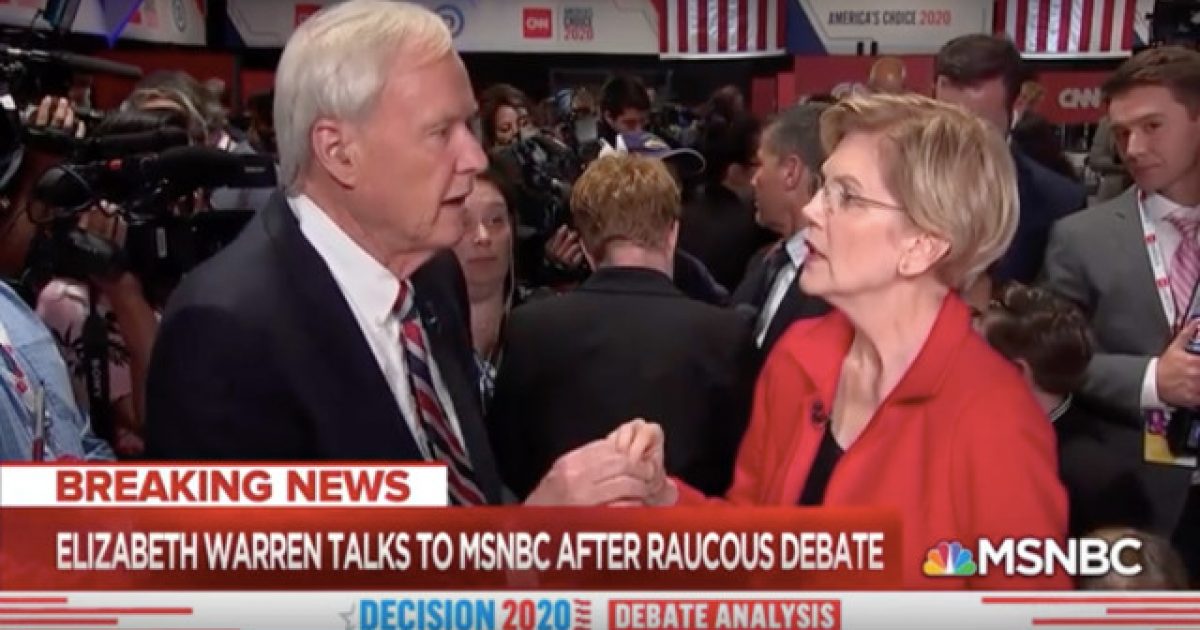 In one of the more tense exchanges, Matthews asked Sen. Elizabeth Warren about the cost of her “Medicare for All” policy proposal. He asked Warren several times how much the plan would cost the average American taxpayer, but he never really received a clear answer from her.

This clearly left Matthews frustrated, who later took a shot at her by saying, “Warren wouldn’t answer that question.”

“Medicare for All” will cost taxpayers more money, Matthews told Warren. “You guys dodged that tonight. … How much will your taxes go up?”

Warren refused to answer, suggesting the real question is, “How much are your costs going to go up?”

“I know that argument, but you’re covering it,” pressed Matthews.

“‘Medicare for All’ is cheaper than our current system — that’s the Republicans’ version,” Warren said.

“I know the argument,” answered Matthews, “that you put it all together and you reduce the cost of healthcare premiums, and you get more benefits, therefore you come out ahead, but will you pay more in taxes? Why don’t you want to answer that question?”

“It’s a question about where people are gonna come out economically,” contended Warren.

Warren, again, refused to answer. “The question is about costs,” she said, about how much you’re “digging in your pocket” to pay healthcare costs.

To give you a little insight into how much the overall program would cost, private insurers would go the way of the dinosaur and a whopping $32 trillion is what it would take to cover every single American.

For a little context, that’s currently $10 trillion more than our national debt.

Sounds like an absolutely horrid idea, right? Can you imagine how much or our income would have to be taxed to pay for that? Sure, health care would be paid for, but we’d be virtually unable to pay any of our other bills. Surely, these folks can understand basic math, right?

Of course they can. They just don’t care. They confuse government responsibility with personal responsibility. Plus, they want to stay in power as long as possible, so they promise the moon to their voters, knowing they cannot actually deliver on these promises.

Unfortunately, liberal voters actually think they will and keep voting for them. Time to wake up, folks. There’s no such thing as a free lunch.