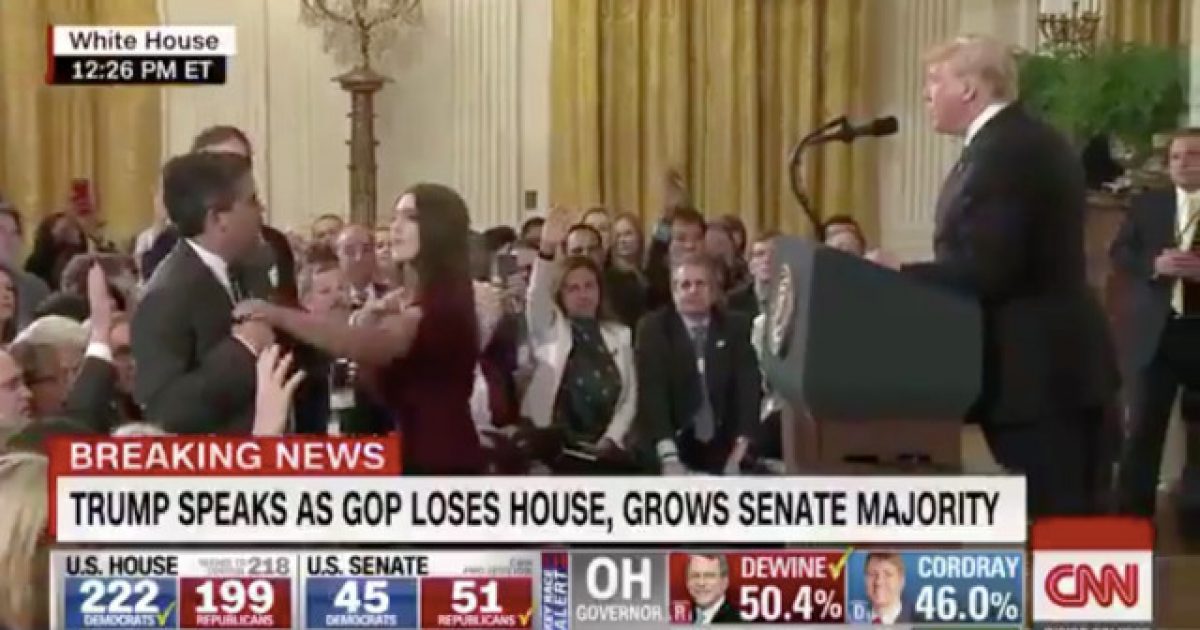 The talk of the town this week, as far as it concerns President Trump, is the massive blowup he had with obnoxious CNN reporter Jim Acosta. The altercation occurred during a press conference, which featured the president repeatedly putting Acosta back in his place for his rude and unprofessional behavior.

One of the major topics of discussion to come out of this messy situation has to do with Acosta’s egregious behavior toward a female aide who attempted to take the microphone from him so that another reporter could ask a question.

Accusations arose that Acosta touched the aide, which was one of the primary reasons his pass got rejected. CNN attempted to debunk that accusation, but only ended up proving it was true.

“The White House announced tonight that it has revoked the press pass of CNN’s Chief White House Correspondent Jim Acosta,” CNN Communications said in a statement. “It was done in retaliation for his challenging questions at today’s press conference. In an explanation, Press Secretary Sarah Sanders lied. She provided fraudulent accusations and cited an incident that never happened [emphasis added]. This unprecedented decision is a threat to our democracy and the country deserves better. Jim Acosta has our full support.”

“President Trump believes in a free press and expects and welcomes tough questions of him and his Administration,” Sanders tweeted. “We will, however, never tolerate a reporter placing his hands on a young woman [emphasis added] just trying to do her job as a White House intern…”

President Trump believes in a free press and expects and welcomes tough questions of him and his Administration. We will, however, never tolerate a reporter placing his hands on a young woman just trying to do her job as a White House intern…

CNN Communications then tweeted out this video showing that Acosta did exactly what Sanders said he did:

Here is a video of the interaction for the world to see: pic.twitter.com/us8u5TWzDz

Sanders stated that Acosta touched the young woman. The video clearly shows that’s exactly what happened. Therefore, CNN is the one lying by denying that happened, not Sanders.

Lots of leftists, the same folks who are supposedly #MeToo, are jumping all over this young lady saying she was the aggressor and more or less brought this on herself. Isn’t that victim shaming?

What would the response of these same leftists be if this girl were an aide to Obama and the reporter was from Fox News?

This 10-Year-Old Girl Thwarted a Bad Guy’s Plan to Kidnap Her. Take a Look at What She Did.