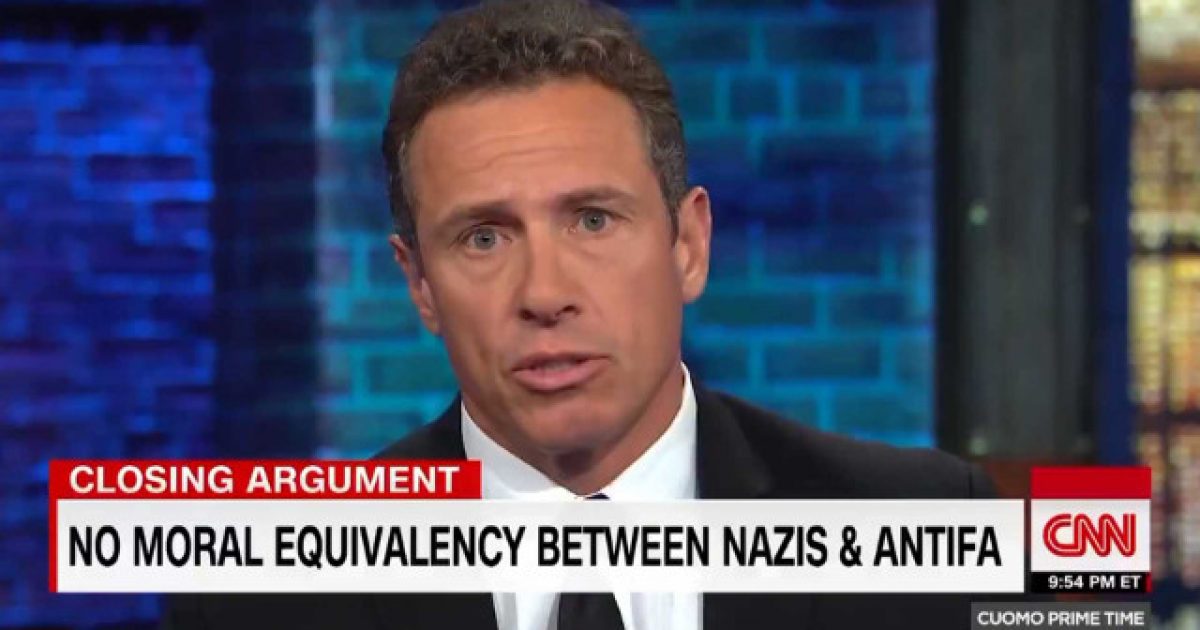 Earlier in the month of August, CNN host Chris Cuomo gave a partial defense of the radical left-wing group Antifa, who seem to be embracing violence more and more with each passing day, stating that “fighting hate matters.”

Here’s a snippet from his comments on the group to help provide a little context for the rest of the story:

“I argue to you tonight, all punches are not equal morally. In the eyes of the law, yes. But in the eyes of good and evil, here’s the argument: if you’re a punk that comes to start trouble in a mask and hurt people, you’re not about any virtuous cause. You’re just somebody who’s going to be held to the standard of doing something wrong. But when someone comes to call out bigots and it gets hot, even physical, are they equally wrong as the bigot they are fighting? I argue, no. Fighting against hate matters.”

Well, Wednesday night on his program, Cuomo spoke with Steve Cortes, former Hispanic Advisory Council member to President Trump, where he asked Cortes if the president should apologize for making comments that stoke fear. And it all snowballed from their.

When Cuomo asked Cortes if Trump should apologize for “stok[ing] that kind of fear” about potential violence, Cortes argued that Trump isn’t stoking fear, but rather recognizing that the “very unfortunate reality in America is that political violence is on the rise, on both the right and the left.”

Cuomo clearly wasn’t satisfied with that response, again expressing alarm at Trump’s statement that there are “violent people” on the left.

“Who’s ‘them’?” asked Cuomo before Cortes could finish the thought.

“Antifa is ‘them,'” Cortes stressed, pointing to Trump’s direct reference to Antifa. As Cuomo maintained his look of befuddlement, Cortes continued: “Chris, look, when people, when a thug puts on a mask, whether that mask is a racist Klansman’s hood or whether it is a radical Antifa’s black mask … When they do that and when they resort to political violence, which has been done, on both sides, it is totally unacceptable in a decent society in America.”

“Who disagrees with that? If you break the law, then you’re a rioter and a thug and criminal,” said Cuomo.

“You know who disagrees unfortunately, Chris?” Cortes responded. “You do. Because you equivocated on this very point on your show.”

Before Cortes could get his full statement out, Cuomo launched into his indignant self-defense, in which he made clear again that he believes that violence from far-left Antifa is different than violence from far-right racists.

“I never equivocated on anything!” insisted an agitated Cuomo in a raised voice. “You let your righty mouthpieces twist my words for effect to enhance a bigoted agenda, and now you’re going to sell it — and it’s a mistake on this show. I said very clearly and people can check my words, ‘You break the law you’re a criminal and a thug!’ I said don’t create a moral equation between those who preach hate and those who fight it because not all punches are equal. And I stand by that. But I never endorsed Antifa. Don’t sell B.S. to my face! Do it behind my back where you’re better at it!”

Cuomo went on to say that he’s not “pro-Antifa” — though if you read those initial comments above, it certainly seems he has a soft spot for the group, wouldn’t you agree? Seems like it!

Here’s a clip of the exchange:

"I never endorsed Antifa. Don’t sell BS to my face. Do it behind my back when you are better at it." @ChrisCuomo hammers @CortesSteve for suggesting, wrongly, that he had equivocated on Antifa on the show https://t.co/SvldeeDk20 pic.twitter.com/XbUWhVOAe1

There’s absolutely no room for physical violence in modern day political discourse in America. We have liberty and freedom to speak our minds in a civilized manner, engaging each other’s worldview by presenting facts and well made arguments.

Unfortunately, doing that takes a degree of tolerance for another person’s point of view, and despite claims to the contrary, the left does not possess said tolerance. If they did, much more civil discourse would be had in this country and our nation wouldn’t be stagnating.

The Disgusting, Sexually-Charged Way This Netflix Show Mocks Christianity Will Make You Sick