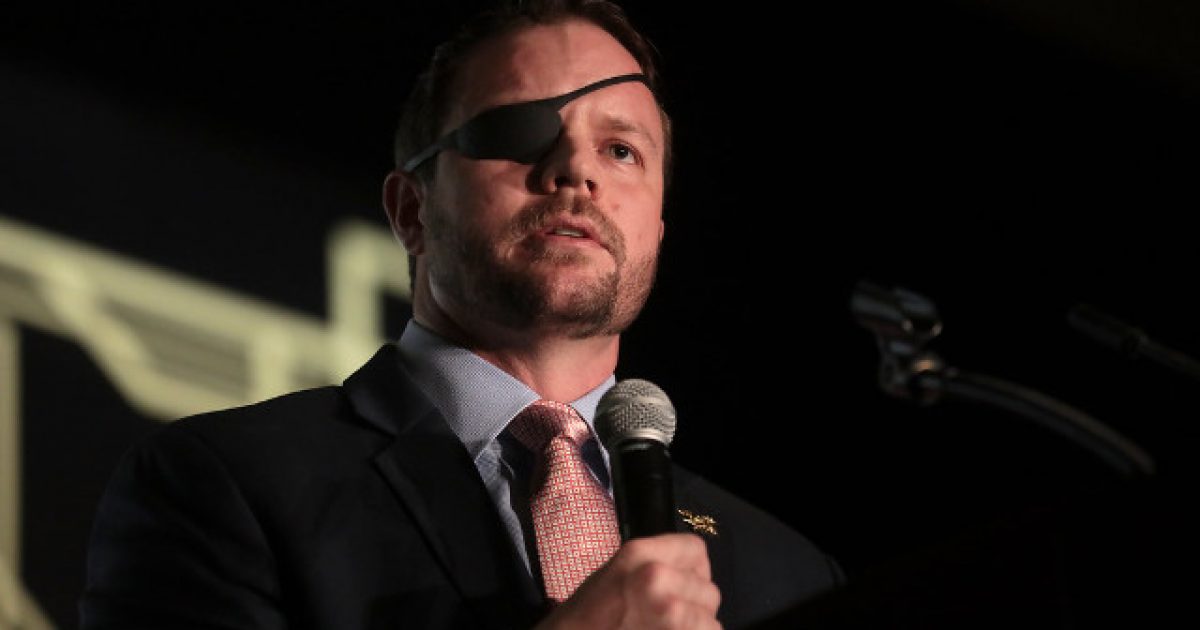 Rep. Dan Crenshaw has received a lot of negative feedback from his response to the two mass shootings that took place in El Paso, Texas and Dayton, Ohio over a week ago, but he’s not backing down from what he said that stirred up all the controversy, opting instead to clarify what his remarks meant.

Here’s what Crenshaw had to say about the blowback via The Daily Wire:

“Earlier this week, President [Donald] Trump indicated his support for something called red flag laws. I stated on Twitter that maybe we should consider them at the state level, maybe we should have a conversation about it, and it should be a conversation,” Crenshaw said. “Unfortunately, that’s not what happened.”

It’s clear that there has been some confusion about what conservatives would support when it comes to laws that try to better protect our communities. Let’s address this directly. Watch. pic.twitter.com/TRYjPIclEm

“Clearly even the words ‘red flag law’ just emotionally triggered a lot of people, made you guys really mad at me. It seemed that no amount of explanation was able to quell your fears or convince you otherwise, convince you that somehow the president and I had not betrayed you,” Crenshaw said. “That is not true, of course, and it’s sad that many of you think that, it really is.”

“When we say ‘red flag laws,’ you guys stop listening,” he continued. “You can’t hear what we’re suggesting because, understandably, you automatically assume that we’re just agreeing with the left’s version of that law and we all know that the left’s version would not be good, it would not protect due process. But as it turns out, that isn’t what we’re talking about at all.”

Crenshaw went on to explain, “Making sure that due process could not be abused is at the heart of any conservative solution to the supposed red flag laws. In our version of what those would look like, I’ve laid out specific safeguards that would have to be in place for us to support any type of red flag law.”

Crenshaw went on to give a few examples such as the requirement of clear and convincing evidence, punishment for false accusations, right to attorney and cross-examination, and limited standing to accuse.

“Here’s the thing, I understand your fears about bad red flag laws. Red flag law is a general concept. There could be good ones and there can be bad ones. You should be against the bad ones, as I am.”

Crenshaw concluded by stating, “The whole purpose of what the president did, and what I am doing, in trying to start a conversation about this is so that we take control of the narrative and propose solutions that actually do protect due process rights.[Let’s] ensure that we aren’t on the sidelines when Democrats are proposing blatantly unconstitutional laws that would not protect your due process.”

“It’s a conversation that conservatives have actually been having for a very long time. It’s not new at all and it definitely does not deserve the emotional reaction that it has gotten. We are better than that. Let’s be better than that.”

Here’s where a lot of conservatives go wrong on this issue, and to be honest, the reason they go wrong is the fault of greedy, gun hating leftists. There’s something that needs to be done in order to ensure that the chances of these mass shootings are reduced.

Unlike what the left says, there’s no way to eliminate them entirely. Unfortunately, mankind has been corrupted since the fall of Adam and Eve and the only thing that can renew the heart and spirit that leads to such great acts of evil is the gospel of Jesus Christ.

So aside from that, the way we can make folks the safest is to at least have a conversation about what can be done in this case that will not involve infringing on someone’s right to own a firearm.

It’s a complicated matter, but it’s a discussion we need to have, otherwise, eventually, the left will have the conversation for us after folks have grown tired of the violence, and we may not like how that plays out.

OH BOY! Tlaib Says Trump Is A ‘Danger to Our Democracy’ & Bernie Calls POTUS An ‘Idiot’