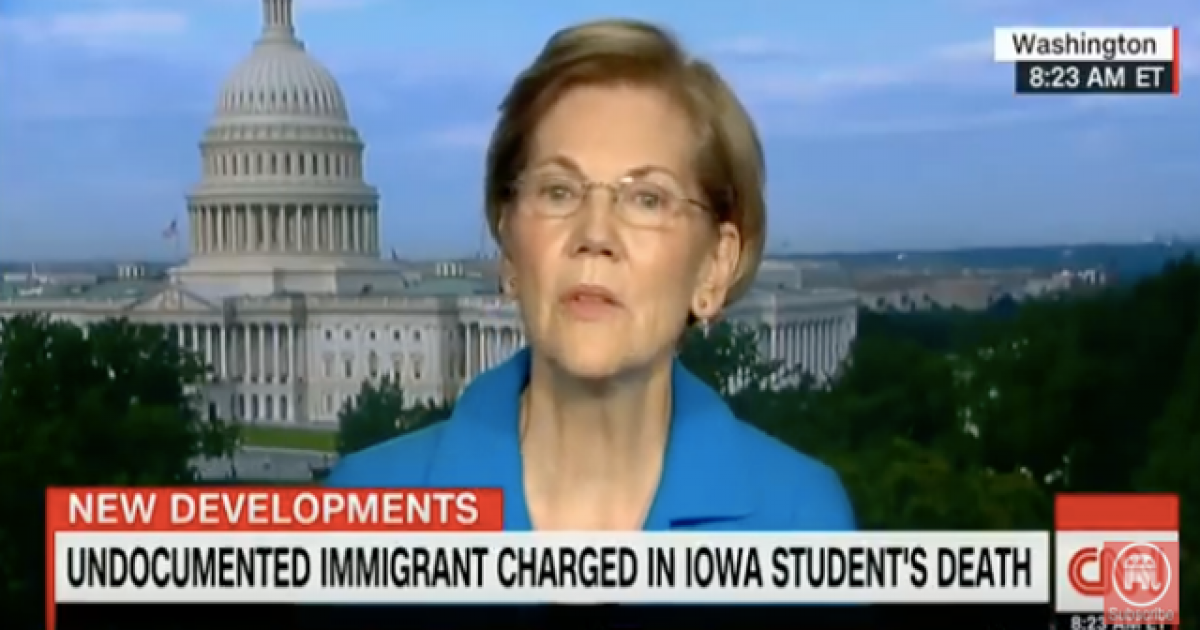 Sen. Elizabeth Warren made an appearance on CNN where she was asked by host John Berman to weigh in on the tragic murder of Mollie Tibbetts, a 20-year-old college student killed by an illegal immigrant.

True to the despicable form of the vast majority of progressive politicians, Warren took the opportunity to lament about how badly illegal immigrants are treated in America. Deplorable, right?

“I want to get one last question in here because it is a story, a very important story in the news, it has to do with Mollie Tibbetts, the young woman in Iowa who was murdered,” CNN host John Berman said. “Her body believed to be found yesterday. A person has been charged with it. This person the person is an undocumented immigrant.”

“Mike Pence and the President have suggested the immigration laws need to be stronger so that people like this man who is accused of this murder were not in the country,” Berman continued. “Your reaction?”

Warren responded by giving a quick one-sentence response expressing her sympathies for Tibbett’s family before she launched into a rant attacking the Trump administration for separating illegal aliens from their children at the U.S. border — a law enforcement action that has taken place for years.

“One of the things we have to remember is we need an immigration system that is effective, that focuses on where real problems are,” Warren said. “Last month, I went down to the border and I saw where children had been taken away from their mothers, I met with their mothers who had been lied to, who didn’t know where their children were, who hadn’t have a chance to talk to their children, and there was no plan for how they would be reunified with their children.”

“I think we need immigration laws that focus on people who pose a real threat and I don’t think mamas and babies are the place we should be spending our resources,” Warren continued. “Separating a mama from a baby does not make this country safer.”

Check out the video below.

How unbelievably calloused and out of touch is this lady? There is a family out there who had their daughter ripped away from them by the hands of a murderous individual who should’ve never been allowed in this country in the first place, and this is her response?

It truly seems sometimes as if folks on the left completely lack a soul.

The murder of Tibbetts is precisely why our immigration laws exist in the first place. To keep our citizens safe from degenerates who want to do nothing more than steal, rape, and kill.

Sure, not all illegals are like that, but the problem is, we cannot vet a person’s heart and know which ones harbor such darkness in their souls. It’s better to have a solid system in place that prevents folks like this from getting in and ships them home when they do.

One Week Later, the DNC Has Yet to Definitively Comment on Domestic Abuse Allegations Made Against Rep. Keith Ellison