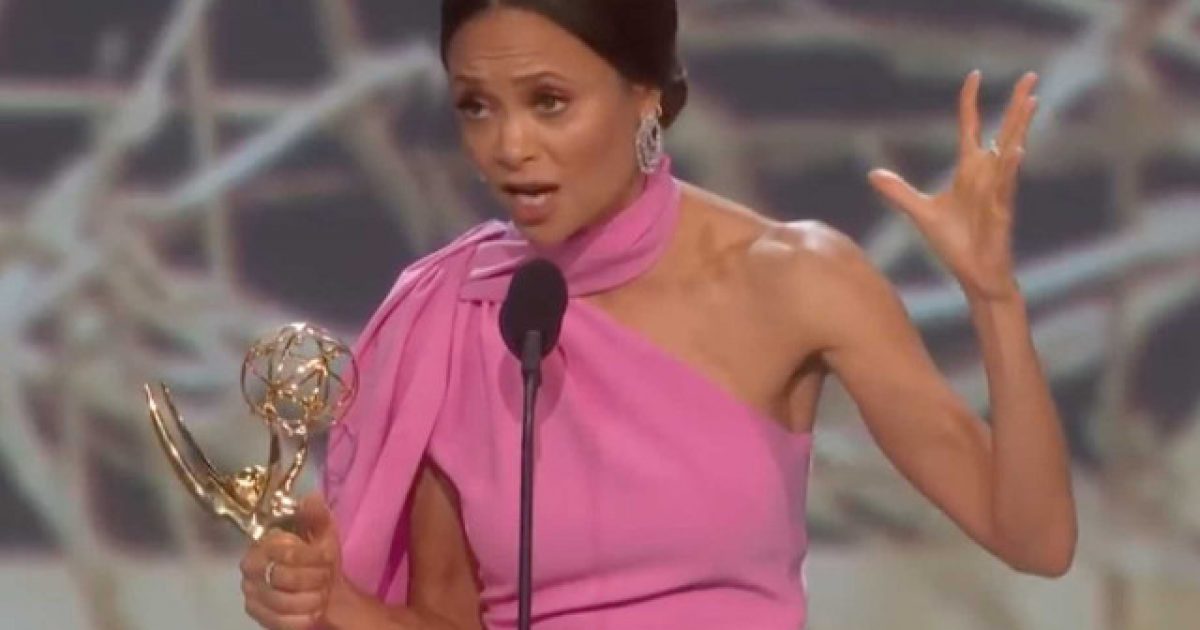 The talk of the town today has been the Emmy awards handed out Monday night, not because of some spectacular upset or amazing, life changing acceptance speech.

No, it’s water cooler talk today because there was so much left-wing nuttiness being spewed from the stage that it was enough to make you gag.

Now, to be fair, we all expected there to be a lot of Trump jokes and Kavanaugh chastising and so on and so forth. However, one actress, Thandie Newton, decided to up the ante and mock God, the holy, righteous, just, merciful, loving Creator of the universe.

Probably not a wise idea.

On Monday night, after she won a well-deserved Emmy for Best Supporting Actress for her role as Maeve Millay in the drama series “Westworld,” actress Thandie Newton decided to go for the classic leftist daily double: deny God exists but then claim God is a woman. Grasping her Emmy, Newton blathered, “I don’t even believe in God, but I’m going to thank her tonight.” Continuing in that vein, Newton opined, “I am so blessed; I am so blessed. Without this I am even so f**king blessed.”

After the usual litany of thank you’s to her coworkers and producers, Newton paid tribute to her daughter, whose birthday it was, saying, “I get to guide you and love you and protect you, which is my North Star. I love you so much.”

Newton’s foray into metaphysics brought approval from some delighted with her perspective:

Thandie Newton saying “I don’t even believe in God, but I want to thank her” and then dropping an f bomb just reignited the #Emmys⁠ ⁠for me pic.twitter.com/Xf0V8UAo1K

Wow. Just wow. The blasphemy here is atrocious, even for Hollywood.

Look, God is not male nor female because He’s a spirit and thus without a body. Except for Jesus, God the Son, who is obviously a man.

Her comment was a feminist dig at believers and was incredibly disrespectful. It’s sad that miscreants like Thandie get rewarded for their behavior, when that behavior is geared toward purposefully degrading the beliefs of others, something she herself no doubt claims to stand against.

Newton must be one of those folks who thinks it’s perfectly acceptable to hate on Christians, just not other religions. Like Islam for example.

Once You See What Actor Donald Glover Wore to the Emmys, It’ll Give You Nightmares